Exploring the Role of the SMN Pathway in Spinal Muscular Atrophy

As reduced gene expression levels are universal in SMA and underlie the core deficits and pathogenesis of the disease, a significant proportion of therapeutic strategies have focused on the restoration of functional full-length SMN protein levels.
By: Krithika Subramanian, PhD
Published: August 31, 2019
The concerted activity of motor neuron networks is the cornerstone of motor system functioning, which encompasses essential voluntary muscle activities such as speaking, walking, breathing, and swallowing. Disruption of these networks leads to motor neuron diseases such as spinal muscular atrophy (SMA) and amyotrophic lateral sclerosis.1 SMA is characterized by lower motor neuron degeneration; patients typically present with profound muscle weakness, which leads to muscle wasting and atrophy, immobility, and, in severe cases, respiratory failure and death.2,3 Advances in understanding the molecular and cellular basis of SMA, along with the approval of the first antisense oligonucleotide (ASO) gene therapy for SMA in 2016, represent “an exciting time” in SMA treatment,3 with the possibility of changing the disease course.

SMA is a rare, autosomal recessive, progressive degenerative neuromuscular disorder occurring in approximately 1 in every 6000 to 10,000 newborns. SMA is the leading monogenic cause of infant death and one of the most common autosomal recessive genetic disorders, second only to cystic fibrosis.1,4,5 Unlike many other neurodegenerative disorders, the general trend of functional loss in SMA is greatest at the onset of the disease, followed thereafter by a more gradual worsening.6 Patients with SMA share inactivating mutations in the SMN1 gene; the copy number of a partially functional paralog, the SMN2 gene, varies inversely with the phenotypic severity of SMA.6,7 Individuals with the most severe form of SMA (constituting about 60% of all affected individuals) retain only 2 copies of SMN2, whereas individuals harboring 3 or more SMN2 copies typically present with the milder SMA at later ages.6 SMA ranges in severity, rated types 0 to 4 (or 0-IV): prenatal/ neonatal onset, presenting with severe hypotonia and requiring respiratory support from birth (SMA-0); onset prior to 6 months of age, with rapid progressive muscle weakness and early mortality (SMA-1); onset in mid-infancy, typically before 18 months of age (SMA-2); and adolescent or adult onset with an indolent clinical course (SMA-3/4).5,8,9 Across the severity continuum, the pattern of muscle weakness is consistent; weakness is focused at proximal and truncal muscles but also affects the diaphragm and distal muscles of the limbs.6

The SMN1/2 genes reside on 2 sections of a large inverted duplication of chromosome 5q13; the major functional difference between SMN1 and 2 is a single-base-pair C→T change in exon 7, which results in an SMN2 pre-mRNA splicing alteration giving rise to a truncated transcript and, as a result, a truncated protein susceptible to degradation (FIGURE). In the absence of a functional copy of telomeric SMN1, the copy number of SMN2 dictates the amount of the full-length protein, with more copies corresponding to more functional full-length SMN protein and, consequently, the extent of compensation for SMN1 loss and SMA severity.6,10,11 In addition to SMN2 copy number, other factors have been proposed as SMA severity modifiers, although none can completely compensate for the SMN deficiency.11 SMN protein depletion leads to premature degeneration of motor neurons (anterior horn cells) in the spinal cord and the brain stem, leading to progressive loss of peripheral and central motor control, although the basis for the motor neuron–specific effects of the loss of a ubiquitously expressed SMN gene is not completely understood.4-6,10 However, the role of intracellular pathways, including the Rho-associated protein kinase (ROCK) and c-Jun N-terminal kinase (JNK) signaling pathways that are activated by low SMN levels, and their role in promoting neurodegeneration in SMA are becoming clearer.12 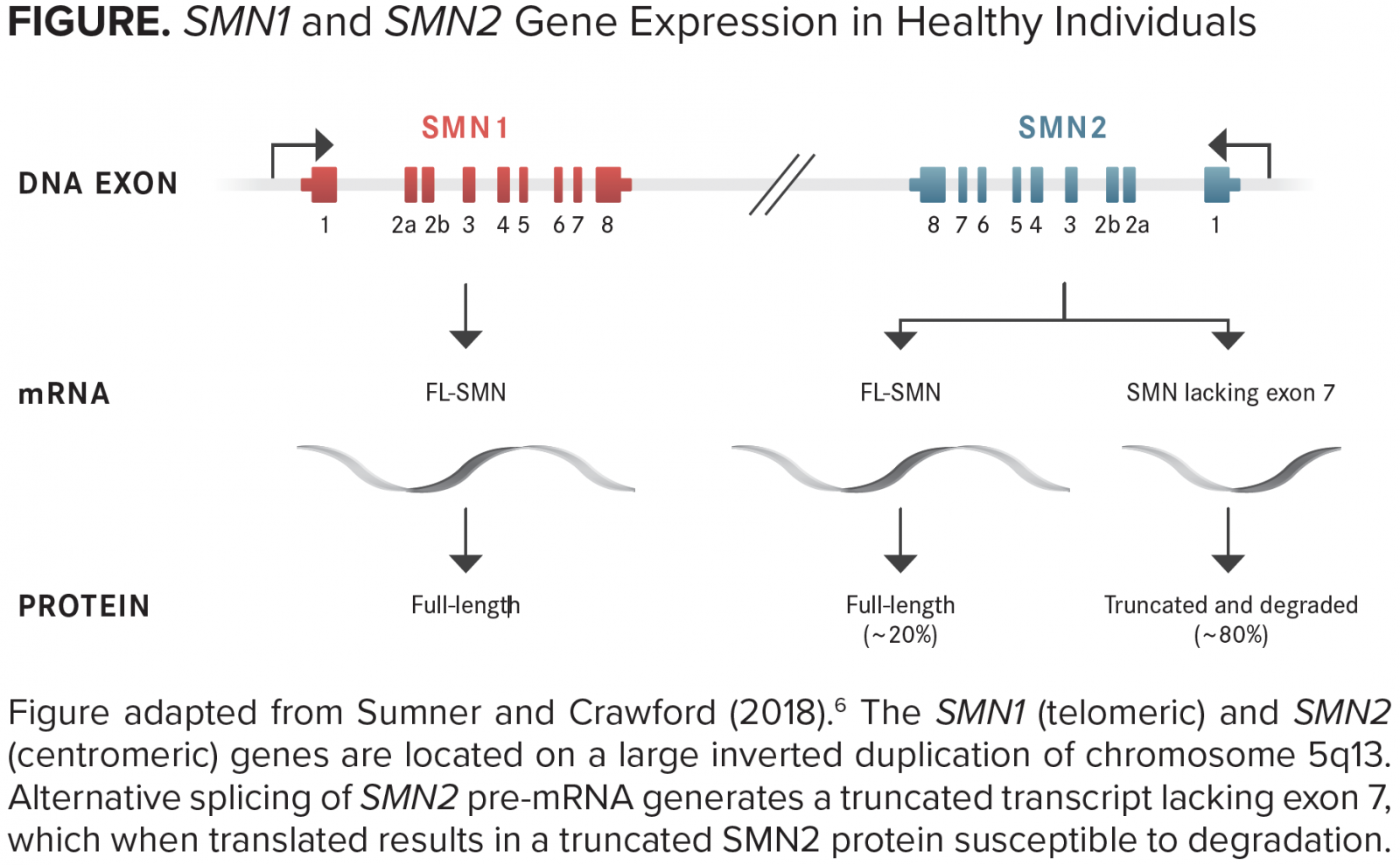 The SMN Pathway and Its Role in SMA

The SMN protein was first identified as part of a multiprotein complex thought to play a critical role in the cytoplasmic assembly of spliceosomal small nuclear ribonucleoproteins (snRNPs) and that is essential for pre-mRNA splicing in the nucleus.10 SMN is now recognized as a multifunctional protein essential for survival of all animal cells and involved in many cellular processes, including transcription, translation, molecular trafficking, and signal transduction.7,11 The levels of SMN protein are high in the spinal cord of healthy individuals, whereas they are much lower in patients with SMA.10 The expression of SMN depends on synaptic activation, and neuron-specific regulatory elements have been identified in the promoter/enhancer regions of the SMN genes. Complex combinatorial regulation by these elements is a major cause of the significantly higher SMN expression observed in neurons compared with fibroblasts.10

The human SMN protein contains 294 amino acids, organized into multiple domains, including N-terminal Gemin2- and nucleic acid–binding domains, a central Tudor domain, and C-terminal proline-rich and YG-box domains. The SMN complex, the functions of which include assembly of uridine-rich snRNP particles that are the building blocks of the splicing machinery, has 9 core members—SMN1, Gemins 2–8, and unrip—and localizes to a subnuclear compartment called gems (gemini of coiled bodies).11,13

SMN is required for snRNP assembly in vitro and in vivo, and the degree of SMN loss-driven reduction in snRNP assembly correlates with disease severity.8,13 Interestingly, snRNP assembly is impaired to a greater extent in neural tissues of SMA mouse models than in other tissues, such as the kidneys, suggesting a potential mechanism for the motor neuron hypersensitivity to SMN loss-mediated deficits in snRNP assembly.8 SMN has also been implicated in the formation of other cellular RNPs with coding and noncoding RNAs, some of which may be involved in the axonal transport and translation of mRNA at the distal axonal end of developing neurons.1 Altered snRNP production caused by chaperoning defects downstream of SMN depletion has been linked to the development of neuromuscular defects typical of SMA, suggesting that SMN functions as a primary driver underlying SMA pathogenesis.2 This model is supported by observations made in SMA mouse models: Disease severity correlates with the decrease in capacity for snRNP assembly in the spinal cord, and the disease phenotype could be rescued by reintroduction of an SMN allele capable of chaperoning snRNP assembly.2,14

SMN depletion also affects other processes, including actin dynamics, mitochondrial function, and endocytosis, that are important for maintaining neuronal homeostasis.15 Under pathologically low levels of SMN, the interaction of SMN with profilin is reduced, resulting in the increased formation of profilin–ROCK complexes, which activate RhoA, a negative regulator of axonal outgrowth.15 Inhibition of ROCK and RhoA restored neurite outgrowth under SMN-depleted conditions, indicating that the ROCK pathway may be a target for therapeutic intervention in SMA.12,15,16

Along these lines, pharmacologic inhibition of the RhoA/ ROCK pathway improved neuromuscular junction development and myofiber size, but not motor neuron loss, in mouse SMA models.1,17,18 Activation and increased activity of JNKs were identified using a screen for altered mitogen-activated protein kinase pathways that may contribute to neurodegeneration, using SMA and control spinal cord samples.11,12,19 The JNK pathway appears to mediate neurodegeneration in SMA; in particular, the neuron-specific JNK3 isoform mediated degeneration of SMN-deficient neurons, suggesting another potential non-SMN target in SMA therapy.19

SMN has also been implicated in ubiquitin homeostasis; in mouse models of severe SMA, expression of ubiquitin-like modifier activating enzyme 1 (Uba1) was significantly reduced in spinal cord and gastrocnemius muscle; additionally, ubiquitination pathways modulate SMN protein stability as well as axonal and synaptic stability.11,20-23 Moreover, experimental restoration of Uba1 levels rescues some SMA-associated phenotypes, such as correcting functional motor defects in a zebrafish model of SMA, suggesting that targeting ubiquitin-proteasomal degradation and associated pathways may warrant further assessment as a therapeutic intervention in SMA.24,25 The role of these modifier pathways in SMA, the extent of their interdependence, and their direct/indirect involvement in SMA pathogenesis have yet to be elucidated; given their potential in therapeutic intervention in SMA, further investigation into these molecular/cellular mechanisms of SMN deficiency–driven neuronal destabilization is warranted.12,15

ASOs are single-strand nucleic acids designed to hybridize to their target RNA sequence by Watson-Crick base pairing. In the case of SMA, ASOs work by binding pre-mRNAs and creating steric hindrance to protein binding or RNA secondary structure, targeting and inactivating a splicing silencer motif (called intronic splicing silencer N1) within intron 7 of SMN2 that binds hnRNP A1.1,6,26 SMN2 splice-modifying ASOs have proved highly effective in promoting exon 7 inclusion in SMN2 transcripts, thereby ensuring increased SMN protein levels, in addition to exhibiting long-term stability in the range of months in the central nervous system (CNS) with little to no toxicity.1,27

The first agent that gained FDA approval for all SMA types in children and adults was nusinersen (Spinraza; Biogen), an ASO that binds to SMN2 pre-mRNA downstream of exon 7, enhancing exon 7 incorporation into the mature mRNA.5,28,29 Clinical studies of nusinersen, all of which used an initial nusinersen loading period with intrathecal administration 4 times over 2 months and a subsequent maintenance period with nusinersen injections every 4 months, have established its role in SMA therapy, with evidence of efficacy without any major adverse events (AEs; summarized in Table 1).28 Nusinersen is delivered intrathecally, as ASOs do not penetrate the blood–brain barrier and must be delivered into the cerebrospinal fluid.5 The most common nusinersen-associated AEs were lower/upper respiratory tract infection and constipation, and the prescribing information for nusinersen lists thrombocytopenia and coagulation abnormalities as well as renal toxicity in the warnings and precautions.5,30 In addition to targeting SMN2 directly, ASOs that target the SMN2-repressing long noncoding RNA, which arises from the antisense strand of SMN and represses SMN expression, are being evaluated as potential clinically relevant agents, especially in combination with SMN splice-modifying ASOs.31,32 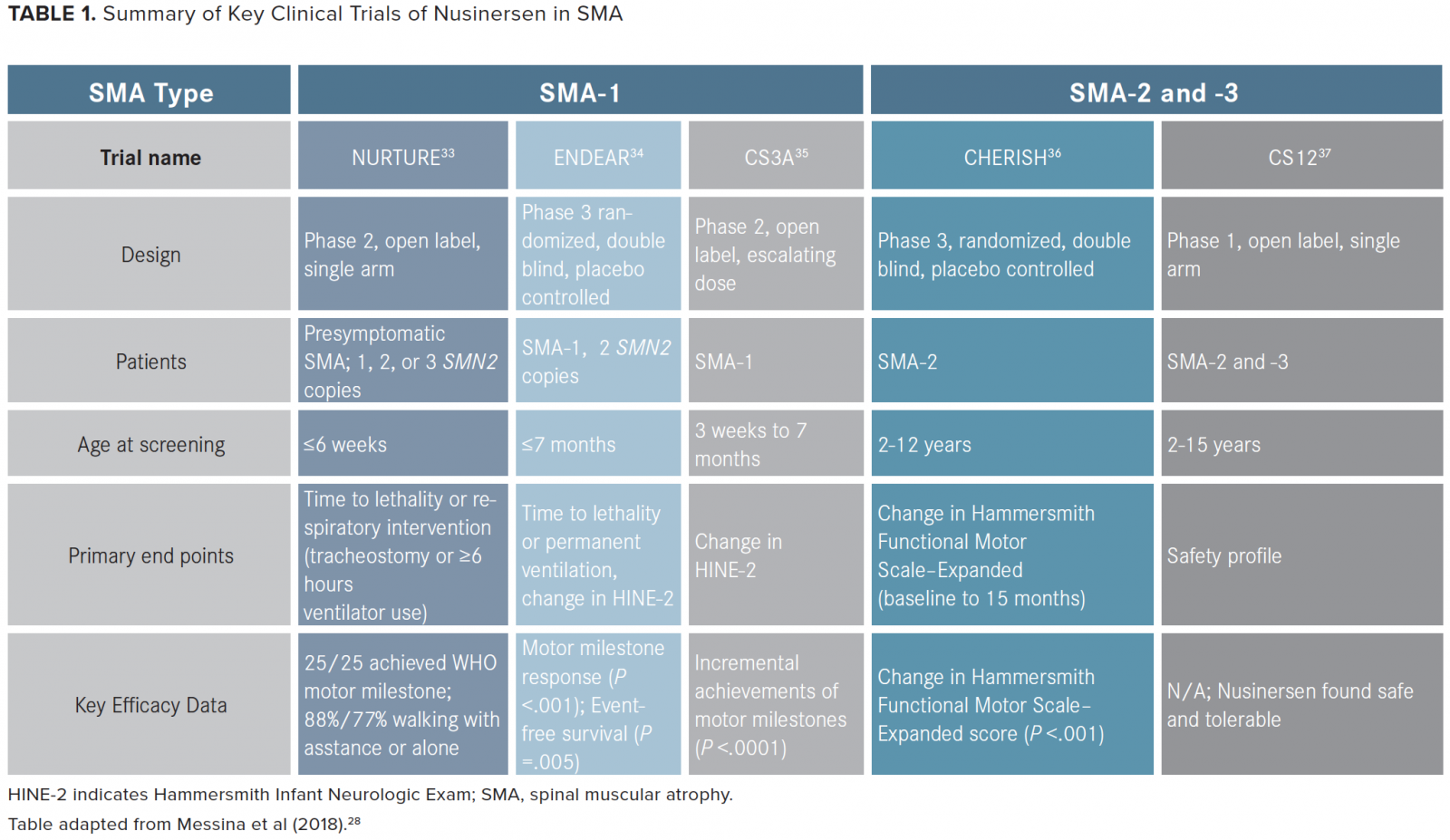 Gene therapy based on viral delivery of SMN has also gained traction in recent years in SMA therapy; indeed, the FDA approved onasemnogene abeparvovec-xioi (Zolgensma; AveXis), previously called AVXS-101, the first gene therapy approved to treat children <2 years with SMA, in May 2019.38 This gene therapy, based on a single intravenous infusion of an adeno-associated viral vector containing human SMN1 under control of the chicken β-actin promoter, resulted in longer survival, superior achievement of motor milestones, and better motor function of patients with SM There A-1, compared with historical cohorts.39,40 The vector delivers a functional copy of the human SMN1 gene into the target motor neuron cells, with a onetime intravenous administration ensuring expression of the SMN protein in the child’s motor neurons, providing a stable therapeutic option. Subsequent analyses showed that this gene therapy was associated with reduced pulmonary and nutritional support requirements, improved motor function, and decreased hospitalization rates, in contrast with the natural history of progressive respiratory failure and reduced survival in patients with SMA-1.40

In addition to the innovative approaches described above, more traditional pharmacologic, small molecule–based approaches to target SMN2 splicing and enhance SMN protein levels are in development in clinical and preclinical studies. Two splicing modulators currently in clinical trials are risdiplam (formerly RG7916/RG7800) and branaplam (LMI070), both of which promote inclusion of exon 7 in SMN2 mRNA (summarized in Table 2).6 Risdiplam is an orally administered, small‐molecule SMN2 pre‐mRNA splicing modifier that is distributed into the CNS and peripheral tissues and has been optimized in terms of pharmacokinetic (PK) characteristics and with enhanced specificity toward SMN2 exon 7 splicing relative to other SMN2 splicing modifiers.41,42 Branaplam is a highly potent, selective, and orally active pyridazine derivative.4

In addition to SMN-directed therapies, several agents capitalizing on SMN-independent strategies to address motor neuron degradation in SMA are being investigated in clinical trials.50 These include olesoxime, a cholesterol-like neuroprotective compound, and reldesemtiv (CK-2127107), a fast skeletal muscle troponin activator, along with RhoA/ROCK (fasudil and Y-27632) and β-catenin pathway (quercetin) inhibitors.15,50-52