The study uses a low-dose, extended-release formulation of the atypical antiepileptic levetiracetam, which has been shown to reduce hippocampal hyperactivity and improve memory performance.
By: Jenna Payesko
Published: September 02, 2019 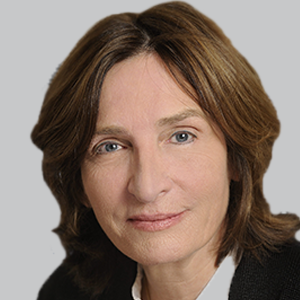 Michaela Gallagher, PhD
AGB101, a once-a-day, low-dose formulation of levetiracetam, is the first and only investigational therapeutic for mild cognitive impairment (MCI) due to Alzheimer disease targeting hippocampal hyperactivity in the pursuit to slow the symptoms associated with MCI and delay the onset of Alzheimer dementia.

The candidate is the subject of HOPE4MCI, a phase 3 global clinical trial (NCT03486938) assessing the safety and efficacy of AGB101 in approximately 830 patients aged 55 to 85 years.

AGB101 is a proprietary extended-release formulation of levetiracetam, an FDA-approved atypical antiepileptic, prescribed to patients at approximately one-twelfth of the dose commonly prescribed for those with epilepsy. Commercialized for 20 years, levetiracetam has a well-characterized safety profile.

“Our trial is basically selecting a patient population who have amnestic [mild cognitive impairment], and once they pass all other enrollment criteria, we screen them for a positive cut on an amyloid scan, and it’s scientifically known that within this population, there is the greatest amount of hippocampal overactivity in the brain,” Michaela Gallagher, PhD, the Krieger-Eisenhower Professor of Psychology and Neuroscience at Johns Hopkins University in Baltimore, Maryland, and founder of AgeneBio, told NeurologyLive™ in an interview.

Participants have a diagnosis of amnestic MCI, objective memory impairment in delayed recall, and a positive amyloid positron emission tomography (PET) scan. Participants will be randomly assigned to either oral AGB101 220 mg or placebo once daily for 78 weeks (FIGURE).

The primary outcome measure is change in the Clinical Dementia Rating Scale sum of boxes at 78 weeks; secondary measures include change in the Mini-Mental State Examination score and the Functional Activities Questionnaire (FAQ) score, both at 78 weeks.

The HOPE4MCI trial also includes a substudy of specialized imaging to track Alzheimer disease–related brain pathology throughout the trial. Secondary imaging end points include measures of neurodegeneration via functional magnetic resonance imaging (fMRI) and tau PET MK-6240. The substudy will include 160 participants of the 830 who will follow the full phase 3 protocol with the addition of tau PET imaging at baseline and the end of the trial to assess the location, magnitude, and spread of tau as a possible brain biomarker for therapeutic results. 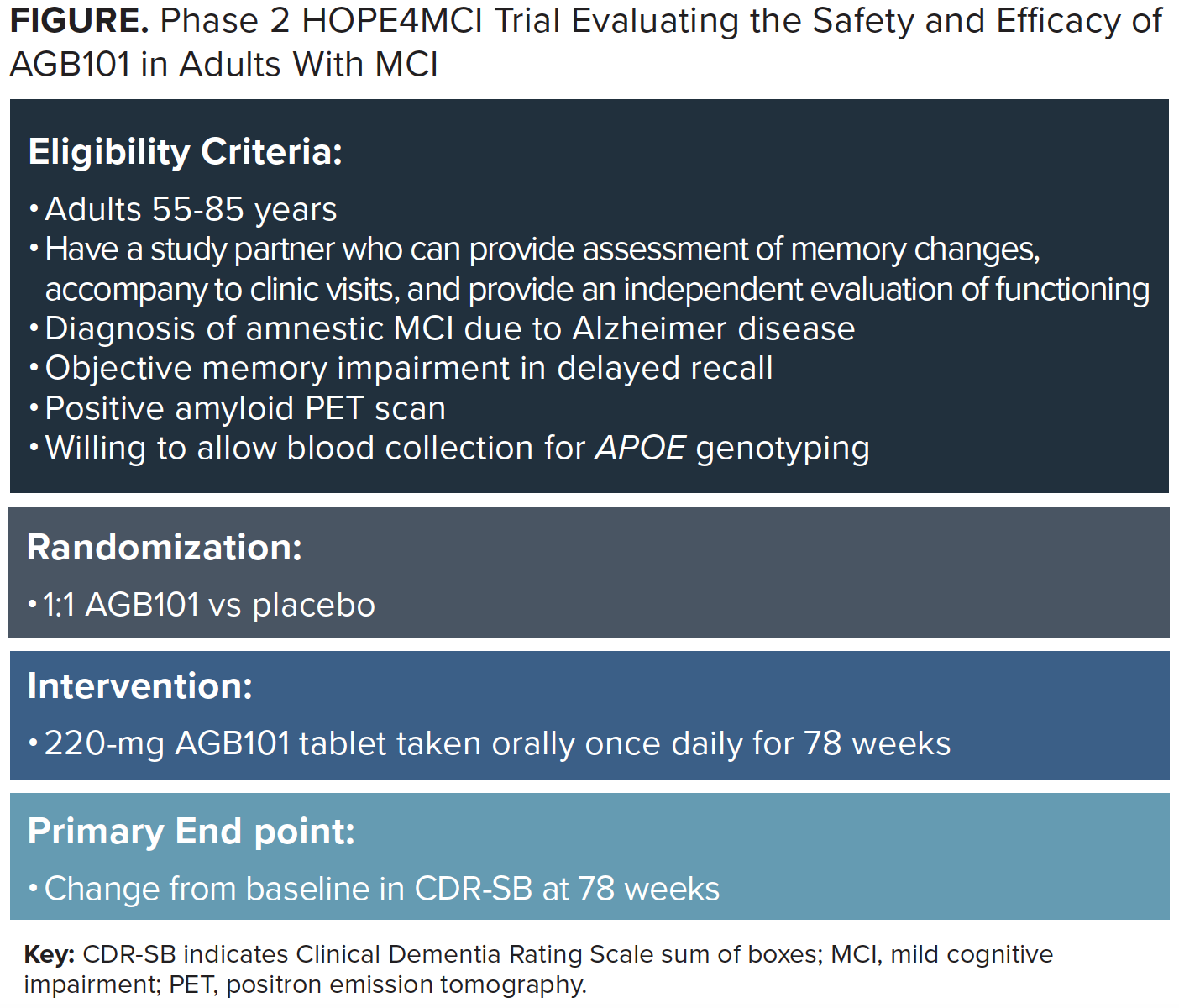 “This treatment has been shown to normalize the overactivity in the brain and the localization that overactivity is now thought through basic science research to be driving the pathology in Alzheimer disease. So we’re not targeting amyloid, we’re not targeting tau, but there’s good evidence that overactivity in the brain drives the deposition of amyloid,” Gallagher explained. “I think maybe these days, more importantly, it also drives the spread of tau from where it is originally situated in a very confined localization affecting the memory system through larger networks and connected neural pathways.”

An earlier phase 2 trial (NCT01044758) assessed the effects of AGB101 on memory performance in the scanning task and fMRI signals in patients with amnestic MCI. The randomized, double-blind study with subject crossover included 69 patients—54 with amnestic MCI and 17 controls—and employed fMRI blood oxygen level–dependent imaging activation to detect effects of AGB101 across a range of doses—62.5 mg, 125.0 mg, and 250.0 mg—on brain function together with memory performance. All participants completed the same study procedures with fMRI visits after each of the 2 treatment phases, separated by a washout period of 4 weeks. Controls were given placebo during both treatment phases, whereas the intention-to-treat patients were given placebo during one treatment phase and AGB101 during the other. Results showed that AGB101 125 mg or 250 mg daily reduced excess hippocampal activity to a normal range, restored brain network function, and improved memory performance in the intention-to-treat population.1

“Levetiracetam is an ideal drug because you can actually compare pharmacokinetics exposure across species, so the doses that you’re giving translate beautifully across the preclinical work and the clinical work, and the dose that we’re using is really in the sweet spot,” Gallagher explained. “The range we tested that showed some efficacy is 220 mg but in an extended-release tablet, so we maintain pharmacokinetics exposure really beautifully from breakfast to bedtime.”