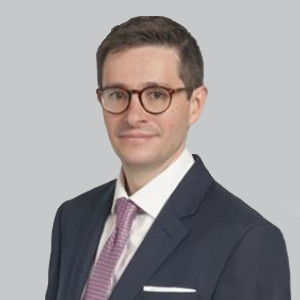 Daniel Ontaneda, MD
Like most medications, disease-modifying therapies (DMTs) for multiple sclerosis (MS) carry a risk for adverse effects (AEs), most of which are mild to moderate but can still impact a patient’s day-to-day well-being. In MS, some of the most effective therapies are associated with some of the most serious AEs, so being prepared to treat these complications and effectively communicating the risk of them to patients are necessary steps in therapy selection.

“The way our immunosuppressive medications work is by bringing down the immune system, and as a result, these medications carry a risk with them, mainly of infections,” Daniel Ontaneda, MD, a clinical neurologist at Cleveland Clinic’s Mellen Center for Multiple Sclerosis in Ohio, told NeurologyLiveTM. “What gets highlighted the most are the most severe types of infections,” he explained. “PML [progressive multifocal leukoen-cephalopathy] and other brain infections with herpes virus, such as herpes encephalitis and varicella-zoster virus [VZV] encephalitis, are things that worry us.”

PML is the most serious infection associated with immuno- logic therapies in MS. Often, underlying systemic infections may also be present, and patients may experience a worsening of infections that normally could be managed quite easily, such as urinary tract infections or pneumonia. Ontaneda also listed concerns over risks for atypical infections, such as listeria, which rarely occurs with alemtuzumab use, and tuberculosis, which is associated with some oral and infusion therapies. Reactivation of viral infections, including hepatitis, can also present serious problems, he said.

The potentially life-threatening AEs from MS are not the only ones that concern patients and providers. “We tend to worry a lot about rare but serious adverse effects, such as PML or idiopathic thrombocytopenic purpura,” Ruth Ann Marrie, MD, PhD, director of the Multiple Sclerosis Clinic at the Max Rady College of Medicine, Health Sciences Centre at the University of Manitoba, in Winnipeg, Canada, told NeurologyLiveTM. “However, less serious but common adverse effects may be bothersome to patients, such as flu-like [adverse] effects seen with interferon beta, facial flushing experienced with dimethyl fumarate, gastrointestinal upset with dimethyl fumarate and teriflunomide, lipoatrophy seen in glatiramer acetate, and infusion reactions seen with ocrelizumab and alemtuzumab,” she explained.

Newer therapies for MS, although highly effective in reducing the risk of relapse, have all been associated with risk for PML and other life-threatening infections, as well as other serious AEs.

The mechanism of action of dimethyl fumarate has not been clar- ified; however, this oral medication is known to raise lymphocyte counts in some patients, which was associated with a slightly higher risk of infections compared with placebo.4 As of 2017, 5 cases of treatment-associated PML have been reported.4

Natalizumab carries the most significant risk of PML infection, which generally occurs hours after infusion. “There’s over 800-some cases now of PML associated with the use of natalizumab, [so] we’re using less of it in part because of that, and that helps us avoid the complications. We do have other potent drugs, and we have seen a few cases, but nothing that’s on the scale we’ve seen with natalizumab,” Eric Willamson, MD, director of the West Los Angeles Veterans Administration Hospital’s Multiple Sclerosis Center, told NeurologyLiveTM.

Although some studies have focused on the risk of PML over 24 doses,5 Williamson emphasized that the risk does not actually change over time. “It is not markedly different at 18 months versus 20 or 24 versus 28 or 30. There is nothing magic about taking a 24th dose,” he said.

“Alemtuzumab in MS is not particularly associated with PML, which is kind of fascinating. We’re wondering if that has to do with the mechanism of action,” Williamson noted. Still, the CD52 monoclonal antibody causes a drop in T and B lymphocytes that is associated with risk of infections such as immune-mediated thrombocytopenia and thyroiditis, although a gradual recovery in lymphocyte counts is usually seen about 1 month post administration.6,7 Thirteen cases of hemorrhagic stroke or arterial dissection following infusion have also been reported, leading to the issuance of a black box warning by the FDA in November 2018.8 Other serious, and sometimes fatal, AEs have also been reported, including listeriosis, neutropenia with Staphylococcus infection, autoimmune hemolytic anemia with necrotizing leukoencephalopathy, and hemophagocytic lymphohistiocytosis.6 In 2017, a report from investigators in Belgium identified a small but significant risk (0.3%) of potentially life-threatening adverse renal events occur- ring as long as 39 months after cessation of the drug.7

Addressing PML and Its Complications

In 2013, the American Academy of Neurology Neuroinfectious Disease Section published a consensus statement on PML diagnostic criteria, including an algorithm to help guide clinicians through a definitive diagnosis of PML (FIGURE).9 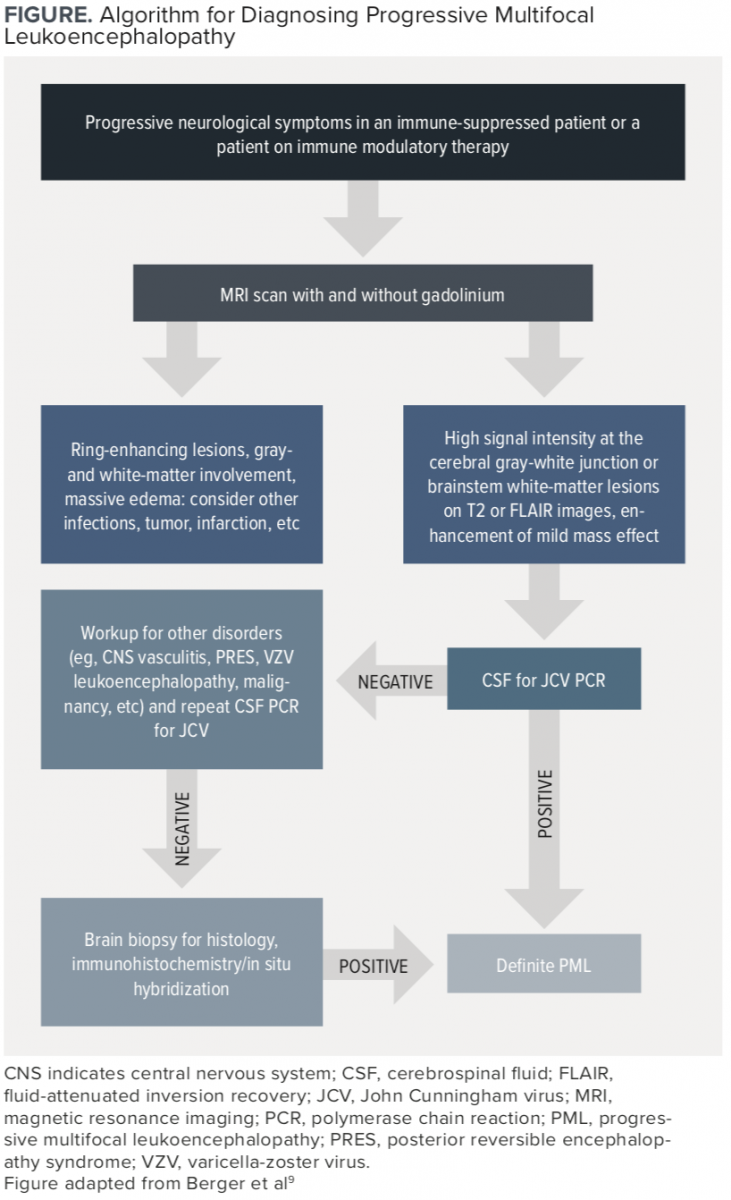 “Even when [PML is] detected before the patient has clinical symptoms, we know what is going to happen, and we struggle to prevent it. The best case is that the body’s immune system can be restored and fight off the infection, but that invariably comes with IRIS [immune reconstitution inflammatory syndrome], which can cause damage to the brain and the resulting disability, just like PML can,” he said, referring to PML IRIS, an inflammatory reaction to PML pathology in the brain that can last a year or more. “If we find things early, we don’t have the mortality in the numbers that [you see] in other diseases like HIV,” he reported.

Management of PML complicates MS disease management because it necessitates discontinuation of the most effective MS therapies. “Almost without exception, people are off of immune ther-apies at that point,” Williams said. “So anything that could be asso- ciated with risk of PML, which is a lot of the therapies for MS, you would not be using in this setting.” Using natalizumab again in an affected patient would probably be contraindicated, he said, noting that other drugs like fingolimod and dimethyl fumarate might have similar concerns and can carry risks of other complications.

PML IRIS also requires aggressive management. “We can dampen the immune response often by using things like steroids, but it’s very tricky because steroids suppress the immune response that we need to fight off the virus. So, it’s a balancing act between letting the body get rid of the JC [John Cunningham] virus, [a human poly- omavirus], and PML and dampening too much immune response to cause more inflammation of the virus,” Williamson said.

Impact on Quality of Life and Outcomes

The range of complications associated with DMTs produce highly variable effects on outcomes. PML concerns clinicians the most, because patients are left with significant residual disability, but many other infections associated with DMTs can be more successfully managed. According to Ontaneda, “If a patient has a urinary tract infection that develops into sepsis and ends up in the hospital being treated with antibiotics, for the most part, those patients make a pretty good recovery. It takes a little while, but generally, they bounce back,” he said.

Whether or not complications lead to changes in therapy is a decision that is made case-by-case, Ontaneda explained. “When we see patients in follow-up, we ask them, ‘Have you had any infectious complications?’ And if they have, we try to gauge the severity of what that complication looked like. If, for example, a patient tells me that they [used to] get 1 or 2 colds and now they get 3, that probably won’t change the risk-benefit of the DMT. If a patient tells me they’ve been hospitalized twice in the past year since starting the medication, and they were in the ICU and had to be intubated for a few days, then certainly that’s something that worries me more, and I would consider alternative therapy.”

“I think we are evolving in how we screen for this and how we try to avoid it. We’re probably using less natalizumab because now we have other efficacious drugs that don’t carry as much risk,” Williamson said, noting that a lot of patients who used to take natalizumab now take ocrelizumab.

Not all symptoms lead to modification of the therapeutic strategy. “The first step is to explore the symptoms so that we can determine if it is really related to the disease-modifying therapy or not,” Marrie said. For some AEs, there are strategies that can be adopted to mitigate them, such as aspirin for facial flushing, taking certain medications with food or before bedtime, and using nonsteroidal anti-inflammatory drugs or acetaminophen to combat flu-like effects. Only if the AEs cannot be successfully mitigated and are intolerable would another therapy be considered, she added.

Barbara Bishop, NP, a certified MS specialist from Virginia, said that changes to therapy are more likely to be due to patient annoyance with less severe side effects rather than overconcern for safety from major AEs. “For example, a female may want to change therapy due to local injection-site reactions, especially if the patient is young and is often in shorts or bathing suits, or a patient might want to change therapy due to paresthesia symptoms, [which may self-resolve in time], but is unwilling to wait because it interferes with lifestyle.”

At the other end of the scale are patients who are very risk averse, Ontaneda said. “So even a low likelihood of a potentially serious complication is something they take very seriously and weighs into their decision-making process versus other people who are more interested in making sure their disease is under control and they understand there are risks they will encounter.”

Not surprisingly, AEs often result in patient nonadherence and discontinuation from MS therapy and have been reported at rates up to 50%.10 Marrie achieves significantly higher rates of adherence to therapies, above 75%, due to careful counseling and consideration of patient goals and underlying concerns. “Patients must buy into what they are doing and why,” she said.

Ontaneda takes a similar approach. “I try to put the risks of DMTs into perspective with other events,” he said, noting that serious AEs to DMTs are actually very-low-frequency events. “When we read about these medications, they tend to be a little scary, and patients tend to focus on, ‘Well, I could be that 1 person who gets that infection,’ but the reality is that we take probably greater risks by getting into our car every day and driving to work. But it’s something we do because it’s something we have to do.”

Bishop said, “Many times patients are on DMTs for life, and their disease is well controlled and there are no AEs. Picking the right therapy for the patient based on the AE profile, but also taking into consideration the patient’s comorbid conditions, will help reduce potential side effects. But most importantly, treatment options stratified to disease severity and prognostic characteristics will help reduce AEs over time.”