Robert Zivadinov, MD, PhD, professor of neurology and director of the Buffalo Neuroimaging Analysis Center, discussed the post-hoc analysis of the ORATORIO trial he and colleagues conducted. 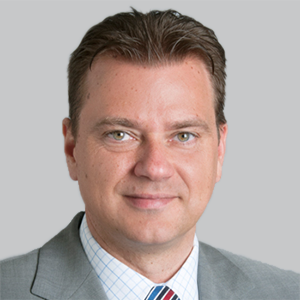 Zivadinov and colleagues evaluated data from 732 patients with PPMS who were randomly assigned to ocrelizumab (n = 488) or placebo (n = 244) as part of a post-hoc analysis of the ORATORIO trial (NCT01194570). They confirmed that accumulation of aT2-LV in patients receiving placebo (366.1mm3 in 120 weeks) was consistent with previous reports in PPMS and thus further validated the biomarker’s accuracy. They found that patients treated with ocrelizumab had significantly slower accumulation of aT2-LV (319.4mm3; P = .013). Including scanner model, software, protocol changes, and additional covariates further confirmed these results (P = .029).

NeurologyLive spoke with Zivadinov to learn more about the development of the aT2-LV biomarker in progressive disease. He also discussed needs in the progressive MS space and the post-hoc analysis for which he served as investigator.

NeurologyLive: What are some of the needs in the PPMS space?

Robert Zivadinov, MD, PhD: Ocrelizumab is the only treatment approved for PPMS. But we are really lacking biomarkers in this type of disease because the patients, beyond having an advanced disability, have very little or none of the inflammatory part of the disease. The usual winners in clinical trials with anti-inflammatory treatments like contrast enhancing lesions or T2 new and enlarging lesions are not as important because the patient will not develop many of them. Mostly, the type of immunity has changed in this type of disease, and we need to find biomarkers that are more reflective of disease progression, especially in PPMS.

How was aT2-LV developed as a biomarker in PPMS?

A couple of years ago, we embarked on the invention of a new biomarker in MS. Instead of looking for the lesions that are new or enlarging in MS, we look at the lesions that are disappearing or shrinking into the cerebral spinal fluid (CSF). We coined that biomarker aT2-LV. As several different cohorts begin to look at this biomarker, we observed a couple of interesting things. The number of lesions being subsumed into the CSF in very early phases of the disease, like clinically isolated syndrome or early relapsing remitting MS, was not very different from healthy controls. However, as the patients’ MS progressed and with longer disease duration, we saw more and more of the lesions disappearing into the CSF. So that was extremely interesting for us, while we were developing that biomarker for PPMS and secondary progressive MS.

In 2 studies, we looked at long-term effects up to 10 years and found that the number of lesions that were disappearing is pretty constant but increasing toward the progressive stages. It's also an early predictor of the long-term outcomes. In 1 study, we found that in the first 6 months, the number of lesions that were disappearing were predictive of who would have disability 10 years later. So, going back to ocrelizumab, it was a perfect setting of a drug that has been used for the first time and approved in PPMS. I was not originally an investigator of the ORATORIO study, but I'm now investigating this blind, post-hoc analysis in which we wanted to prove this hypothesis we had.