Men and women smoke for different reasons and activate different parts of the brain while smoking. These findings from “dopamine movies” could have implications for Parkinson disease. 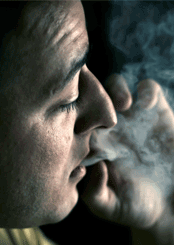 Men and women activate different parts of the brain while smoking.

To arrive at these findings-which could have implications beyond smoking research-the Yale group first had to design a new image analysis technique that would allow them to capture the brief effects of smoking on the brain’s dopamine system. This technological innovation (creating “dopamine movies” from 90 minutes of dynamic positron emission tomography [PET] data) was accomplished through the invention and deployment of an analysis method that removes some aspects of the PET image and leaves behind just the effects of dopamine. On reviewing the movies of men and women, the scientists found that the location and timing of dopamine responses to smoking cigarettes differed between the sexes.

The research conducted by the Yale team was funded by the National Institute on Drug Abuse (NIDA) and the NIH Office of Research on Women’s Health. “Our initial intent was to confirm that we could reproducibly detect brief dopamine changes in the brain,” said Evan D. Morris, PhD, the senior author. “Only after we looked at a number of dopamine movies did we start to recognize that there were consistent sex differences.”

NIDA has prioritized research on sex differences for some time. According to the NIDA Web site, “In 1995, NIDA formally established the Women and Sex/Gender Differences Research Program with the objective of achieving a comprehensive understanding of addiction and optimally effective prevention and treatment interventions for both men and women.”2

Historically, men have dominated the ranks of research subjects, resulting in medications that worked in men. In fact, the nicotine patch is known to work better for male smokers trying to quit than for female smokers.3

How the Experiments Were Performed

The PET scans in this study began with the injection of a microdose of the radioactive tracer 11C-raclopride, a dopamine (D2) receptor antagonist labeled with carbon-11. The PET scanner detects the emission of radioactivity coming from 11C-raclopride in the brain.

Eight men and 8 women who were matched for their nicotine dependence level participated. Each smoked his/her own brand of cigarettes in the scanner, at his/her own pace. Subjects began smoking somewhere between 35 and 45 minutes into the scan session. PET images of the brain were acquired in blocks of 3 minutes for the duration of the 90-minute scan session. The resulting PET images represent the uptake by the brain and retention by the dopamine receptors of radioactive raclopride.

The innovative image analysis introduced by Dr Morris and his colleagues takes the dynamic PET images of radioactivity distribution and converts them into images of dopamine over time. Such a conversion relies on the use of a mathematical model that describes both the behavior of the radiotracer and the endogenous dopamine that competes with it for access to dopamine receptors.

Dr Morris offers this analogy for how the process works: “Imagine that the PET image of each 3-minute block of time is composed of a red, green, and blue layer, like the images from your digital camera. Our mathematical model strips away the red and blue so that all you’re left with is the green. In our case, the ‘green’ is the dopamine.” The sequence of dopamine images over time constitutes a dopamine movie.

The primary finding was that men activated dopamine in the right ventral striatum but women did not. The researchers also found that the speed of the responses to cigarette smoking, regionally, was different between men and women. When women smoked, dopamine elevation was faster than in men in a discrete area of the right dorsal putamen.

The present findings of sex differences in brain response may help explain sex differences in smoking behavior. In this study, the women were not less dependent on nicotine than the men. Rather, they may simply smoke for different reasons and the neurochemistry revealed by the PET supports it.

Men are known to smoke for the reinforcing drug effect of nicotine. This is consistent with the right ventral striatal activation in the male subjects. The ventral striatum is known to be important in drug reinforcement.

Women report that they smoke out of “habit” and for stress relief. This is consistent with the finding of a locus of fast dopamine activation in the right dorsal striatum of women. The dorsal striatum has been implicated in habit formation.

Nicotine replacement therapy is preferentially effective for smoking cessation in men. Other medications that rely on alleviating other addictive aspects of smoking behavior, and hence other aspects of the brain response, may work better in women smokers.

“We hope that this work will prompt pharmaceutical companies to develop methods of treatment geared toward women,” said Kelly Cosgrove, PhD, Associate Professor of Psychiatry, Diagnostic Radiology, and Neurobiology, and the study’s lead author. “We hypothesize that successful treatments for women smokers would attenuate the dopamine response in the dorsal striatum or perhaps alter its timing to reduce the appeal of smoking. Dopamine movies could be a valuable screening tool in developing medications that alter patterns of dopamine release.”

How can dopamine movies be helpful in the understanding and treatment of other disorders? Consider Parkinson disease (PD). Levodopa-induced dyskinesias (LID) are a devastating adverse effect of treatment for many patients who have PD and their families. LID is the major untreated problem of late-stage PD, but it is unpredictable. Some experts think that dyskinesias develop because patients are making dopamine from levodopa too rapidly.4 They are unable to sustain a therapeutic level of dopamine. By using the dopamine movie technology in conjunction with doses of levodopa, Morris, Cosgrove, and colleagues think they may be able to predict in which patients LID is more likely to occur.

In addition, an addiction to gambling develops in some fraction of patients with PD as a consequence of treatment with dopamine agonists; other patients become addicted to their medications.5 As with smokers and cigarettes, the addictions of afflicted patients with PD are probably encoded in their particular patterns of dopamine response to medications. Dr Morris explains, “Dopamine movies could be useful in screening patients or new treatments to assess their addiction liabilities.”