Data from the EXPAND trial show that after 12 months of treatment, changes on retinal nerve fiber layer thickness favored those on siponimod rather than the placebo group. 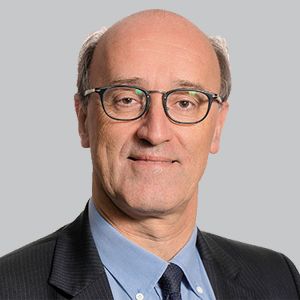 Presented by lead author Patrick Vermersch, MD, PhD, vice-dean, faculty of medicine, Lille University, the data included a subgroup of 159 patients with SPMS from the core phase of the phase 3 EXPAND clinical trial (NCT01665144). To assess the impact of siponimod vs placebo on retinal thinning, OCT was used to evaluate changes in retinal nerve fiber layer (RNFL) and combined ganglion cell and inner plexiform layers (GCIPL).

Patients in the siponimod group (n = 104) had mean baseline RNFL thickness lower than those on placebo (n = 55). After 12 months of treatment, RNFL thickness numerically favored the siponimod group over placebo (0.39 vs –0.99, respectively; difference, 1.37; P = .099). These results did not hold true at the 24-month mark; however, investigators noted that there were fewer assessments available for RNFL at that time (number of eyes: siponimod, 40; placebo, 12) compared with the 12-month period (number of eyes: siponimod, 64; placebo, 40).

Siponimod, a selective sphingosine 1-phosphate receptor modulator, received FDA approval for the treatment of SPMS in March 2019. The approval was granted based on data from the EXPAND trial (NCT01665144), the largest phase 3 assessment of its kind, including more than 1600 patients with SPMS. It ultimately showed that 3-month confirmed disability progression was reduced by 21% (P = .013).2

The EXPAND trial additionally showed a 33% reduction in confirmed disability progression compared with placebo in patients with relapse activity in the 24 months prior to screening (P = .0100). As well, data revealed that the risk of 6-month confirmed disability progression was reduced by 26% compared with placebo (P = .0058) and that the annualized relapse rate was reduced by 55% with siponimod.

Robert Fox, MD, neurologist, Mellen Center for Multiple Sclerosis, and Vice-Chair for Research, Neurological Institute, Cleveland Clinic, was also an investigator on the EXPAND trial. He sat down as part of a NeurologyLive Peer Exchange panel to discuss the rationale for using siponimod in SPMS and the practical implications the trial had on the field. Watch his commentary below.