Tools to Offer TLC for Hatred of Sound

There is no approved screening tool for misophonia, but a case review can lead to a diagnosis. Several treatment options may aid in symptom management. 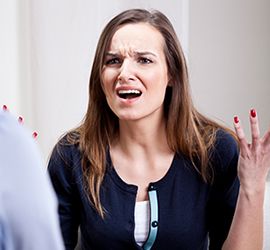 Anger is a common symptom of misophonia, or hatred of sound.

L.C., who is 28 years old, noticed symptoms of misophonia at age 8 years while sitting at the dinner table with her parents. The sound of her parents chewing and swallowing was torturous for her. As L.C. grew older, her symptoms became more prominent. Soon, classmates also became sources of triggers. The sound of schoolmates chewing gum or breathing too loudly caused intense feelings of distress. Throughout her past, L.C. had been labeled “sensitive,” “touchy,” and “easily irritated.” She had never met or heard of anyone who had such symptoms, and she wrote them off as being unique to herself. In 2012, however, a TV celebrity came out with a confession of having misophonia and explained what living with the disorder had been like for her. Once seeing the celebrity present with the exact same symptoms, L.C. began to do research for herself. She discovered a list of misophonia providers and sought guidance from Dr. Margaret Jastreboff, a neuroscientist and misophonia expert.

Although currently there is no approved screening tool for misophonia, a case review can aid a provider in making a diagnosis. A review may include onset of symptoms, triggers, reactions to triggers, and coping strategies.

Questions to ask a potential patient include the following2:

1. Are you triggered by sounds made by other people?

2. Do your trigger sounds arouse a negative physical reaction?

3. Do you avoid situations where you know you will be exposed to triggers?

4. Are your symptoms unrelated to any other condition?

Common reactions to triggers include verbally confronting the offender, remaining in the situation and feeling distressed, escaping, putting in ear plugs, mimicking the offender, and using white noise. Feeling ashamed of one’s symptoms is not uncommon.

The auditory and limbic systems and the autonomic nervous system (ANS) are responsible for the misophonic response.3 Misophonia engages the limbic system in a powerful negative way, and over time a conditioned reflex is established. The reflex is the negative reaction to a trigger. Soon, every time the patient hears the trigger, he or she will have a negative emotional response.

Misophonia treatment is directed at decreasing the enhanced connection between the limbic system and the ANS and removing the conditioned reflex. Based on a protocol designed by Pawel and Margaret Jastreboff, the conditioned reflex can be removed by linking the trigger with something positive.4 For example, the protocol may be performed with music. The patient is exposed to the trigger and to music of his or her preference. Over the course of months, the pleasure sound is decreased. The music should never mask the sound of the trigger. In data collected by the Jastreboffs, 152 of 184 patients who underwent this protocol showed improvement.4

In-ear white noise sound generators are another therapy. The idea behind these generators is to produce a gateway theory effect. The volume of the stimulus does not change, but with the added positive stimulus of a white noise, the outside annoyance appears to lessen.

External white noise generators also can be helpful. Using these devices can decrease the responses of the limbic system and the ANS by weakening the perception and reaction to the trigger.4

Currently no drugs are approved for treatment.

A misophonia toolkit may include the following actions and resources:

• A patient should carry foods that simulate a negative response when they are being eaten by others (eg, apples, chips).

• Mimicry can be used to decrease the perception of an external stimulus.

• White noise machines can be brought into an office space or classroom to facilitate the use of a misophonia protocol.1

• Patients can draft a letter to friends and family describing what misophonia is, how it affects their life, triggers, symptoms, and how those around the patient can be supportive.

In misophonia, a person is triggered to distress by everyday noises made by others. The disorder affects an estimated 3% of the general population.4 Although currently there is no cure, several treatment options may aid in symptom management. Power is in the knowledge of management techniques and available resources to help patients live a more normal life.