A Critical Evaluation of Disease-Modifying Strategies in Parkinson Disease

A trio of clinicians from Georgetown University explore the current status of disease-modifying therapies for individuals with Parkinson disease. 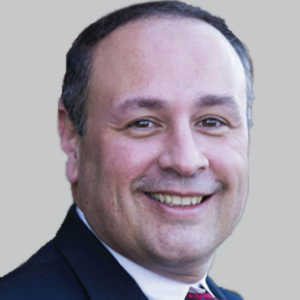 A NUMBER OF DISEASE-MODIFYING THERAPIES have been investigated in Parkinson disease (PD), and they all encountered a common roadblock: overcoming the efficacy of levodopa. Major obstacles are evident in the inability to translate preclinical data into therapies and in the failure to identify reliable biomarkers. Novel approaches like immunotherapies, gene therapies, and tyrosine kinase inhibition provide alternate methods for the development of disease modification in PD.

The Valley of Death: From Preclinical Mechanisms to Clinical Effect

Previous PD research efforts focused on motor function and symptoms, although PD includes complexities beyond these. The Neuroprotective Exploratory Trials in PD (NET-PD) program intended to accelerate therapeutic evaluation in PD trials.1 Preclinical animal data provided strong justification for clinical investigation into more than 80 compounds.2,3 The incentives for initiation of NET-PD were the relatively good drug safety profiles. These drugs were studied in concurrent clinical trials, but ultimately, they led to collective failure. Several shortcomings have since been noted that strongly dispute the supposed rigor of NET-PD studies, including lack of biomarkers that could be reliably measured in animals and the noninclusion of patients with PD to prove target engagement and drug effects. Pharmacological diligence and drug dose selection were absent—most NET-PD studies tested a single-dose level—suggesting that potential clinical or biomarker effects were missed. Some studies progressed to phase 3, such as SURE-PD3 and STEADY-PD III,4,5 but these late-stage studies showed no effect on the primary motor outcome.

Collectively, these studies were predominantly early-stage, lacked a specific biomarker, did not employ satisfactory dose selection strategies, and, overall, focused on motor outcomes over a short period of time (<12 months) in levodopa-treated PD patients. The accelerated NET-PD studies were a “rushed effort” that omitted adequate pharmacological scrutiny and aimed to show the efficacy of neuroprotective agents on motor symptoms compared with levodopa.

The Conundrum: Biomarkers and Clinical Effects 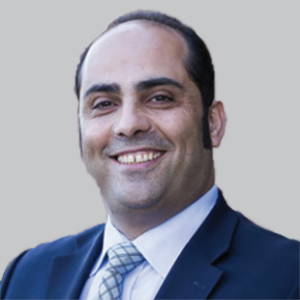 PD involves motor and nonmotor symptoms, loss of dopaminergic neurons, and accumulation of misfolded alpha-synuclein (αS) oligomers.6-8 Research in PD is lagging that of other neurodegenerative diseases, like Alzheimer disease (AD), owing to the availability in those other diseases of dopaminergic and other symptomatic therapies. In idiopathic PD, a biomarker system to evaluate investigational disease-modifying drug effects is absent. Conversely, in AD, novel drug candidates rely on the amyloid/tau/ neurodegeneration system that may collectively represent pathological changes in the AD brain.9

PD is a progressive, multisymptomatic disease that requires increasingly more medications as the disease worsens. The primary limitation in phase 2 and 3 PD trials is emphasis on a short-term motor outcome in patients who are already medicated. Another common limitation of disease modification in PD trials is lack of treatment-specific target engagement and related biomarkers. PD treatment is unlikely to be similar to that of, say, hypertension (eg, a readout of the mean arterial pressure indicates immediate drug response), but an effective PD treatment would create a prolonged biological process that should halt or reverse neuropathology. Therefore, both earlier intervention in biomarker-confirmed PD and longer treatment in drug-naïve patients are needed to demonstrate motor and nonmotor benefit. Alternatively, medically optimized patients must be treated significantly longer compared with predicted placebo and/or standard of care (eg, levodopa, dopamine agents, etc) to observe the effects of long-term therapies that modify multiple pathologies integral to the “brain motor system,” including dopamine loss, oligomeric αS, and hyperphosphorylated tau (p-tau). As in AD, measurement of these biomarkers together as a “mix” may help to evaluate the efficacy of disease-modifying drugs.

The diagnostic error at the onset of motor symptoms is often significant; PD can be confused with other alpha-synucleinopathies such as Lewy body dementia (LBD) and primary tauopathies. Studying motor symptoms without biomarker confirmation is detrimental to clinical trials that exclusively focus on motor effects. The limitations of motor assessments and of scales like the Unified Parkinson’s Disease Rating Scale (UPDRS) must be recognized.10 For instance, the UPDRS should be performed together with developing technologies like wearable devices that could provide objective measures.

In addition to motor assessment, biomarkers should be used as measures of underlying biology for subtyping.11 For example, targeting leucine-rich repeat kinase 2–associated PD12 and glucocerebrosidase (GBA)-associated PD13 are efforts in the right direction within genetically defined conditions. αS gene duplication, multiplication, and mutations are causal genetic factors in familial PD.14 The cerebrospinal fluid (CSF) levels of αS oligomers increase in PD, while total αS decreases, compared with age-matched controls.15-17 These data provide an important distinction between normal, natively unfolded αS (referred to as total levels), which has an essential housekeeping function, and misfolded oligomers, which may form toxic fibrils and induce Lewy body pathology. The toxicity of αS is due to the transitional oligomers that are the building blocks of fibrils,18 and these transitional oligomers are measurable in the CSF of those with PD. Furthermore, p-tau leads to motor and nonmotor symptoms that may overlap with those of PD, and p-tau should be considered to be integral to a PD biomarker mix that represents the anatomical and molecular basis of motor and nonmotor symptoms in PD.

Studying Dopamine Metabolism as a Biomarker

In animal models, the accumulation of αS aggregates impairs dopamine transmission, but eliminating these aggregates enhances dopamine release and utilization in the nigrostriatum.19 Reducing αS oligomers results in improved dopaminergic neuron activity in PD patients20; therefore, simultaneous measurement of oligomeric αS and dopamine is an index of functional activity of dopamine neurons. Total and oligomeric αS as well as 2 dopamine metabolites—homovanillic acid (HVA) and 3,4-dihydroxyphenylacetic acid (DOPAC)—are robustly measured in the CSF of patients with PD.20 The brain contributes 10% to 15% of the plasma levels of HVA21; most of the circulating levels of HVA come from intestinal metabolism of dopamine, while DOPAC is a principal metabolite of brain dopamine and is transported from the brain to the plasma for excretion.22 Therefore, dopamine utilization and metabolism should be measured via concurrent CSF and plasma levels of HVA and DOPAC to indicate drug disease-modifying effects. 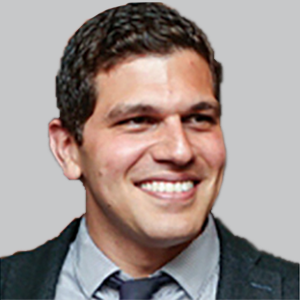 In 2014, a seminal report showed the effects of an oncologic agent called nilotinib (Tasigna; Novartis) as a potential treatment in PD.23 Nilotinib lowers αS, including oligomers; reduces p-tau, via autophagy; and improves dopamine metabolism. A phase 1 study in late-stage (Hoehn &Yahr stages 4-5) levodopa-unresponsive PD and LBD patients demonstrated the feasibility of nilotinib.24 Nilotinib potently targets discoidin domain receptor (DDR)-1 at IC50 of 1 nM and much less potently inhibits Abelson (c-Abl) at 20 nM. It is FDA approved for chronic myelogenous leukemia.25

Phase 2 studies investigated the effects of nilotinib in medically optimized patients with moderately severe PD for 6 months,26 12 months,20 and 27 months.27 These phase 2 studies were underpowered for clinical outcomes, but they all met their primary objectives, demonstrating that nilotinib is safe. However, significant differences existed among these studies. Pagan et al showed that CSF nilotinib concentration is adequate to inhibit DDR1, but not c-Abl, and nilotinib treatment stabilized total αS, partially reduced oligomeric αS and lowered p-tau in a dose-dependent manner.20 Simuni et al, however, did not explore nilotinib effects on these biomarkers.26 Methodologically, Simuni et al performed one-time collection of CSF and serum, after 2 hours, that led to underestimation of drug availability.26 In 2019, Pagan et al staggered CSF collection at 1-4 hours, 30 minutes after blood draw, to obtain population-based pharmacokinetics.20,28 Monoamine oxidase B (MAO-B) inhibitors were allowed (>30%) in the study by Simuni et al,26 thus altering the level of dopamine metabolism, whereas the studies by Pagan et al excluded MAO-B inhibitors.20 Simuni et al26 did not control for levodopa in medically optimized patients28 and did not detect changes in dopamine metabolites. In contrast, data from animal studies,23 human phase 1 studies,24 phase 2 studies in PD, and phase 2 studies in levodopa-naïve patients with AD consistently demonstrated dose-dependent increases in dopamine after nilotinib treatment.20,29 This discrepancy could also be due to concurrent measurement of 17 metabolites that reduce the optimization of specific dopamine metabolites in serum and CSF by Simuni et al,28 whereas Pagan et al20,28 and Turner et al29 measured only 2 dopamine metabolites in plasma and CSF. It is imperative to mention that the placebo and nilotinib groups did not decline using UPDRS at 6 months and 12 months, indicating that all patients were medically optimized. However, treatment of 27 months with nilotinib suggested that 300 mg is beneficial for motor, cognitive, and behavioral symptoms in medically optimized patients.27 These long-term effects are consistent with disease modification showing evidence of increased autophagy flux in animal models and CSF microRNA levels in PD and LBD patients.23,30 In addition to nilotinib, which will be investigated in phase 3 studies (KeifeRx), 2 c-Abl inhibitors are currently in phase 2 clinical trials, including K0706 in early PD (Sun Pharmaceuticals) and LBD (at Georgetown University) and bosutinib (Bosulif; Pfizer) in LBD (also at Georgetown University).

Immune and Gene Therapies and Other Strategies 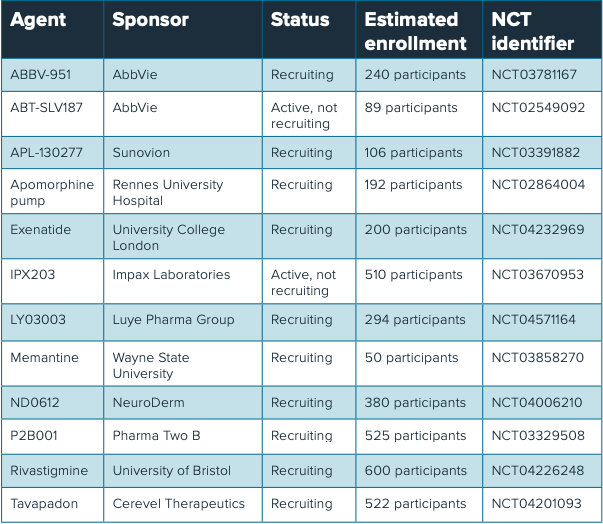 Several other strategies are in the pipeline for PD (TABLE).31 Deferiprone (Ferriprox; Chiesi) is FDA approved to treat some thalassemia syndromes as an iron chelation agent and is currently in phase 2/3 assessment for PD (at University Hospital, in Lille, France).32 The effects of glucagon-like peptide analogue (exenatide) on mitochondrial function (at Karolinska Institut, in Solna, Sweden) and a muscarinic and sigma-1 receptor agonist (ANAVEX 2-73; Avanex Life Science) are being investigated in phase 2 studies.

Targeting αS with the monoclonal antibody (mAb) BIIB054 (Biogen) did not meet its primary objectives. The mAb PRX002/Ro7046015 (Prothena/ Roche) and the glucocerebrosidase inhibitor GZ402671/SAR02671 (Sanofi), which prevents αS accumulation, are currently in phase 2. A number of phase 1 studies using anti-αS mAbs, like MEDI1341 (AstraZeneca/Takeda), ABBV-0805 (AbbVie), LU AF82422 (Lundbeck), PD01 AFFITOPE (AFFiRiS), and NPT200-11/UCB0599 (Neuropore/UCB) are being studied to prevent αS aggregation. mAbs may have significant hurdles entering the cytoplasm and ligating αS en route to degradation. This strategy has yet to prove its success in human clinical trials.

Many agents show promise in having disease-modifying effects in PD, but in order to prove their viability, a specific target engagement and related biomarkers must be studied with the correctly termed clinical outcomes. Each agent may require unique criteria. 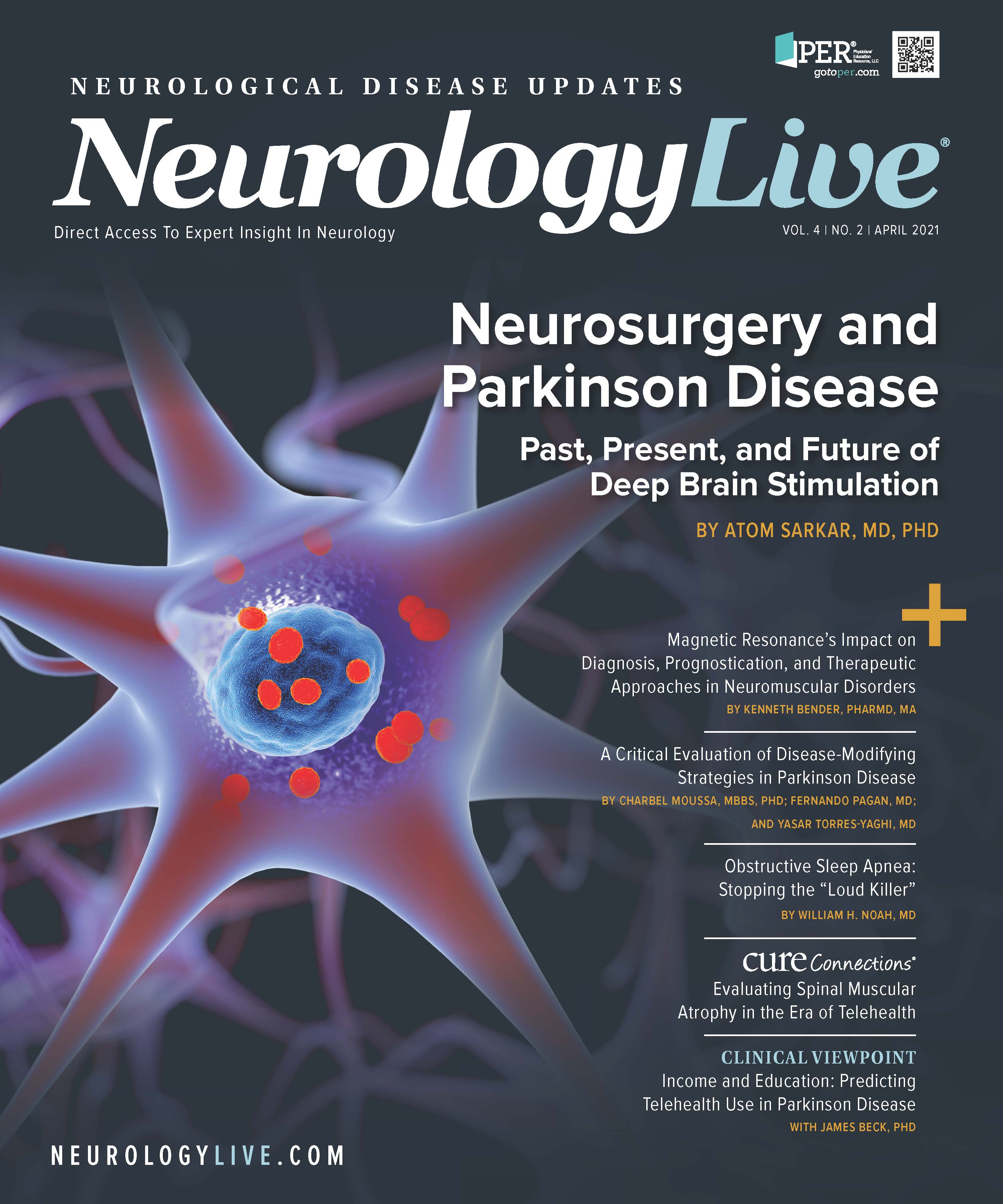