Formerly known as BIIB067, the antisense oligonucleotide is expected to be available for rapidly progressing patients in mid-July 2021, and for the broader SOD1-ALS population in the fall. 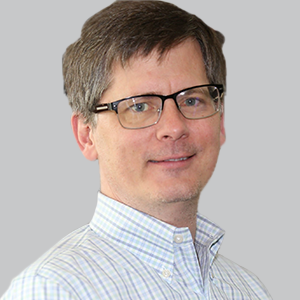 Biogen has announced that its investigational SOD1 amyotrophic lateral sclerosis (ALS) agent, tofersen, which is still being assessed in a phase 3 clinical trial (NCT02623699), will be made available to patients through a 2-phase compassionate use program beginning this summer.1

The first part of the access program is set to begin in mid-July 2021, with eligible patients including rapidly progressing patients—those with an ALS Functional Rating Scale-Revised (ALSFRS) slope decline greater than or equal to 2 points per month. Then, in the fall of this year, the company aims to offer access to the broader SOD1-ALS patient population—estimated to consist of near 2% of the greater ALS population—through an expanded access program, as long as there are no further study requirements, and specifically in countries where the practice is allowed by regulations and for whom Biogen can ensure future access to tofersen, formerly known as BIIB067 (FIGURE). All of this will take place prior to application submission to the FDA.

Individual requests for access must be submitted by the patient in question’s treating physician, Biogen noted. “As you know well, Biogen’s quest to defeat ALS spans decades. While we hope this study’s results will be positive, we know firsthand that promising drugs can fail in Phase 3 studies. We are committed more than ever to advance ALS research and to work alongside the community to evolve our processes to meet the needs of people impacted by ALS,” the company wrote in a statement.1 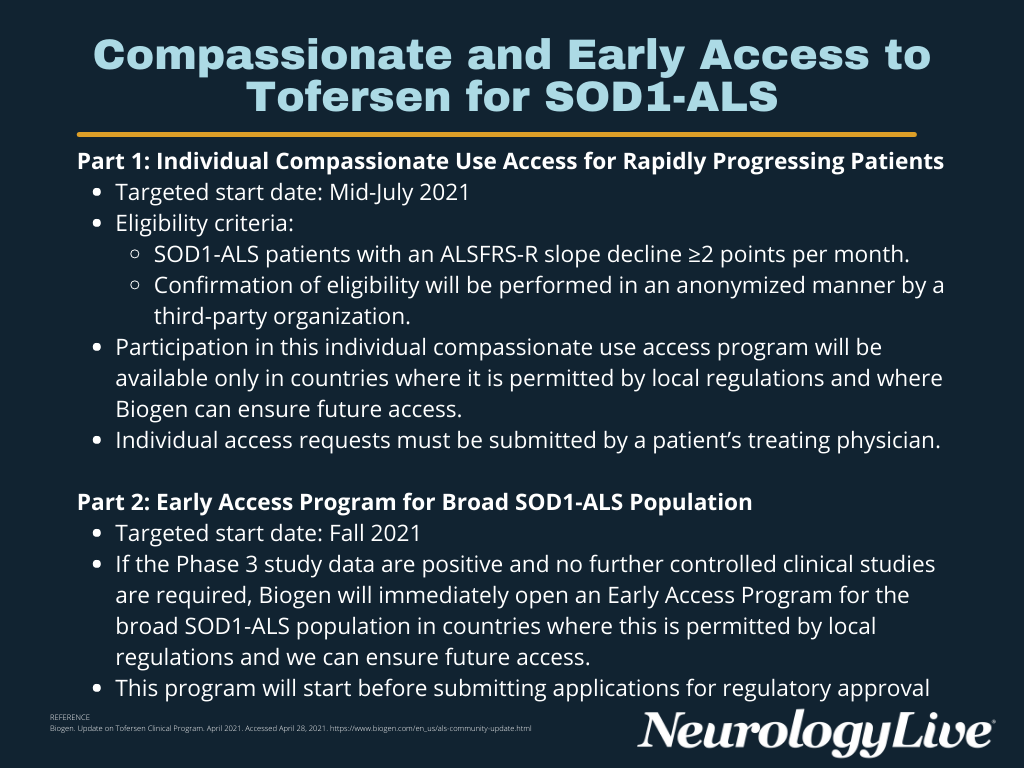 FIGURE. Compassionate and Early Access to Tofersen for SOD1-ALS

The phase 1/2 results from VALOR were published in the New England Journal of Medicine in July 2020, suggesting that the antisense oligonucleotide reduces the concentration of SOD1 in the CSF of patients. Ultimately, over a period of 12 weeks, the difference in the change from baseline in CSF SOD1 concentration favored that administered intrathecal tofersen, which was assessed in a number of doses—20 mg (n = 10), 40 mg (n = 9), 60 mg (n = 9), and 100 mg (n = 10)—compared to placebo across doses (n = 12). As for safety, CSF pleocytosis occurred in some participants receiving tofersen, and lumbar puncture-related adverse events (AEs) were observed in most participants.2

Toby Ferguson, MD, PhD, vice president, and head, Neuromuscular Development Unit, Biogen, said in a statement at the time, “By evaluating genetically validated targets such as SOD1 in defined populations, we believe we can more quickly identify how to treat this devastating disease. Biogen is committed to furthering ALS research in an effort to potentially bring a therapy to people living with this rapidly progressing neurological condition.”3