A New Approach to Communicating Hydrocephalus: An Overdue Opportunity

A pair of cerebrovascular and neurosurgery experts discuss a novel approach to communicating hydrocephalus with an arachnoid granulation using a miniature implant, delivered via a percutaneous endovascular catheter. 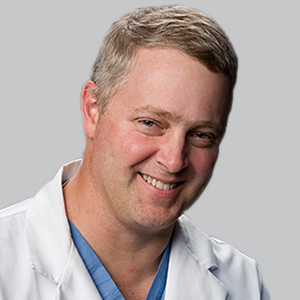 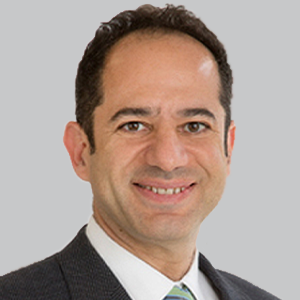 Hydrocephalus is a significant neurologic condition that results from an imbalance of cerebrospinal fluid (CSF) production and CSF resorption. Approximately 80% of patients have communicating hydrocephalus while 20% have obstructive hydrocephalus. In communicating hydrocephalus, the site of obstruction is in the subarachnoid space over the brain convexity or at the level of the arachnoid granulations where CSF passes into the venous system. Impaired CSF resorption results in CSF accumulation leading to increased intracranial pressure, headaches, nausea, vomiting, a host of neurological symptoms, and even death.

The Unacceptable Failure Rate With Standard of Care

The current treatment for communicating hydrocephalus—ventricular-to-peritoneal shunt (VP Shunt) placement—was developed over fifty years ago. VP shunt placement is performed under general anesthesia and typically requires two or three separate skin incisions. A burr hole is drilled in the patient’s skull and a ventricular catheter is passed through the cerebral cortex and white matter of the brain into the cerebral ventricle. A “shunt passer” is used to tunnel the shunt tubing through the subcutaneous tissues from the head, down across the neck and chest to the abdomen, where the distal end of the shunt is placed into the peritoneal cavity. VP shunt placement usually involves shaving a portion of the patient’s head. Typically, patients require a post-procedure hospitalization of 2 to 4 days. VP shunt placement comes with a high price tag: A VP shunt procedure in the United States is estimated to cost approximately $35,000.

Despite 6 decades of experience and refinement, VP shunts continue to have a high failure rate. Proceedings from the most recent NIH-sponsored symposium on hydrocephalus research report that “despite many advances in the design of the CSF shunt, there have been few improvements in the rate of shunt malfunction, with greater than 40% of first-time shunts failing within 2 years.”1 Many of these failures occur quickly—often during the first six months following placement. Common VP shunt failure modes include infection, obstruction, disconnected componentry, and CSF over-drainage.

Each VP shunt failure typically requires revision surgery. Due to the high rate of failure of the current approach, it is estimated that approximately half of the 130,000 VP shunt procedures performed annually in the United States and Western Europe are VP shunt revisions. These subsequent surgeries often involve longer hospital stays and potentially lead to developmental disabilities and patient morbidity. VP shunt infections or the development of a subdural hematoma from CSF over drainage often lead to prolonged hospitalization. Programmable shunt valves, anti-siphon designs, and antibiotic-impregnated catheters have had little impact on the high rate of revision surgery and VP shunt failures.

Transforming Care With a Minimally Invasive Treatment for Communicating Hydrocephalus

Patients, clinicians, and government agencies have been calling for decades for a better treatment option for communicating hydrocephalus. We have developed a novel, disruptive technology that could be the first minimally invasive treatment for communicating hydrocephalus. This new approach, currently under development, removes excess CSF from around the brain by mimicking the function of an arachnoid granulation using a miniature implant (eShunt) which is delivered using a percutaneous endovascular catheter. It is designed to avoid the need for any incisions, extended hospitalization, and post-procedure pain management (FIGURE). There will be no need to shave the patient’s head. It is possible that this treatment can be performed without general anesthesia. 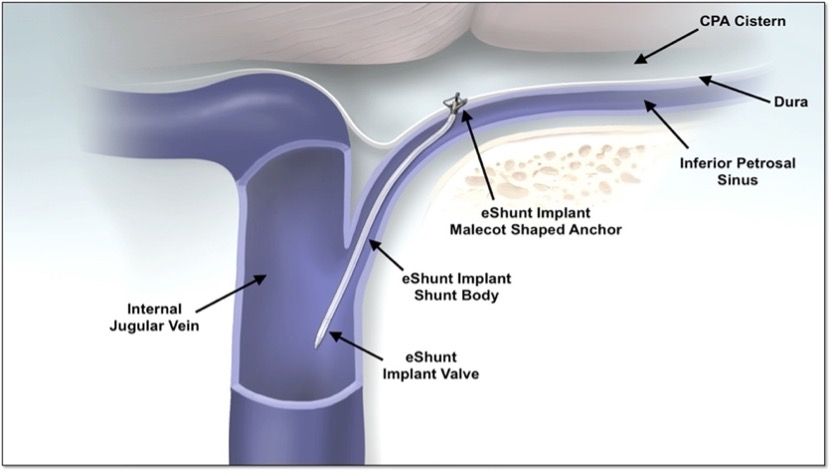 This novel treatment for communicating hydrocephalus involves deploying the small one-way valved eShunt from the cerebellopontine angle CSF cistern to the jugular vein using a small catheter in a neuroangiography suite. This device would be placed using standard venous access in the femoral vein and fluoroscopic guidance. Since the device drains CSF from the cisterns in front of the brainstem directly into the venous system, there is no need to pass a catheter into or through brain parenchyma. This new technology could be performed as an outpatient procedure, reducing the lengthy and costly hospital stays associated with VP shunt placement. It is designed to reduce not only a patient’s pain, but also forego multiple scalp and abdominal incisions, and decrease the risk of infection and CSF over-drainage.

There is no question that a safer, more effective treatment is needed for communicating hydrocephalus. The complication rate of VP shunt placement is just too high. We are hopeful that our new minimally invasive endovascular approach will dramatically improve patient comfort and quality of life. The first human trial of endovascular CSF shunt placement is currently underway and promises to shed more light on this novel treatment. After a decades-long wait, this new technology has great potential not only to significantly improve patient outcomes but to substantially decrease the overall cost of treatment for this serious condition.

Adel M. Malek, MD, PhD is Director of the Cerebrovascular and Endovascular Surgery Division and Chief of Neurovascular Surgery at Tufts Medical Center. Carl B. Heilman, MD is Neurosurgeon-in-Chief at Tufts Medical Center and Chairman of its Department of Neurosurgery. They are co-inventors of the eShunt System, which is intended to offer the first minimally invasive treatment for communicating hydrocephalus and an improvement to the current standard of care.

The eShuntTM Device is an investigational device and not available for sale within or outside the United States.