Jinsy Andrews, MD, MSc, FAAN, on Engaging With Patients and Colleagues Amid an Advancing Neuromuscular Field

The director of neuromuscular clinical trials at Columbia University Irving Medical Center shared her perspective on the discussions that took place at MDA 2022 and the importance of collaboration among clinicians and researchers. 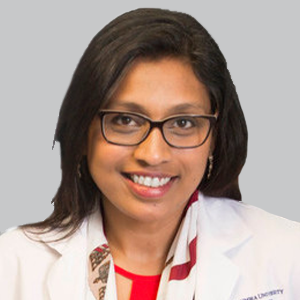 This is a 2-part conversation. Click here for part 1.

At the 2022 Muscular Dystrophy Association (MDA) Clinical & Scientific Conference, March 13-16, in Nashville, Tennessee, a session was held that featured a discussion about treatment selection and management for a variety of neuromuscular disorders. The session sought to share knowledge about a rapidly advancing therapeutic landscape that can be potentially challenging to keep up with completely.

Jinsy Andrews, MD, MSc, FAAN, who herself sees patients with ALS, was among those clinicians in the session. Andrews, the director of neuromuscular clinical trials at Columbia University Irving Medical Center, spoke with NeurologyLive® at MDA 2022 to discuss how conversations with patients have been going amid this progress. She discussed the need to keep up on the therapies entering the field in order to continue to better understand their benefits to patients and the optimization of their timing. Andrews also shared her highlights from the MDA’s annual meeting.

NeurologyLive®: How do you approach conversations with patients about novel or multitherapy approaches? What's your advice for navigating those conversations?

Jinsy Andrews, MD, MSc, FAAN: I'll take ALS for an example because, on the surface, it might not look like we have so many decisions to make because there are only 2 FDA-approved therapies. But inherently, when you're having discussions about treatment decisions, it's about the FDA-approved therapies and being well informed about those but also knowing what other things impact disease progression and can modify that progression. Sometimes it's not pharmacological treatments, it's nonpharmacological treatments like respiratory care or nutritional care that people not people may not find so sexy. Then beyond that, when you're in an area with high unmet need, like ALS, and we've gone through all of the things that are available, what are the next steps? Talking about experimental therapies or clinical trials and layering that on to already approved therapies and already known nonpharmacological interventions.

Then part of bringing everyone together at a meeting like MDA is when we have those discussions and share from our experiences what factors that people living with ALS, for example, consider when they talk about clinical trials. What's important to them? What phase is that clinical trial in? What's the route of administration? How frequent are the visits to the center? Because most centers are pretty far from most people? What are the adverse effects? What's the mechanism of action? What's the route of administration? Are you going to do a major procedure to give me that experimental therapy or not? Then, going even beyond that, into expanded access or especially if you've exhausted all other options for treatment. For example, Duchenne muscular dystrophy has multiple approved therapies. There are steroids and deflazacort, but also multiple exon-skipping agents, which was new for me to learn, because DMD is not something I commonly see—I see more ALS. But understanding how they work, who's the appropriate population, having that discussion, and doing the appropriate testing to ensure that you have enough information to make the judgment call is important. And having that discussion openly with people, that's very important in this type of meeting and helps to bring that information together, but more importantly, bring clinicians who specialize in those particular diseases together so that they can share their experiences. Right now, we might not have all the data, so we have to get our information from consensus, or from people's experiences to date.

When it comes to the timing of therapy, where is the gap being bridged in figuring that out to get closer to that precision medicine model?

Limb-girdle muscular dystrophy is one example of multiple genotypes producing a similar phenotype. ALS is a very heterogeneous disorder, but also in the genotype, there are multiple genotypes that cause ALS. So, as technology improves and as we understand more about the gene function and how the gene expresses itself or leads to disease—and we don't know the entire story for all of that—bringing people together to bring the latest up-to-date science on that will help to bridge that gap of information.

It's pretty hard to keep up on that, especially with genetics in all of the neuromuscular conditions because, ultimately, genes play a role somewhere, whether they're risk genes, whether they're genes that cause disease, or what we call epigenetics, the things that surround or influence the expression of the main gene that might be causative. It's a whole world and the of information that really needs to be continually discussed.

Was there a particular session at MDA that stuck out to you?

There was one set of sessions that were dedicated to “Lab to Life.” It's just going from the bench all the way to the clinical setting, and they did it for different diseases. I think that's so elegant because often at scientific meetings the basic science is clustered in one area or one day, then you have the clinical stuff on the other day for that particular disease. But tying it all together also promotes crosstalk and collaboration and networking. I think that's really important and that brings the importance of bringing people together in person.

But obviously, the session about medical decision-making, and learning about the multitude of therapies that are becoming available for diseases that had long been known to have no therapies or one therapy is really eye-opening. I think it speaks to the fact that meetings like this have to occur, and that if I specialize in ALS, and I'm in the session along with myasthenia gravis and spinal muscular atrophy and Duchenne muscular dystrophy, the diseases may be different, but how they approach therapy and how they get there—each of those disease specialties can learn from each other. That's really great, too.

How does that crosstalk and crossover influence the treatment decision discussions and potentially repurposing efforts?

There are a couple of areas where I see there's definite crossover. One is that the genes may be different, but the technologies to intervene upon a gene mutation can be applied, potentially, for different genetic mutations and different diseases. In antisense oligonucleotide therapy, there's one approved for SMA, but that technology is now being used it as an investigational product for ALS targeting specific genes. That's an example. The second is how experimental therapies or basic science research evolves its way to human clinical trials. All of these disease entities, especially in neuromuscular disorders, there are some even rare disorders or even subsets of disorders, that pose challenges to testing those investigational products. Each disease has its challenges that are similar across diseases. For example, Duchenne muscular dystrophy now has a surrogate marker of dystrophin and that's how they have landed on multiple therapies to get approval and access to their patients. But in ALS, we know we have to develop an appropriate surrogate marker to get accelerated approvals and expedite drug development. We learn from other disease entities like that in ways to expedite or be more efficient without compromising the integrity of a clinical trial. Any disease entity that has a small number of patients or is not as prevalent will be challenging in trials. Let's take another example, myasthenia gravis is much more prevalent, but there are already good therapies out there, so recruiting in another clinical trial may pose challenges, and feasibility issues. I think in that way, we can learn from each other when trying to conduct clinical trials and get to a meaningful answer about an experimental therapy.