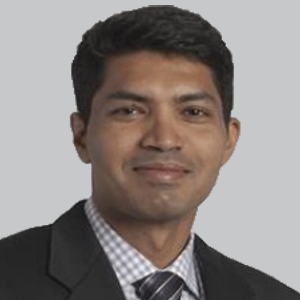 Linear mixed models adjusted for baseline CDR-SB, age, sex, education, and apolipoprotein (APOE) e4 status were used to evaluate longitudinal outcomes. All told, initial nonamnestic symptoms had a faster rate of functional decline than other amnestic symptoms that affect executive, language, and visuospatial outcomes, among these neuropathologies. Given a 10% increase in the number of these patients would increase the change in CDR-SB at 2 years by 0.07 points.

To learn more about the analysis, NeurologyLive® caught up with lead investigator Jagan A. Pillai, MD, PhD. Pillai, a neurologist at the Cleveland Clinic Lou Ruvo Center for Brain Health, provided background on the major take-home points, the clinical application of the results, and how they have significant impacts on the outcomes of future clinical trials.

NeurologyLive®: What was the motivation behind the study?

Jagan Pillai, MD, PhD: The main motivation for the study is that there is a lot of awareness and interest in that Alzheimer disease often presents in ways beyond just the memory loss. Patients could have initial symptoms related to changes in the language, their visuospatial abilities, or judgment. The question was, does the initial symptoms they’re facing matter in terms of their future, prognosis or rate of change? This study basically tried to answer that question. The significance of the study is that the results have good potential impact on interpreting clinical trials. Is it reasonable to compare people that similar or very different kinds of initial symptoms?

Can you discuss the differences in symptoms you were observing?

When people have amnestic symptoms, they have changes in their memory scores whereas people have judgment problems later in life mostly do worse on tasks that engage their frontal lobe or aspects of executive function. For visuospatial changes, they might have problems in tracking visual spatial tests. Language issues are related to coming up with names of things, or verbal fluency. But there was always the thought in the field that people with some of these nonamnestic symptoms do worse on cognitive tests, but maybe not on functional abilities. The Clinical Dementia Rating-Sum of Boxes, a measure used in trials to track functional and cognitive changes, was used as the primary outcome. For example, we use the same scale to evaluate the rate of change among these substitute patients in a recent aducanumab trial. The interest in this study is also in that all the diagnoses were pathology-confirmed, so that we know exactly what was underlying these changes. This is from a retrospective cohort study, and similar cohorts, research cohorts, can also be used in clinical trials.

Are there any symptoms that clinicians typically keyed in on as early indicators of cognitive decline and neuropathologies?

The take-home point is that there's likely not a single clinical symptomatology that clues you in that you're looking at a progressive degenerative condition. Depending on what part of the brain gets initially involved, you might have some variations and initial symptoms that are happening. I think it's more shedding light on the heterogeneity of initial symptoms, compared to what people used to think before.

How do these findings impact clinical trials and drug development?

The key outcome of this study was that there was a clear difference between people with nonamnestic symptoms having a faster rate of decline, at two years, than people having amnestic symptoms. If you compared to the slopes of people with nonamnestic and amnestic symptoms and extrapolate that from a drug placebo trial with a 10% difference, you might have a pretty significant amount of cognitive change attributed to the difference in number of subjects having amnestic symptoms, which could either hinder or give a false alarm in terms of interpeting results. That aducanumab study, the two CDR-SB changes were –0.39 in one study and 0.03 in another study. Based on our models, estimating a 10% difference in the anamnestic cases between the two arms, you might get a change in CDR-SB over two years of about 0.07. That's pretty much in between what the success and failure arm. Being aware of this as a potential confounding factor and interpreting and trials is going to be very important, given those slight changes that are being reported from some of the newer clinical trials that are going to come up.