The FDA-approved treatment was associated with a clinically meaningful delay in needing continuous ventilation among patients with Duchenne muscular dystrophy.
By: Marco Meglio
Published: May 11, 2020 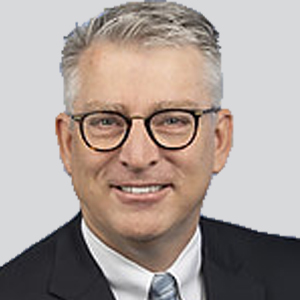 Craig McDonald, MD
Data that were accepted to the American Academy of Neurology (AAN) 2020 Annual Meeting revealed that treatment with eteplirsen (Exondys 51; Sarepta Pharmaceuticals) is associated with a significant reduction in pulmonary decline based on forced vital capacity % predicted (FVC%p) and to the need for continuous ventilation in patients with Duchenne muscular dystrophy (DMD).1

Compared with patients who received standard of care (SoC), eteplirsen-treated patients experienced a statistically significant attenuation in the FVC%p decline (annual rate of decline of 5.96% vs 3.82%, respectively; P <.01).

Senior author Craig McDonald, MD, professor and chair in the department of physical medicine and rehabilitation at the University of California, Davis, and colleagues compared temporal patterns of FVC%p and projected time to continuous ventilation in patients with DMD with exon 51 skippable mutations receiving eteplirsen versus SoC. The study population included 20 patients from Study 204 and 42 patients from Study 301, a subsequently larger efficacy study, who were treated with eteplirsen, as well as an additional 20 controls drawn from the Cooperative International Neuromuscular Research Group (CINRG) database.

A mixed effects model with repeated measures was used to evaluate the impact of eteplirsen on decline in FVC%p, which included glucocorticoid-treated patients between 10 to 18 years.

READ MORE: Gaboxadol Reports Positive Topline Results in Phase 2 for Fragile X Syndrome
The mixed effects model used FVC%p as the response variable, eteplirsen versus control as the treatment group, age (at visit), the interaction between treatment group and age as the fixed effects, and patient as a random effect. Time to continuous ventilation was predicted using a linear extrapolation of the model that estimated decline in FVC%p from average readings observed in patients age 10 to 10.5 years old treated with glucocorticoids in the specific.

Based on an average starting FVC%p of –­77.82% at age 10, the results showed a decline in FVC%p for eteplirsen was associated with a delay of ­­approximately 4.5 years in time to needing continuous ventilation compared with patients treated with SoC; a clinically meaningful delay.

The FDA approved eteplirsen for the treatment of patients with DMD in September 2016. At the time, it was the first drug approved for DMD, and is specifically indicated for patients who have a confirmed mutation of the dystrophin gene amenable to exon 51 skipping.2

Earlier on in its pipeline, the drug was granted orphan drug designation, as well as priority review status and fast track designation. Eteplirsen was also approved under the accelerated approval pathway, which provided earlier patient access while other ongoing trials continued.

Perampanel May Improve Insomnia in Patients With Epilepsy and Anxiety

Researchers found multiple measure correlations between perampanel use and reductions in Insomnia Severity Index scores in those who had comorbid epilepsy and anxiety.
Erenumab Improves Daily Functioning and Quality of Life

The Novartis agent showed significant reduction of migraine days in both the real-world TELESCOPE and PERISCOPE studies in patients with migraine.
Siponimod Shows Long-Term Benefit for Secondary Progressive MS

The drug's impact on neuroinflammation and neurodegeneration in the brain and spinal cord are currently being explored.
Post-Hoc Analysis Suggests Eptinezumab Effective for Migraine at Initial Dosing

Data confirmed the prior results of the PROMISE-1 and PROMISE-2 studies, indicating the preventive effect on migraine with eptinezumab begins as early as day 1 post-infusion.
Real-World Dravet Syndrome Data Suggest Fenfluramine Provides Benefit

The initial report of the US Expanded Access Program for fenfluramine indicates that those with Dravet syndrome treated with fenfluramine (Fintepla; Zogenix) have clinically meaningful responses similar to that observed in clinical trials.
Rimegepant Shows Early Efficacy in Acute Migraine Treatment

The co-director of the Jane and John Justin Neurosciences Center at Cook Children’s Hospital discussed the real-world data collected from the Expanded Access Program for fenfluramine (Fintepla; Zogenix) in patients with Dravet syndrome.
Ofatumumab Displays Superiority to Teriflunomide in Relapsing MS

Data from the OVERCOME study of more than 20,000 respondents suggest that those whose acute migraine treatment was optimized according to the mTOQ had less disability and better quality of life.
M. Scott Perry, MD: Clinical Experience With Fenfluramine in Dravet Syndrome

The co-director of the Jane and John Justin Neurosciences Center at Cook Children’s Hospital discussed his experience with Zogenix’s investigational Dravet syndrome treatment in clinical trials and in the Expanded Access Program.
Epidiolex Has Safe, Consistent Profile Over Long-Term in Tuberous Sclerosis Complex

Treatment with CBD resulted in a significant number of patients with TSC reporting being “much” or “very much” improved on the Subject/Caregiver Global Impression of Change.
Eptinezumab Improves Consecutive Migraine-Free Days, Shortens Migraine Duration

These data on the preventive migraine treatment confirmed findings from previous studies, with eptinezumab not only reducing total migraine days, but elongating the duration of consecutive migraine-free days.
Jeffrey Cohen, MD: The Success of Ofatumumab in Relapsing MS

The neurologist at the Mellen Center for MS Treatment and Research at Cleveland Clinic discussed the findings of a new pooled-data analysis of ofatumumab from the phase 3 ASCLEPIOS I and II trials.
Risdiplam Demonstrates Significant Motor Milestones in Infants with Type 1 SMA

In addition to increased motor milestone achievement, the safety profile of risdiplam was consistent with that observed in previous studies, with no new safety signals identified.
Erenumab Shows Long-Term Success in Migraine Treatment

The anti-CGRP agent showed sustained benefit in reducing migraine frequency as well as good safety over 4 or more years of treatment in a cohort of more than 200 patients.
Ubrogepant More Effective in Mild Pain Migraine Attacks

The assistant professor of neurology at the University of Washington in St. Louis discussed a study she and colleagues conducted which revealed significant differences between practitioners in diagnosing cerebral palsy.
Lasmiditan Improves Migraine-Related Disability

Novartis’s S1P receptor modulator siponimod (Mayzent) showed benefits in a number of patients with SPMS on the Motor Integration and Collateral subscales of the Expanded Disability Status Scale.
Forgot password?