All patients treated with ocrelizumab (Ocrevus; Genentech) were B-cell depleted and had lower SARS-CoV-2 antibody response than any other patients in the study. 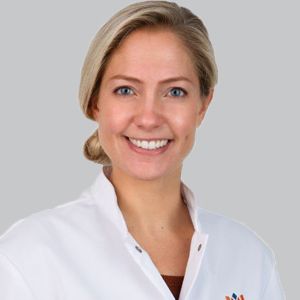 Lead author Zoe L. E. van Kempen, PhD, department of neurology, Amsterdam University Medical Centers, and colleagues also concluded that the results “hold important consequences for humoral immunity after COVID-19 infection and possibly vaccination.” A total of 546 patients with MS were included in the study, 64 (11.7%) of whom had SARS-CoV-2 antibodies detected. Ongoing treatment with disease-modifying therapy (DMT) was recorded in 405 (74.2%) of the total cohort. Signals of antibodies were quantified as normalized optical density (nOD) units, ranging from low (0.1-1.0 nOD) to high (>1.0 nOD).

The investigators also showed that SARS-CoV-2 antibodies were less prevalent in patients using injectable drugs such as interferon ß-1a and glatiramer acetate than patients on other treatments (3 of 69 [4%] vs 44 of 336 [13.1%]; P = .04).

Among those who were antibody positive, 9 patients (14%) did not experience any symptoms suggestive of COVID-19. The loss of taste or smell was the most frequently reported symptom in those positive for SARS-CoV-2 antibodies, found in 30 of 64 patients (47%). In comparison, only 14 of 482 (2.9%) of patients without SARS-CoV-2 antibodies reported these symptoms (FIGURE). Van Kempen et al also noted that there were no COVID-19 fatalities in this MS population. 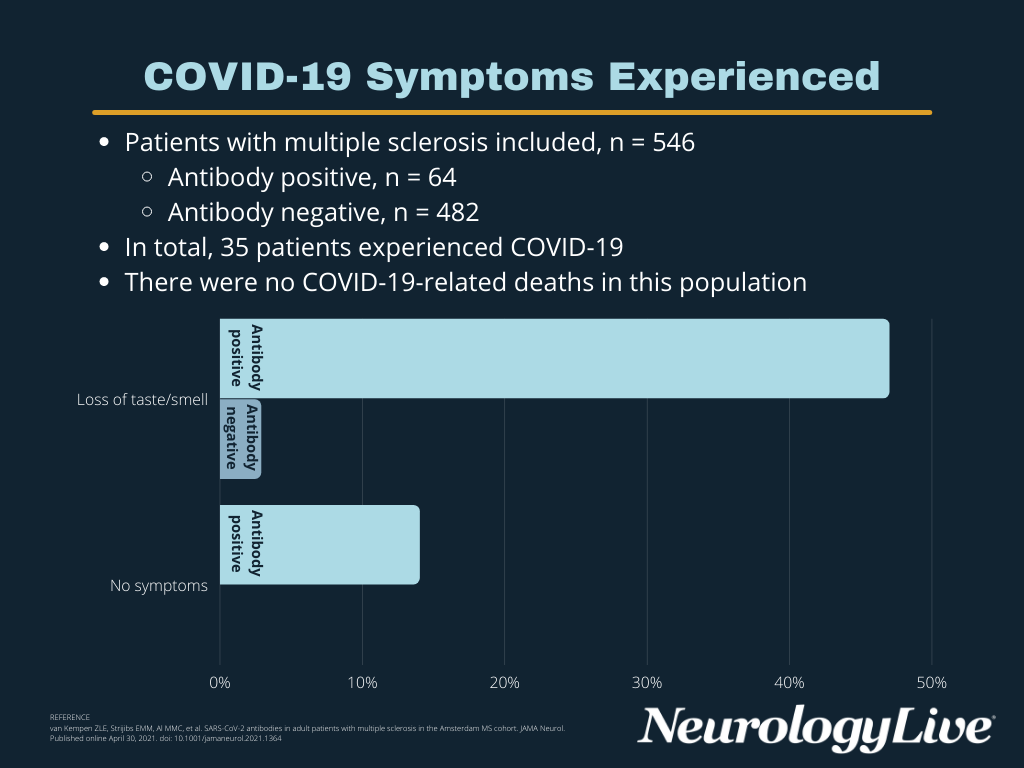 The study included adult patients with a current diagnosis of MS who had visited the MS Center Amsterdam in the past 2 years, beginning on July 31, 2020. The database was closed on December 18, 2020 and the STROBE (Strengthening the Reporting of Observational Studies in Epidemiology) reporting guideline was followed throughout.

Van Kempen and colleagues noted that the relatively low percentage of patients who were SARS-CoV-2 positive posed as a limitation to the study. Despite this, they were still able to show a lower antibody response in patients depleted of B-cells.

Humoral immunity in patients with MS, previously mentioned by van Kempen et al, was just recently observed in a study published in Therapeutic Advances in Neurological Disorders. Investigators found that cladribine (Mavenclad; EMD Serono) was the only high-efficacy DMT that did not impair humoral response in patients with MS who received mRNA-COVID-19 vaccines.2

The same was not observed for the other DMTs evaluated in the study. Patients treated with fingolimod (n = 26; Gilenya; Novartis) showed no development of a post-vaccination humoral response. Only 1 of 26 patients (3.8%) had an antibody response that, although attenuated, was above the cut-off value for a positive response (P <.0001).

Among 44 patients treated with ocrelizumab, 10 (22.7%) demonstrated a protective antibody titer (P <.0001). Additionally, 42 of 44 (95.5%) patients had lymphocyte counts above 1000 cells/mm3, indicating that the failure to develop humoral response was not related to absolute lymphocyte count.