Researchers found that 93% of patients with AS exhibited dystonia in their limbs, mouth, neck, or trunk. 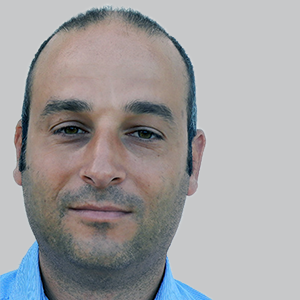 A recent study has identified dystonia as a prevalent clinical feature of Angelman syndrome (AS), despite being under- or unrecognized in previous investigations.

“Dystonia is a common, unrecognized clinical finding in AS. Ninety-three percent of our subjects had dystonia. International Parkinson and Movement Disorder Society Task Force did not report dystonia as a neurological feature of AS. No study evaluated in detail the presence of dystonia in subjects with AS,” wrote first author Edoardo Ferlazzo, MD, associate professor, department of medical and surgical sciences, Università Magna Græcia di Catanzaro, and colleagues.

“Among movement disorders, myoclonus has been widely described, but the presence of dystonia has barely been mentioned in subjects with AS and has not been studied in detail. The purpose of this study is to evaluate the prevalence, clinical features and severity of dystonia in a series of adolescents and adults with AS,” they added.

Ferlazzo and colleagues analyzed video recordings of 30 participants from Italy with AS with a median age of 28 years (range, 15-51), 15 of which (50%) were women. All participants exhibited typical AS phenotypes of impairment of adaptive behavior with a very low mental age, absent speech, facial dysmorphisms, and ataxia.

Researchers analyzed dystonia according to the movement subscore ranging from 0 to 120 of the Burke-Fahn-Marsden Dystonia Rating Scale (BFM). Dystonia was assessed at rest and during voluntary movements and activation maneuvers. Severity scores were determined from individual assessments of each district (limbs, mouth, neck, and trunk) and provoking factors such as writing or walking. 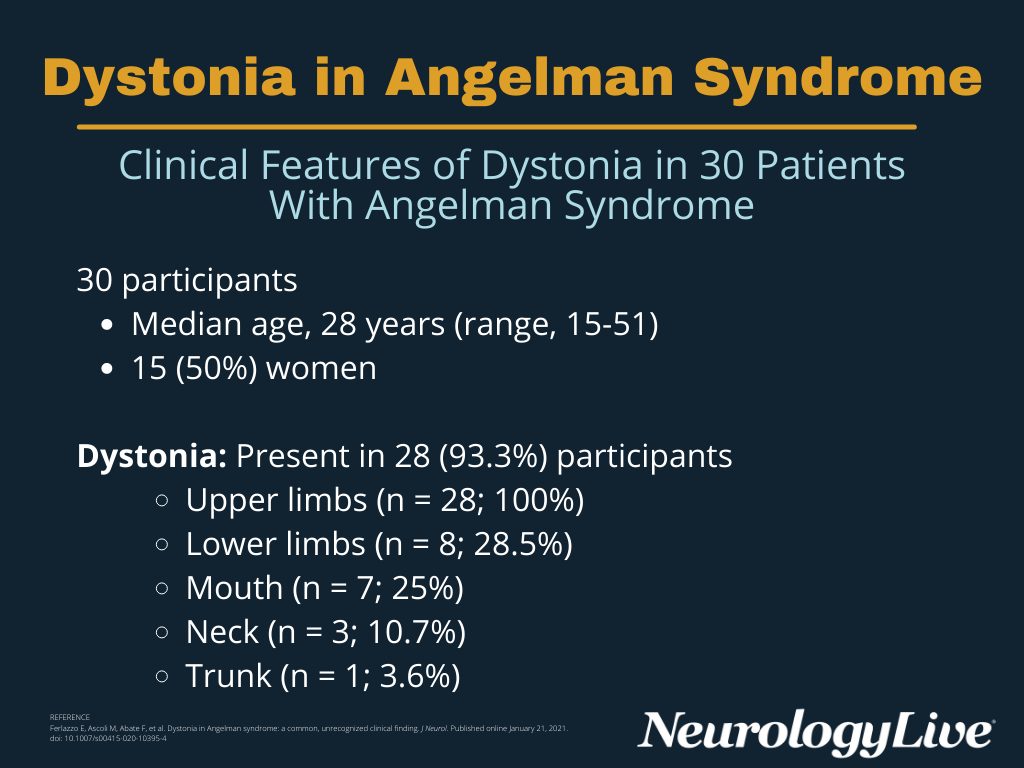 The authors found that 93.3% of participants had dystonia in upper limbs, lower limbs, mouth, neck, or trunk. BFM scores ranged from 0-30. No differences were seen in dystonia severity scores among different genetic subtypes of dystonia, which can arise from a deletion in the critical region 15q11.2-q13 (60% to 75% of cases), point mutations (10%), paternal uniparental disomy (2% to 5%) and imprinting defects (2% to 5%; P = .678).

“The poor attention to [dystonia] in literature may be due to the habitually mild intensity of dystonia and the prominence of other more disabling neurological disorders (cognitive disability, myoclonus, epilepsy, sleep disturbances, etc.) in AS subjects,” Ferlazzo and colleagues wrote. “Moreover, as dystonia appears to be a more prominent feature with advancing age, many studies focusing on pediatric patients may have missed this phenomenon,” they added.

In addition to assessing correlations between genetic causes and severity of dystonia, Ferlazzo and colleagues also assessed correlations with age. They found that there was a linear correlation between increasing age and dystonia severity scores (r correlation coefficient = 0.41; P =0.02).

“Dystonia is common in movement disorder of AS, often involving the upper limbs. The impact of dystonia on global motor performances may not be assessed due to the presence of ataxia and intellectual disability in AS subjects,” Ferlazzo and colleagues concluded.