The Growing Epidemic of TBI in Older Patients

Despite advances in neurology, a silent epidemic of older adults who sustain a TBI is growing. The authors provide tools and tips for a geriatric approach to treatment. 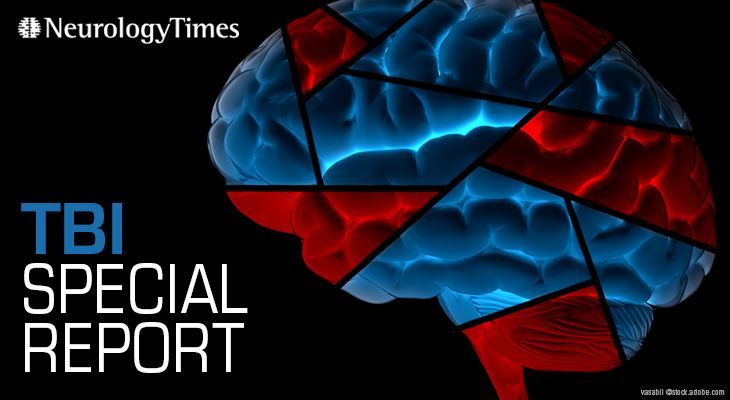 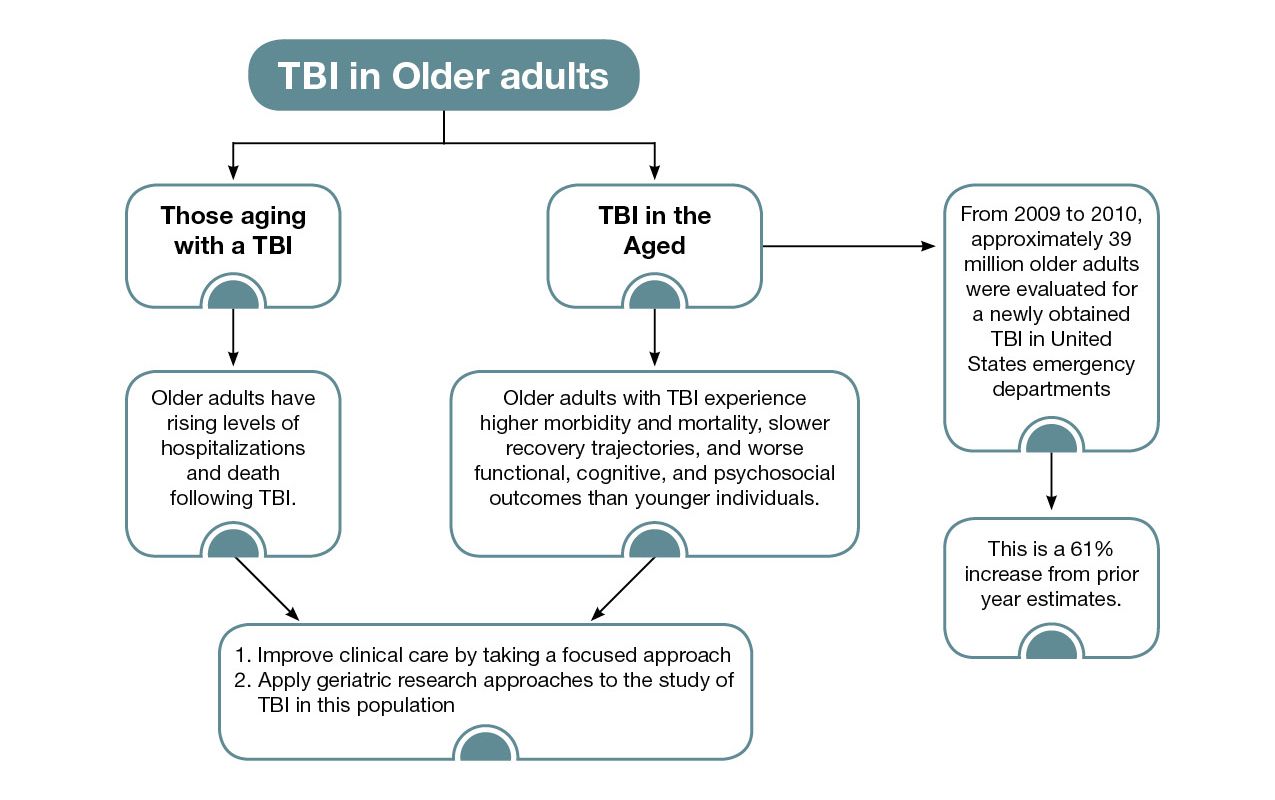 Through the diligent work of many clinicians, researchers, patients, and advocates, traumatic brain injury (TBI) is increasingly recognized as a public health priority. Due to improved diagnostic and treatment modalities, more individuals with TBI are surviving to die of other causes later in life. Media attention has focused on military- and sports-related TBI and progress has been made in decreasing motor vehicle accident-related TBI.

Despite these advances, a silent epidemic of older adults who sustain a TBI remains. These individuals, as well as those aging with a TBI from earlier in life, warrant a focused approach to scientific study and treatment that is informed by, yet distinct from, that of TBI in disparate populations.

Across all age groups, an estimated 5.3 million Americans are living with a TBI-related disability.1 Many of these individuals will live to be older adults (here defined as ≥65 years of age). From 2009 through 2010, approximately 39 million older adults were evaluated for a new TBI in US emergency departments (EDs). This represents a 61% increase from prior year estimates.2 In addition to rising numbers of ED visits, older adults have rising levels of hospitalizations and death following TBI. In fact, as of 2013, adults 75 years and older sustained the highest number of TBIs-exceeding that of infants.3

Aging with a TBI

Most research that examines the effect of TBI on the aging process takes a cross-sectional approach; individuals of different ages are compared rather than following the same individual across time. This lack of longitudinal investigation may be precluding valuable insights into clinical trajectory post-TBI.

In a subset of individuals, it has been found that cognitive and other neuropsychiatric symptoms manifesting acutely after TBI may persist throughout life.4 Conceptually, and making the assumptions that the brain has a finite capacity for recovery and adaptation and that both TBI recovery and aging utilize the same plasticity mechanisms, a brain after TBI may have fewer resources to devote to the aging process. It is important to think of this as an alteration in how the brain handles “normal” aging rather than the onset of a new neurodegenerative process.

When conceptualizing TBI in an aging individual, one should consider how this prior insult may affect the development and progression of neurodegenerative processes. In a recent study of 350,000 military veterans, even mild TBI without loss of consciousness was associated with more than a 2-fold increase in the risk of dementia diagnosis.5

Data from the National Alzheimer Coordinating Center suggest that TBI may be a risk factor for early-onset (<65 years) Alzheimer disease and that disinhibition is more likely to occur in those with both Alzheimer disease and a history of TBI.6 Moreover, findings from a recent meta-analysis suggest an association between TBI and Parkinsonian signs or risk for incident Parkinson disease.7

This literature suggests that in a subset of individuals with a predisposition to develop a neurodegenerative disorder, TBI influences the timing and nature of onset and progression. Although not discussed here due to inconsistencies in the literature, a separate neurodegenerative process directly related to repetitive TBI-chronic traumatic encephalopathy-is also likely to exist.

New onset TBI in the aged

At every point along the arc of a newly sustained TBI, from pre-injury risk factors to acute symptoms and future complications, there exists a nuanced set of geriatric-specific factors to consider. Falls, largely from standing height, are the leading mechanism of TBI in older adults with more women affected.8 As even a single fall is a risk factor for subsequent falls, older adults may be at risk for repetitive TBI.

TBIs that would otherwise be classified as mild place older adults at risk for intracranial bleeding due to intra-cranial changes that occur with aging (eg, dura adherence to the skull, bridging vein fragility, cerebrovascular atherosclerosis) and the increased use of anticoagulant medication. Following a blunt head trauma, older adults may produce a completely normal neurological examination, yet still have evidence of intracranial trauma on head computerized tomography.9 Older adults are also more likely to have pre-existing medical conditions that are associated with worse post-TBI outcomes.10

The cumulative effect of these factors is that, on average, older adults with TBI experience higher morbidity and mortality, slower recovery trajectories, and worse functional, cognitive, and psychosocial outcomes than younger individuals. Layering the variable of aging onto the already complex TBI equation makes outcome prediction all the more difficult.11

Global outcome measures indicate that older adults have greater functional dependence after TBI.8 Unfortunately, differences in cognitive and other neuropsychiatric symptoms between younger and older adults with new onset TBI are vastly understudied. There appears to be an increased dementia risk when new onset TBI is experienced at an older age compared with younger age, particularly for mild TBI (moderate-to-severe TBI more consistently associated at any age).12

Evidence indicates that when it comes to preexisting psychiatric diagnoses, older adults experiencing TBI are less likely to have a previously diagnosed psychiatric disorder.13 TBI significantly increases the risk of new onset depression, anxiety, and/or PTSD in older adults, with evidence of under-recognition and under-treatment.14 On a more positive note, there appears to be a subset of older adults with TBI who achieve outcomes similar to younger patients, which indicates that chronological age and TBI severity are not the sole determinants of outcome.15

A focused approach to clinical care

• Incorporating accreditation standards for geriatric trauma care in future editions of Resources for Optimal Care of the Injured Patient,11 and the Textbook of Traumatic Brain Injury16

This progress should be viewed as a success, although many challenges remain. One such limitation is that the measures used to diagnose TBI and evaluate its outcome were developed in younger cohorts; this makes it difficult to know how applicable these clinical practices are to older adults. As an example, the commonly used Glasgow Coma Scale (GCS) is a reliable predictor of morbidity and mortality in younger, but not older adults who have an abnormal GCS at baseline or an intact GCS despite accumulating intracranial hemorrhage.

Prognostic models for outcome prediction after TBI (eg, CRASH CT, IMPACT) show poor performance in older adults. This could be attributed to the models excluding key geriatric outcome predictors such as comorbidities, polypharmacy, baseline function, and frailty. There remains much work to be done to implement current evidence into widespread practice.

Many clinical studies on TBI implement upper age limits or exclude patients with preexisting conditions. Although this is done in an effort to study true cases of TBI, it excludes older adults and limits the generalizability of a given study. By combining methods commonly used in geriatric research with those already used in TBI studies, the challenges of including older adults in TBI research can be overcome. As an example, in the study of neurodegenerative diseases, a battery of neuroimaging- and blood-based biomarkers are used to supplement clinician evaluations and inform on diagnosis in challenging or ambiguous cases. More research, however, is needed to identify the optimal diagnostic biomarkers in TBI. To address preexisting conditions, geriatric studies often systematically measure and study, rather than exclude for, preexisting conditions and disability. In this way, real-world generalizability can be improved.

Another research barrier is that frail older adults may be unable to complete outcome assessments. This has been overcome in other lines of geriatric research through reliance on proxy informants and study partners. Older adults with TBI are likely to have an informant (eg, spouse, care giver) and a similar approach could be utilized.

Although a relatively new focus in all types of research, innovative follow-up methods, such as home and telemedicine visits, have the potential to increase follow-up rates and generalizability of results. Older adults with TBI may have physical disabilities, perhaps even from the same fall that led to TBI, and this makes involvement in research studies even more difficult. Only by combining methods commonly used in geriatric research with those already used in TBI studies can the research community achieve generalizability to real-world older adults with TBI, develop better diagnostic and prognostic tools to guide care, design inclusive trials, and optimize outcomes.

Working with older adults with TBI is extremely rewarding and is a critical area of study that will become more important as the population ages. That being said, many providers don’t know where to begin or how to unpack the multitude of medical comorbidities existing alongside the TBI. Also, many individuals with new onset TBI will have a history of remote TBI and it can be challenging to ascertain how these histories interrelate. As a result, it is important to distinguish an individual aging with a TBI versus an individual with a new onset TBI later in life. Add to that the variability that occurs with “normal” aging, and the possibility that a neurodegenerative process may develop, and it’s understandable that this population is viewed as daunting by many.

Clinical endeavors, such as comprehensive, multidisciplinary fall and TBI clinics, are invaluable and increasing in number. Geriatric research, particularly on Alzheimer disease and related dementias, has an extensive track record and application of similar techniques to research on older adults with TBI will help move the field forward.

Older adults with TBI deserve the same advocacy and focused study, as sports- and military-related TBI. As individualized medicine and precision medicine continue to be heralded as the path forward, a “one-size-fits-all” approach to the conceptualization, diagnosis, and management of TBI in older adults will be viewed as increasingly antiquated and unacceptable.

The authors report no conflicts of interest concerning the subject matter of this article.

11. Peters ME, Gardner RC. Traumatic brain injury in older adults: do we need a different approach? Concussion. October 3, 2018; Epub ahead of print.