Increasing Confusion in a Man With Chronic Alcohol Abuse

What’s in your differential diagnosis for this cachectic, disheveled patient who can no longer carry on a coherent conversation? 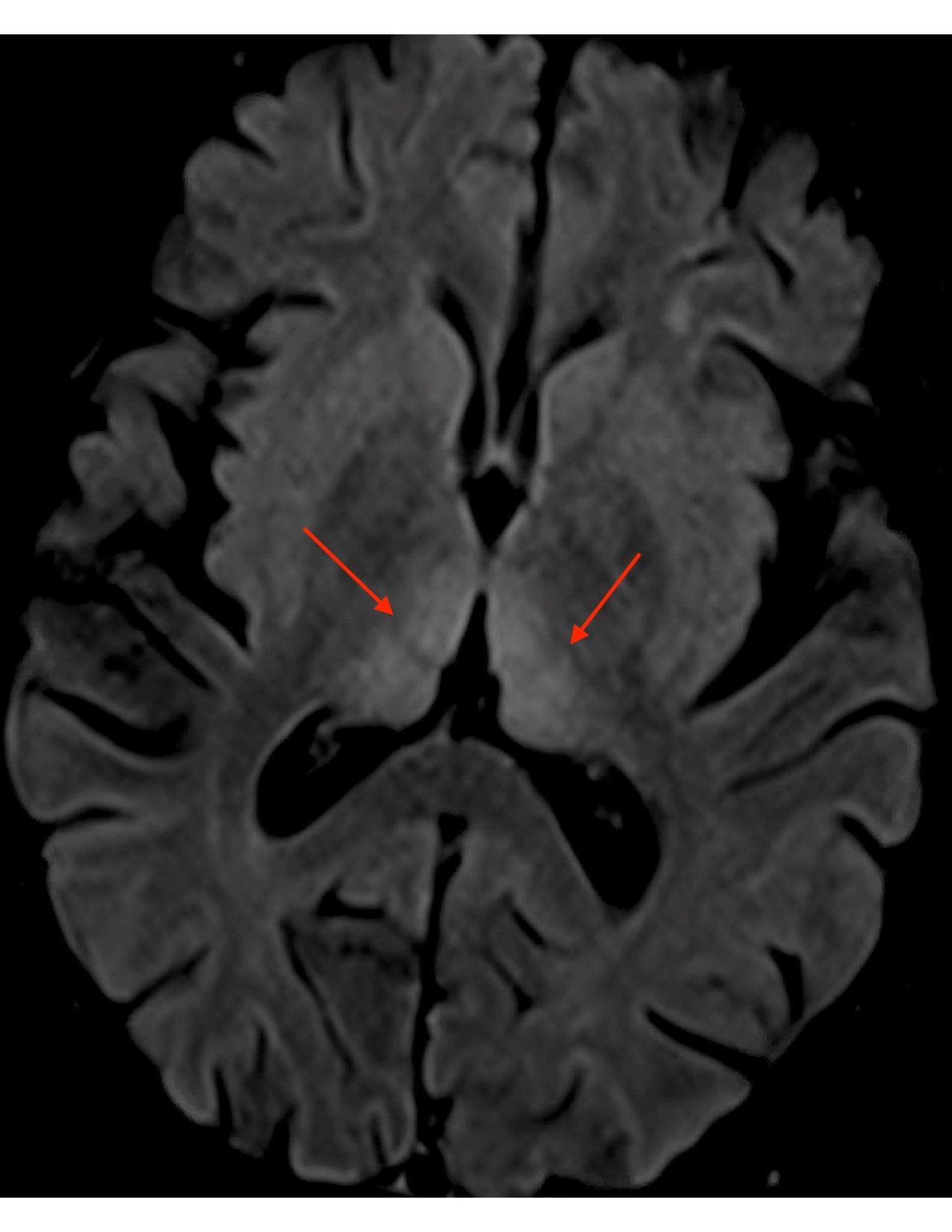 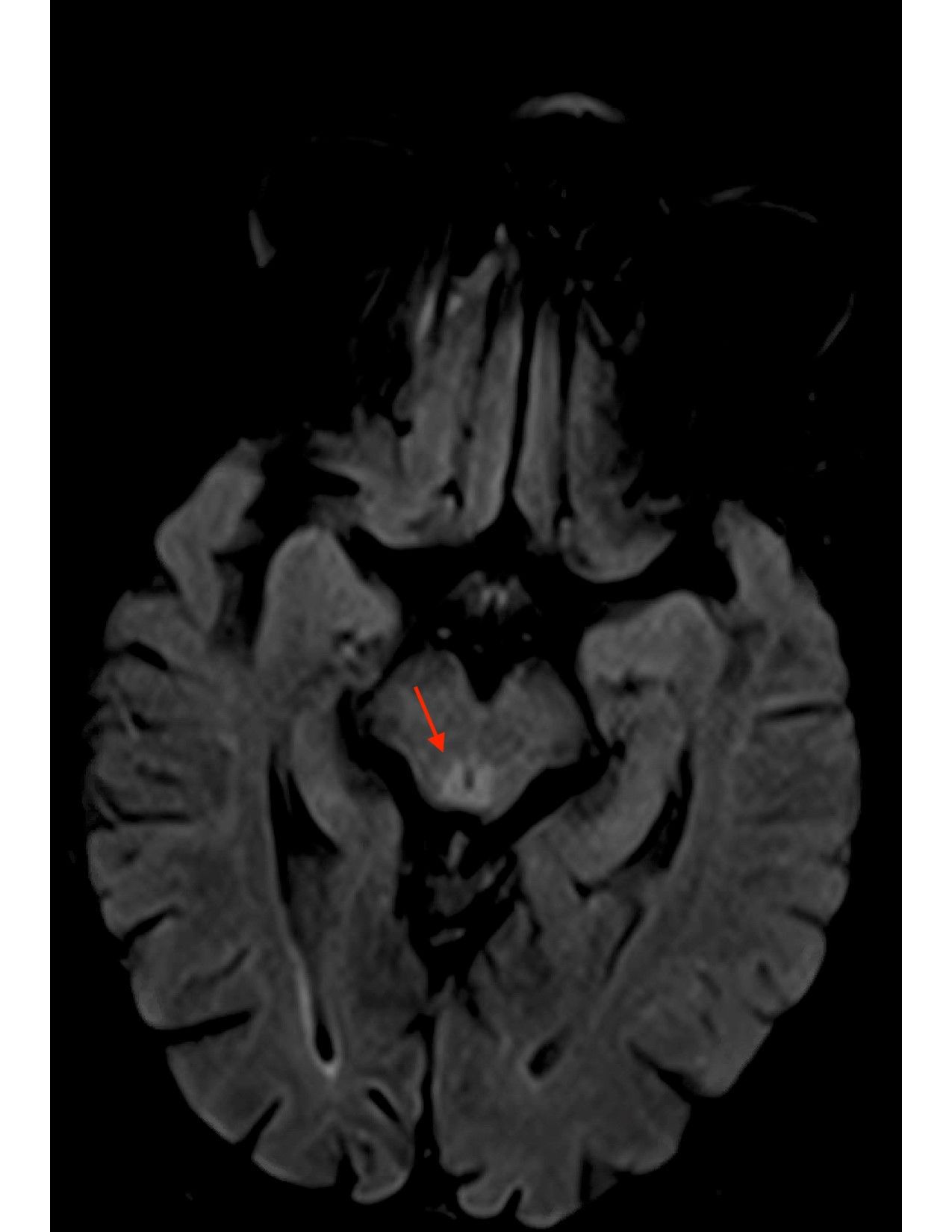 A 60-year-old man is brought to the emergency department (ED) because of increasing confusion.* According to his roommate, the patient had not been eating well for about 3 weeks and was drinking less alcohol than usual. When the patient could no longer carry on a coherent conversation and was “acting like a baby,” the roommate took him to the ED.

Past medical history includes coronary artery disease, chronic obstructive pulmonary disease, and a gunshot wound to the left leg. The patient takes no medications, has no allergies, smokes a pack of cigarettes a day, drinks a pint of liquor a day, and smokes marijuana several times a week. He is single and unemployed.

The patient is cachectic and disheveled. He is afebrile. Blood pressure is 150/110 mm Hg; pulse, 110 beats/min; and respiration rate, 24 breaths/min. He answers questions but is disoriented to person, place, and time. He thinks he is in a restaurant.

He does not cooperate with the neurological examination. Horizontal nystagmus is present bilaterally in the direction of gaze. Otherwise, the results of cranial nerve, motor, reflex, and sensory examination are grossly normal.

A complete blood cell count, electrolyte levels, and metabolic and liver panels are normal. Alcohol level is undetectable. A thyroid panel and vitamin B12 level are normal. Rapid plasma reagin and HIV tests are negative. An urgent head CT scan is normal. An electroencephalogram reveals mild to moderate generalized slowing consistent with a toxic/metabolic encephalopathy.

The patient is given intravenous fluids, multivitamins including thiamine, and acyclovir for possible herpes simplex encephalitis. A lumbar puncture is traumatic and reveals 4 white blood cells, 2000 red blood cells, a protein level of 88 mg/dL, and a glucose level of 57 mg/dL. Gram staining and culture, cryptococcal antigen, and herpes polymerase chain reaction tests are negative. Acyclovir is discontinued.

MRI reveals increased signal in the periaqueductal gray matter (Figure 1) and bilateral thalami (Figure 2), which is suggestive of Wernicke encephalopathy. Thiamine, 100 mg/d, is continued throughout the patient’s hospital stay.

The patient becomes increasingly agitated on hospital day 2 and is treated for delirium tremens with benzodiazepines. He has three generalized tonic-clonic seizures, and phenytoin is started. The patient is unable to feed himself and receives parenteral nutrition. Eventually, he requires a percutaneous endoscopic gastrostomy feeding tube.

Over a period of several weeks, the patient’s level of consciousness slowly improves. After 3 weeks, he can participate in a conversation and follow simple commands but has poor attention and strays off topic. Because he is unable to care for himself, he is discharged to a nursing facility.

What is your diagnosis? >>

First described by Carl Wernicke in 1881, the classic clinical triad of Wernicke encephalopathy is ataxia, confusion, and ocular signs. However, the majority of patients do not present all three findings.1 Ataxia was not appreciated in this patient, in part because he was too weak to walk. However, he exhibited two cardinal features of Wernicke-horizontal nystagmus and encephalopathy.

Symptoms and signs in Wernicke encephalopathy are due to thiamine (vitamin B1) deficiency and constitute a neurological emergency. Thiamine is essential in glucose energy-using pathways, particularly in the central nervous system. Thiamin deficiency also disrupts the blood-brain barrier.

Although a thiamine level was not obtained in this patient, MRI findings were consistent with Wernicke encephalopathy. The likely etiology of thiamine deficiency was chronic alcohol abuse coupled with poor nutrition. Since the human body maintains only a 2- to 3-week thiamine reserve, this patient’s 3 weeks of poor oral intake was sufficient to result in life-threatening thiamine depletion.1

While horizontal nystagmus is the most common ocular sign in Wernicke encephalopathy, other eye findings may include anisocoria, lateral rectus palsies, and papilledema. Encephalopathy can progress to coma. In the chronic phase, the condition may evolve to Wernicke-Korsakoff syndrome, a neuropsychiatric condition characterized by confabulations.2

Unlike brain CT, MRI has a high diagnostic sensitivity for Wernicke encephalopathy. In this case, MRI findings included increased signal in the periaqueductal gray matter (Figure 1) and bilateral thalami (Figure 2), which are two anatomic regions frequently affected in Wernicke.3 Other typical MRI findings include symmetric signal intensity alterations in the mammillary bodies and tectal plate.1

Although Wernicke encephalopathy is often associated with alcoholism, malnourishment due to anorexia nervosa, chemotherapy-induced prolonged vomiting, chronic gastrointestinal disease, hemodialysis, and hyperemesis gravidarum can also result in this syndrome.4 Symptoms may improve with thiamine supplementation, but complete remission may not occur.4,5 Mortality is 10% to 20%, but early treatment is associated with a better prognosis.1,2,6 Intravenous thiamine supplementation is often recommended at 100 mg/d, although alternative dosing has been proposed.5

*Details of this case were significantly changed to protect patient confidentiality.

About the author
Andrew Wilner, MD, is a neurologist who blogs at www.andrewwilner.com/blog. His latest book is The Locum Life: A Physician’s Guide to Locum Tenens.