Get caught up on some of the latest news in Alzheimer disease and dementia, with data updates and expert insights, all in one place from the NeurologyLive® team.

The NeurologyLive® team has been hard at work in the recent weeks conducting interviews with thought leaders and covering the news on the latest updates in the clinical care of individuals with dementia including Alzheimer disease (AD), frontotemporal dementia, dementia with Lewy bodies, and others. Additionally, with the annual meeting of the Alzheimer's Association taking place later this week, our team gained insight from a variety of care providers from around the world about the hottest topics in the field.

To offer an update on those new developments in the literature and insight into the expert opinions about how they’re shaping the ever-changing care paradigm in movement disorders, our team has compiled some of the biggest pieces of news and exciting exchanges with physicians into one place.

Click here for more coverage of the latest Alzheimer disease and dementia news from NeurologyLive®. 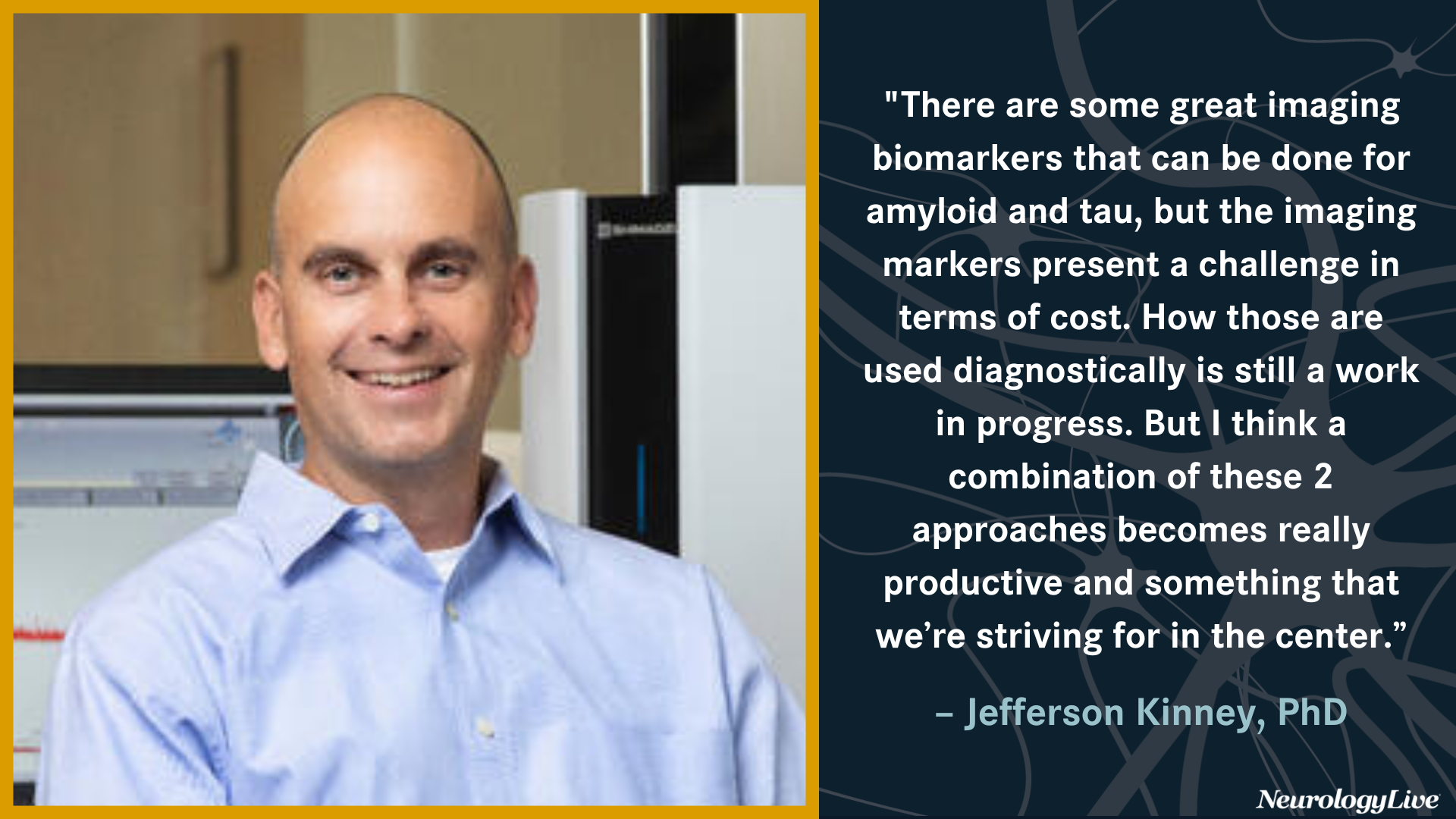 Jefferson Kinney, PhD, is co-leading a collaboration between the University of Nevada Las Vegas (UNLV) and Cleveland Clinic’s Lou Ruvo Center for Brain Health that aims to enhance neuroscience research infrastructure. A recently awarded grant from the National Institutes of Health (NIH) is helping to power phase 2 of the project, which is focusing on developing biomarker, imaging, and clinical research capabilities, among other objectives. Kinney, the founding chair of the Department of Brain Health at UNLV, claims that figuring out the "gold standard” biomarker is still something that escapes the field. In an interview with NeurologyLive®, Kinney disclosed which biomarkers will be evaluated in the upcoming project, along with the need for the community to pare down the amount of biomarkers and come to an agreement on which hold the most clinical value. 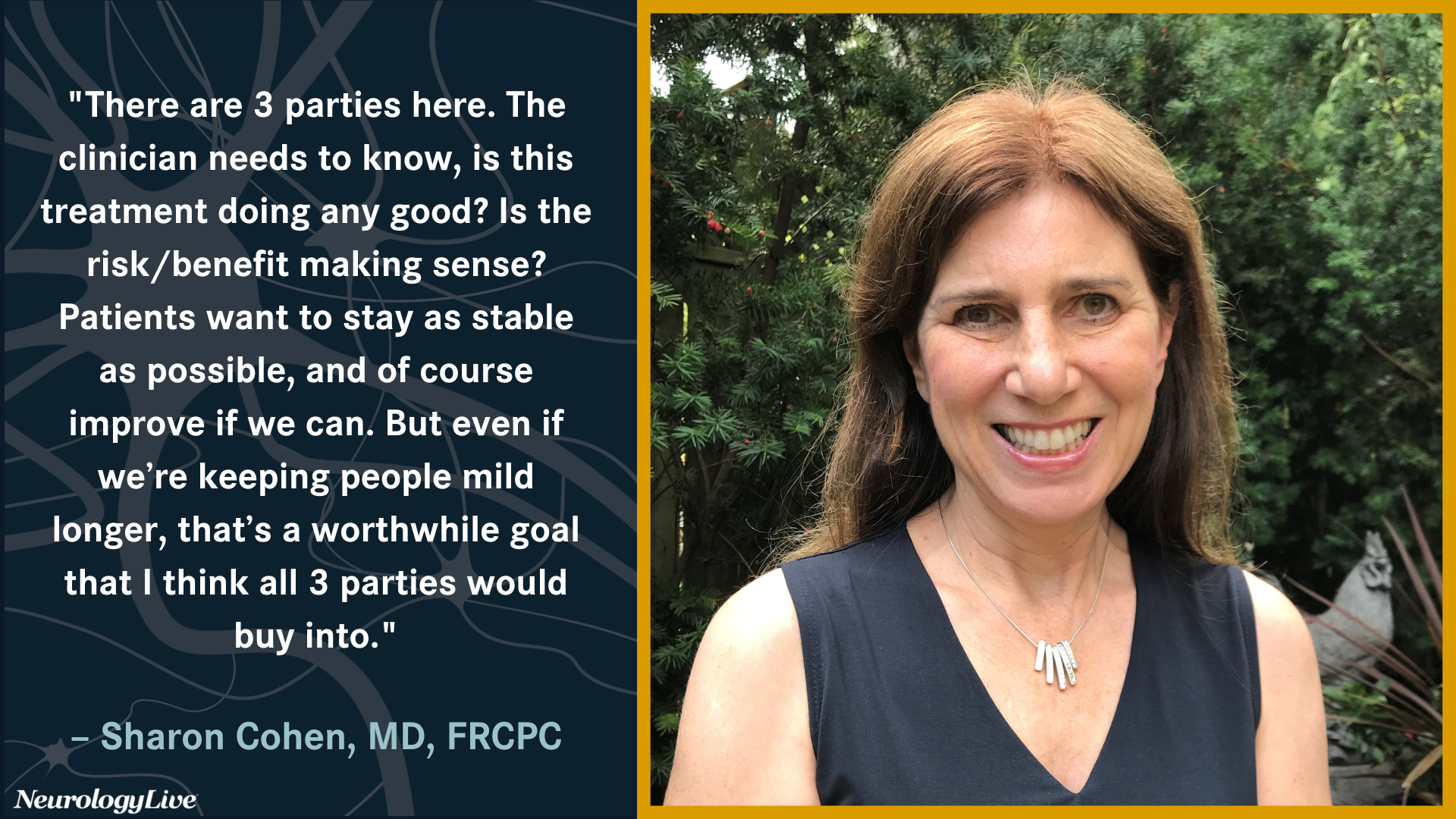 Shortly after its approval, the FDA updated the label for aducanumab to include the treatment of patients with mild cognitive impairment (MCI) or mild dementia stages of the disease, the population in which the treatment was initiated in clinical trials. In a new item-level analysis of the phase 3 EMERGE study (NCT02484547), aducanumab’s treatment effects were observed across all Clinical Dementia Rating-Sum of Boxes domains, the primary end point. Lead investigator Sharon Cohen, MD, FRCPC, and colleagues concluded that the measures used reflected the perspectives of patients, caregivers, and clinicians. Cohen, a neurologist and assistant professor at the University of Toronto, sat down with NeurologyLive® to discuss the shared goals between these groups and the top priorities. She stressed the need to hear all perspectives, including caregivers, as those conversations may have a direct impact on the management of the disease. 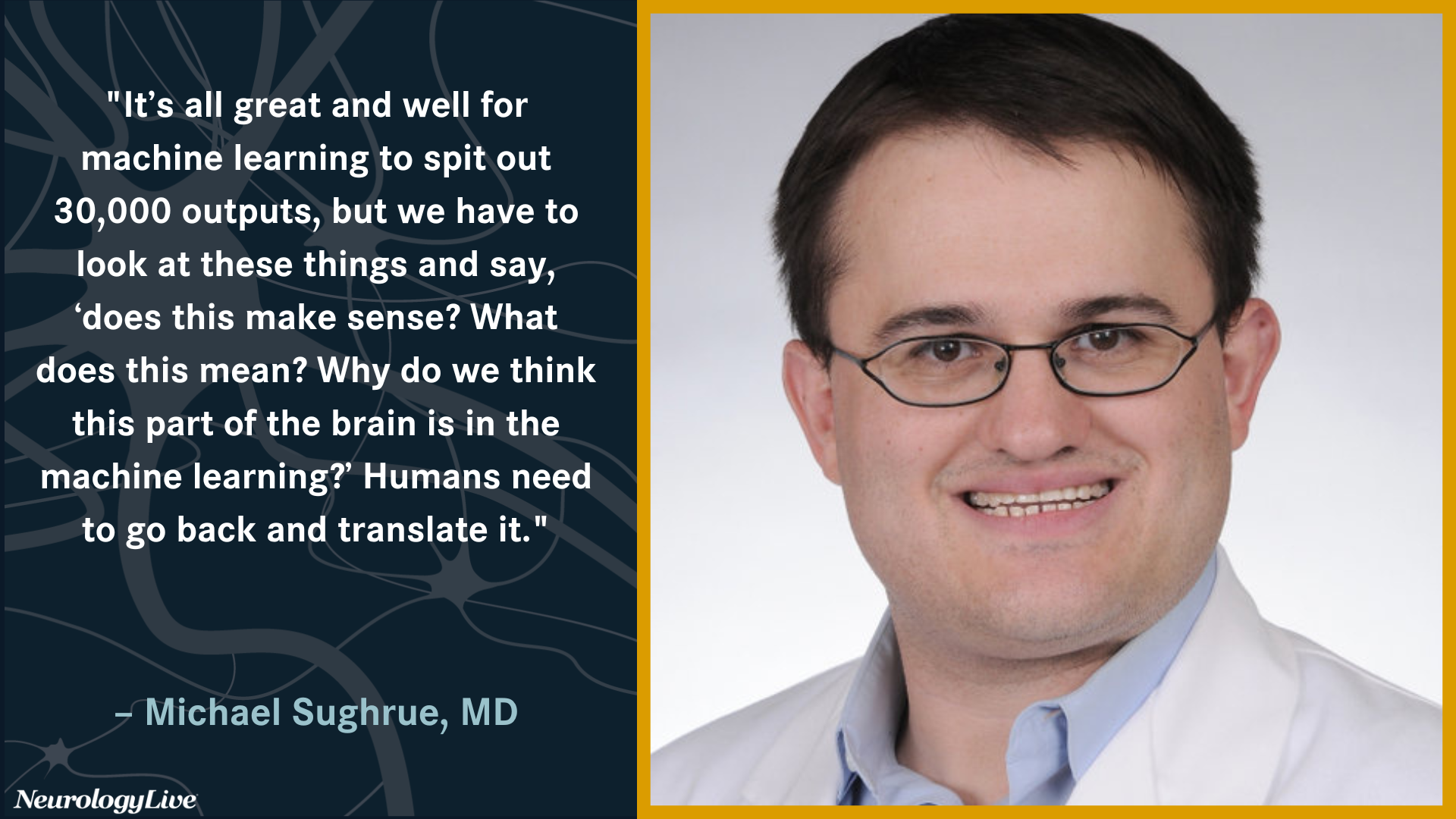 For Michael Sughrue, MD, machine learning may be a key piece to simplifying how clinicians approach neurodegenerative brain disorders. These disorders are complex, involving multiple and different neural dysfunctions, such as regional brain damage, change to cell structure, chemical imbalance, and/or connectivity loss among different brain regions. For example, AD involves many symptoms clusters, including memory loss, apraxia, language impairment, and executive dysfunction, along with neural abnormalities including damage in the hippocampus and neocortex. Sughrue, the founder and chief medical officer of Omniscient Neurotechnology, a company dedicated to improving the brain map through means of big data approaches and “connectomics,” spoke with NeurologyLive® about aspects of the brain that remain unsolved, including the complexities associated with neurodegenerative disorders. He stressed the need to utilize advanced technology, including machine learning and the capabilities of artificial intelligence. 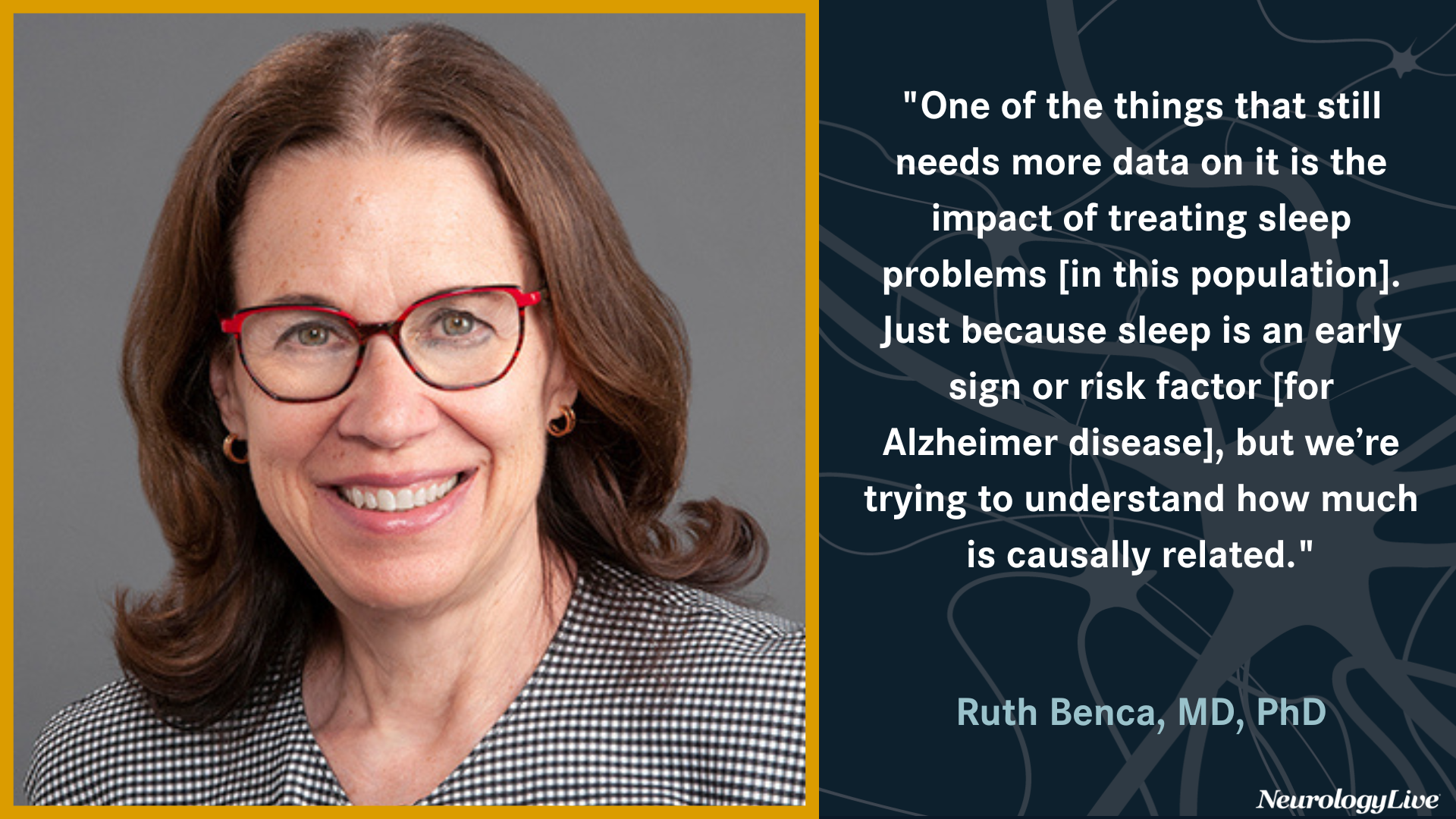 For patients with AD, common sleep issues include difficulties in falling asleep, arousal at night, repeated awakenings and waking up too early in the morning, and sleepiness and frequent naps during the day. Sleep disorders are among the numerous symptoms that can have a significant impact on both the patient and caregiver’s quality of life. Ruth Benca, MD, PhD, is among the large group of clinicians in the field trying to further the understanding of correlations between sleep disorders and AD, noting that there are several factors to take into consideration when assessing the risk of AD. Benca, a professor and chair of Psychiatry & Human Behavior at Wake Forest School of Medicine, presented a talk at the 2022 SLEEP Annual Meeting on the impact and management of sleep problems in patients with AD and their caregivers. Following that, she sat down with NeurologyLive® to discuss the precursor sleep issues to AD, differences in sex and race, and the critical need to treat sleep disorders early as possible. 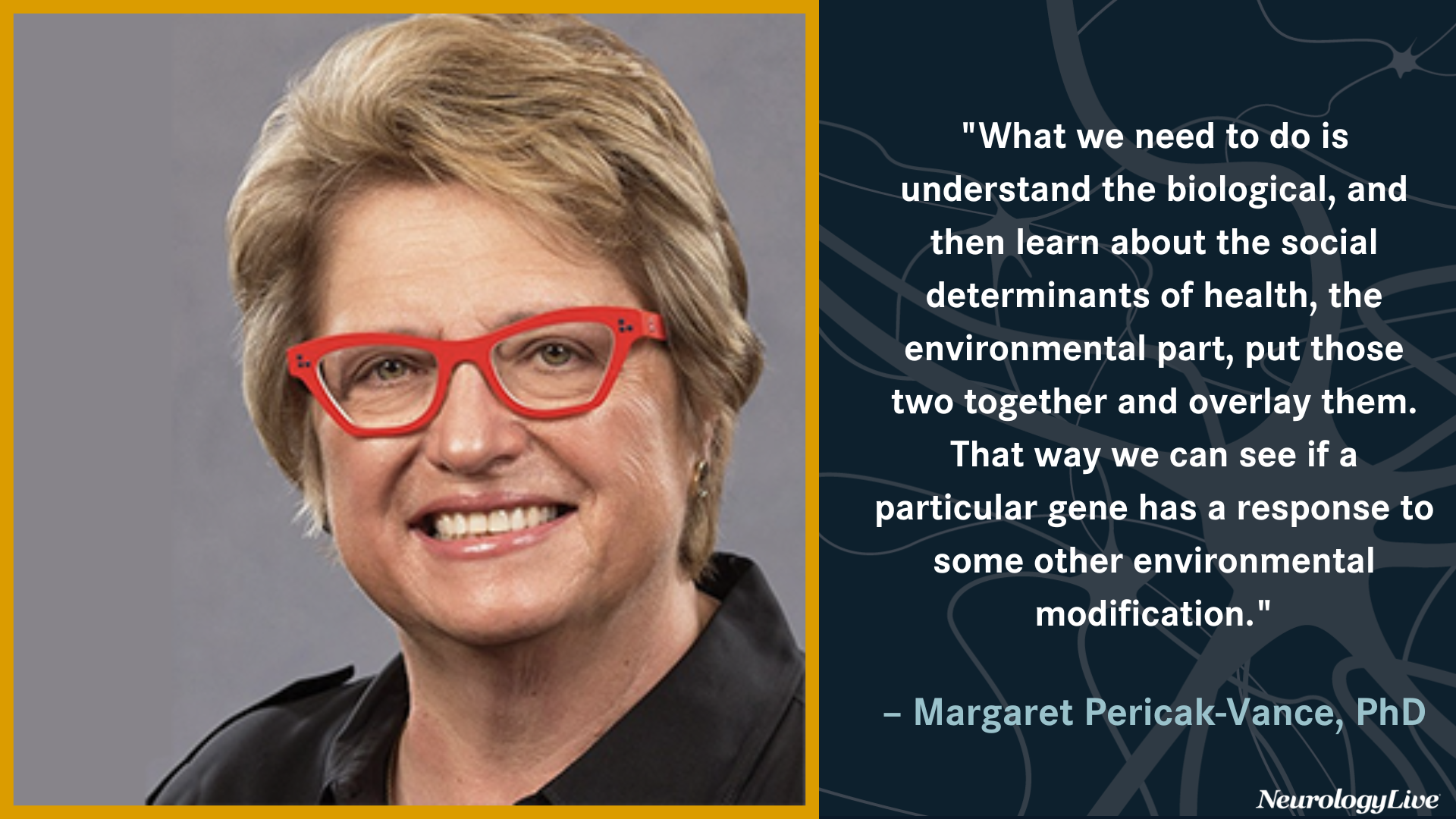 To build a resource that expands on Alzheimer disease (AD) genetic studies to the currently underrepresented African ancestry populations and Hispanic/Latinx groups, the John P. Hussman Institute for Human Genomics at the University of Miami Miller School of Medicine will lead a major 5-year, international, multisite initiative. Through the recruitment, assessment, and genetic analysis of a significantly large cohort of participants of Hispanic/Latinx and African ancestries, clinical, phenotypic, and genetic data, along with social determinants of health factors, will be collected to create a large genomic study databank. Margaret Pericak-Vance, PhD, director of the HIHG, and Dr. John T. Macdonald Foundation Professor of Human Genetics, will oversee the overall efforts of the principal investigators across domestic and international sites. In an interview with NeurologyLive®, Pericak-Vance provided in-depth detail about the study, how it will be carried out, and the goals the investigators are hoping to achieve.

In a population-based cohort of mostly low-income Black and White Americans, individuals had each lifestyle factor scored as either 0 (unhealthy), 1 (intermediate), or 2 (healthy) based on health guidelines, with a composite score summing all scores. At the conclusion of the analysis, those with at least 7 points of the composite score (out of 10) showed a reduced risk compared to those with 0 to 3 points. Similarly, those with 5 to 6 points had a reduced risk as well. Although not necessarily a completely new finding, the study investigators, including senior author Danxia Yu, PhD, assistant professor, Vanderbilt School of Medicine, concluded that the data "support the impact of achievable, healthy lifestyles on preventing ADRD that could potentially benefit everyone to eventually reduce the health burdens and disparities posed by ADRD."

Small positive effects of improved global cognition and apathy were observed in patients with AD on repurposed noradrenergic drugs, according to a recently published meta-analysis. Notably, because of the variability in results across studies, investigators suggested considering several factors before designing future clinical trials, including targeting appropriate patient subgroups and understanding the dose effects of individual drugs and their interactions with other treatments.2

The use of noradrenergic drugs had a small, but significant positive impact on global cognition using the Mini-Mental State Examination (MMSE) or Alzheimer’s Disease Assessment Scale–Cognitive Subscale across 10 studies. The apathy meta-analysis included 8 trials and detected a large positive effect of noradrenergic drugs, although results were limited by potential heterogeneity.

Senior investigator Paresh Malhotra, MA, BMBCh, PhD, FRCP, Department of Brain Sciences, Imperial College London, and colleagues gathered data from 19 randomized controlled trials from 1980 to 2021 to assess the efficacy of drugs with principally noradrenergic action and their effects on cognition and neuropsychiatric symptoms in AD. Of the 19 studies, 6 were judged as “good” quality, 7 as “fair” quality, and 6 “poor” quality.

"The present findings are important because there is no prior consensus on MCIDs for cognitive test outcomes in AD trials, yet FDA specifically highlights that a clinically meaningful improvement on cognitive test scores should be shown before approval of the drug,” senior investigator Sebastian Palmqvist, MD, PhD, associate professor, Lund University, and colleagues, wrote.

Data from a recently published scoping review revealed a diverse cast of sleep outcome measures used in studies of patients with MCI and early dementia; however, this heterogeneity inhibited comparison across studies and clinical groups. Findings also showed that validated questionnaires remain the most used measure despite advances in technology.4

After searching Embase, Medline, Psychinfo, and British Nursing Index databases from inception, the final analysis included 188 studies that contained sleep data on 17,139 unique, diagnostically diverse participants. “Unspecified MCI” was the most common diagnosis among patients with MCI. After the removal of studies comprising unspecified MCI or comprising of groups of mixed causes, the number of studies assessing sleep in well-characterized or delineated MCI diminished substantially and comprised of only 12.1% of participants with MCI.

Data from a population-based cohort of Swedish patients aged 65 years and older showed a modest association between nonalcoholic fatty liver disease (NAFLD) and the development of vascular and nonvascular dementia.5 The presence of comorbid cardiovascular diseases such as stroke or heart disease appeared to exacerbate the impact of NAFLD on dementia risk.

During a median follow-up of 5.5 years, comparisons between patients with NAFLD and individuals of the matched cohort who developed dementia translated to a greater risk for dementia associated with NAFLD. The association between NAFLD and dementia was attenuated after adjusting for metabolic disorders and further reduced but still statistically significant after additionally adjusting for depression, stroke, and heart disease.

Previous studies have suggested that NAFLD is associated with metabolic disorders and additional components of the metabolic syndrome, such as type 2 diabetes or hypertension, which have been associated with a higher risk of dementia. Led by Ying Shang, PhD, MSc, postdoctoral researcher, Karolinska Institutet, this study aimed to see whether NAFLD contributes to dementia risk independent of these factors, as well as examine the role of comorbid cardiovascular disease on these associations.