The adult neurologist at Allegheny Health Network discussed the ever-changing landscape of therapies for myasthenia gravis and shift toward more holistic disease management. 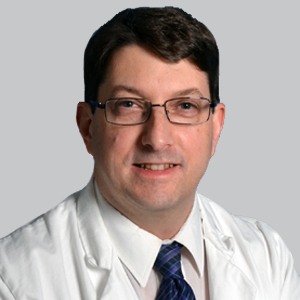 Although the prevalence of myasthenia gravis (MG) has increased over the past century, the associated mortality has declined because of the development of effective treatments. The treatment landscape for MG first started in the 1930s, with the first 2 treatments—physostigmine and neostigmine—followed by the first thymectomy for MG in 1936. Over the years, corticosteroids and plasma exchange were introduced, and other options including cyclophosphamide, azathioprine, and IVIg then followed.

In the past 2 decades, there have been several newer, and highly efficacious options that been FDA approved, including mycophenolate mofetil in 2008, rituximab (Rituxan; Genentech) in 2012, eculizumab (Soliris; Alexion) in 2017, efgartigimod (Vyvgart; Argenx) in 2021, and ravulizumab (Ultomiris; AstraZeneca) in 2022. George Small, MD, an adult neurologist at Allegheny Health Network, believes there has never been a better time to treat patients with MG.

In a new iteration of NeuroVoices, Small provided commentary on the current state of care for the disease, including the significance of the recent therapeutic expansion. He discussed how clinicians like himself are becoming accustomed to the new therapies, and whether there have been challenges using them in clinical settings. Additionally, he provided insider perspective on the ways clinicians are improving quality of life for MG, including nonpharmacological options and a focus on healthy lifestyle choices.

NeurologyLive®: With the newer therapies, what challenges have you seen from a clinical perspective?

George Small, MD: The dosing is really a nonissue. It's proscribed, that is a standard dosing. For Solaris and Ultomiris, an individual has to get immunizations because they are significant immunosuppressives before the entire treatment regimen starts, and that requires counseling of the patient. For Vyvgart, that's not necessary. The intravenous dosing is very simple, for both Vyvgart and Ultomiris. The real bugaboo is getting home care companies to talk to insurance companies and have manpower to be able to administer these drugs, and, frankly, to have them approved. It can take multiple phone calls for that to occur. Since it's very hard to get into physicians’ offices at the current time, partially because of COVID, partially because support staff—providers, nurses, medical assistants, and so forth—many of them are moving into other fields within healthcare, and not working in offices. That can be the challenge, not the dosing. The fact that for both Vyvgart, which is a longer acting version administered once every several months, and Ultomiris dosing, which is already every 8 weeks, that challenge has been obviated because at some point in the next year or so, there should be at least 2 drugs out that do not require you to have 2 visits every month.

Are there any nonpharmacological options or ways to improve quality of life aside from those typical prescribed treatments?

Absolutely. There are adjuncts which I'll get into in a minute. I know Dr. [Nicholas] Silvestri, MD, personally, we're on a first name basis. I was at the same meeting (AANEM) that you attended. I had the distinct pleasure of meeting him about a year ago regarding his discussion of 1 of these therapies. Most of the research at the myasthenia gravis portion of the AANEM meeting had to do with not just saving people's lives and keeping them off ventilators, but also increasing the quality of life. It isn't just people who are aged in their 80s, who may be struck with strokes and whose lives we can save with these drugs, but it's someone who's your age, even my age, who's very active. If I couldn’t speak, if I weren't able to get up in the morning, get out of bed, and eat quickly, I couldn't do my job. You get depressed and then it reaches a vicious cycle.

Other than psychological counseling, the internet has provided a very good source of information. If people are directed there properly by their providers—by someone like Silvestri, or I hope, myself—to get correct information and not misinformation about medications. Suggestions like just staying out of the heat can be helpful and emphasizing that even if people have summer homes in Florida or they want to go to Hawaii, there are certain suggestions or warnings or provide information we should give to people about minimizing certain risks of feeling lousy. One of them is to stay out of significant heat. Another perhaps is to eat certain foods that will not contribute to severe weight gain. Severe weight gain—I'm sure there's literature on it—can increase the risk of having myasthenia gravis exacerbations.

In addition, and separate from just the personal aspect of it, I hope to give a Grand Rounds Lecture in Neurology here at Allegheny regarding the cost savings of treating people correctly for myasthenia gravis. Some of the drugs will always cost quite a bit of money. The question is, if they allow a person to work and function and contribute to the [gross domestic product] of the country, then, in a sense, the cost is obviated by the fact that the person is a useful member of society. There's going to be more and more pressure, that frankly, the pharmaceutical companies—who have absolutely verified treatments for patients—can suggest oruse because they save money in the long run. It's much better to get someone who's struck with myasthenia gravis that's very bad at age 30 and treat them, perhaps with a drug that maybe is in the 5- or 6-figure range per year, but get them working as an executive, get them working as an inventor, get them working as an idea person for IT, and keep them active and not having them be a burden on society.

Although that's not really a personal element, per se, I think the country and the state of Pennsylvania has an interest in studying these [drugs] more. You only get out what you put into things. That's been true for a long time. Steroids are cheap in the short term. In the long term, if you put 70 pounds on someone, they have a heart attack, they may have a stroke and their brain damaged. They're going to be a burden on society from being on disability. I'm no actuary, I'm a doctor. I'm not an economist. But there's no doubt that this research exists now, and even more research is going to prove that. Basically, to keep people happy in their lives where they can deal with moderately severe myasthenia gravis, [you have to ensure] that they get the right information and keep to a proper weight. It's true that you can exercise with myasthenia gravis. You have to keep an eye on it, and there are physical therapists who are specialists at providing suggestions for those types of exercises for MG, and also for avoiding certain things. Perhaps not eating huge meals in the middle of the day so that you're, in a sense, useless the rest of the day, not moving. Eating very small meals can be a very simple thing to suggest, but it can be helpful. Trying to avoid large amounts of carbohydrates because if you're overweight, it just can exacerbate the myasthenia, cause a vicious cycle, and a doctor may want to give you more steroids because they make you feel better in the short term, but in the long term, it's a bad thing for you.

The idea there is that if the government can see that people with MG can go back to work and contribute more so to society, it’s more willing to give back to that community?

I don't see that now. It may exist, but I don't see that. Even when we have denials for authorizations for these newer drugs and even some of the older drugs that are out. Some of the older drugs are not safe long term, and that's been proved. Several shortened versions of the research that was a part of that meeting (AANEM), where people gave lectures, addressed those issues as well. I hope to address those more in my research in the future, and also make it a part of a teaching mechanism for my fellows and our residents to participate in. I think that most residents and fellows are, of course, interested in treating patients and making people feel better, but are not really trained in the economics of medicine, or the long-term psychological well-being of their patients. And I know that Dr. [Sandeep] Rana, MD, the program director of the residency program, is trying to emphasize that, and that is also an impetus of the American College of Graduate Medical Education to do that as well. Not just to have doctors give meds.