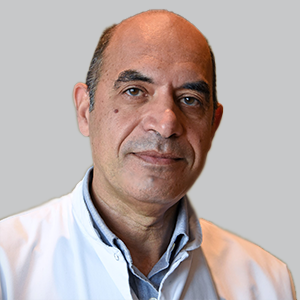 PXT3003 (PHARNEXT SA), a novel fixed-dose synergistic combination of baclofen, naltrexone, and sorbitol, is being evaluated in the pivotal phase 3 PREMIER study (NCT04762758) of patients with Charcot- Marie-Tooth disease type 1a (CMT1A), a neurological disease for which there are no curative or symptomatic medications approved. The international, randomized, double-blind, 2-arm, placebo-controlled trial is taking place in 52 centers across the United States, Canada, Europe, and Israel, with topline data expected to be announced in Q4 2023.1

In PREMIER, approximately 350 patients will be randomly assigned to either PXT3003 or placebo for a 15-month treatment period, with changes in score on the Overall Neuropathy Limitations Scale (ONLS), a measure of functional motor disability, serving as the primary end point (TABLE). Along with safety, there are several secondary end points, including the 10-Meter Walk Test, Patient Global Impression of Severity score, Patient Global Impression of Change score, Charcot-Marie-Tooth Neuropathy Score version 2, and quantified muscular testing for hand grip and bilateral foot dorsiflexion dynamometry. 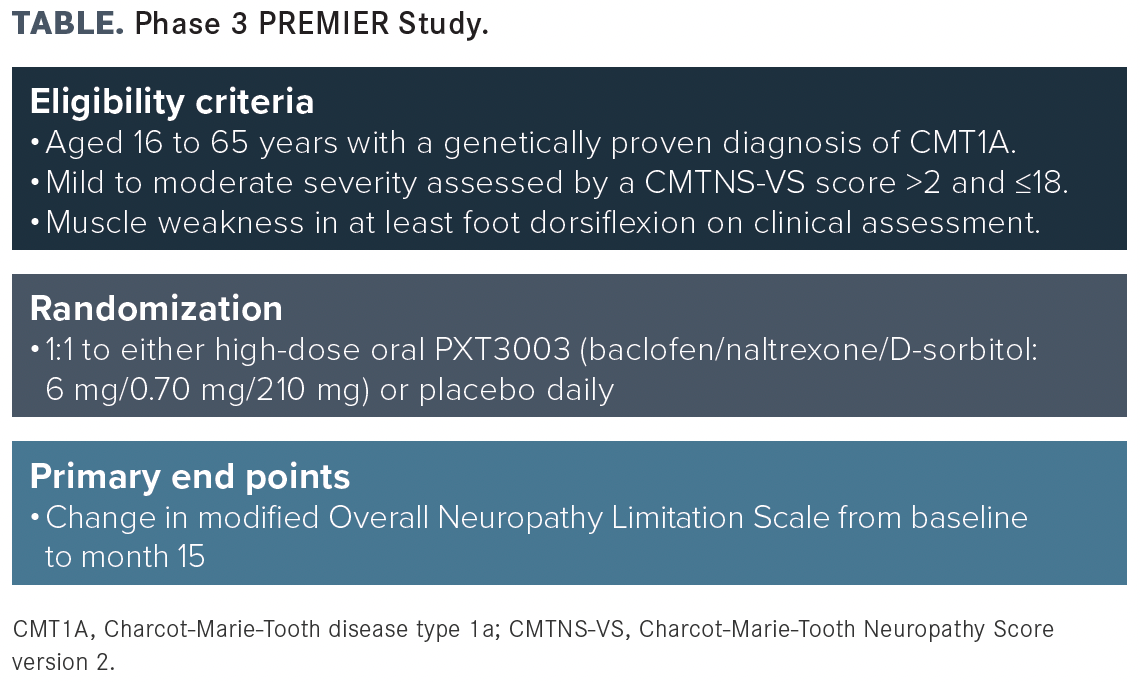 The dose of PXT3003 tested in PREMIER corresponds to the high dose tested in the pivotal phase 3 trial, PLEO-CMT (NCT02579759). That study randomly assigned 323 individuals with mild to moderate CMT1A to either 5 mL of high- or low-dose PXT3003 or placebo, twice daily for up to 15 months, with change in ONLS score at 12 and 15 months as the primary end point. The high-dose treatment arm was prematurely stopped in September 2017 because of an unexpected formulation issue, after which the FDA and European Medicines Agency requested an additional phase 3 study to confirm the efficacy and safety of PXT3003, leading to PREMIER.2

In PLEO-CMT, a revised statistical analysis plan was developed to consider the high amount of missing data because of the discontinuation of patients in this treatment arm. At the trial’s end, both high- and low-dose PXT3003 groups demonstrated decreased scores on the ONLS, indicating disability improvement, whereas those receiving placebo had worsening disability progression. The change in ONLS score was greatest in the high-dose group, for which the mean effect was –0.37 points (P = .008). Between the low-dose and placebo groups, the mean effect was not statistically significant (P = .287).

The open-label extension of that study, PLEO-CMT-FU, had results announced in May 2022, which further confirmed the long-term safety and effectiveness of PXT3003 over a 5-year treatment period. The data readout included patients who had 15 months in PLEO-CMT, followed by 9 months in period 1 of PLEO-CMT-FU and 36 months of period 2 in the same extension study.3

After showing a change of –0.11 in ONLS score at 15 months, patients in the high-dose PXT3003 group had an additional mean improvement of –0.17 in the following 45 months. The low-dose group didn’t see as much efficacy signal, but still had improvements of –0.17 in ONLS score in the final 45 months of treatment, following a –0.05 change seen at the 15-month mark. Notably, among patients receiving placebo in the original 15-week period who then switched to low-dose or high-dose PXT3003 during period 1 and high dose during period 2, the mean change in ONLS score was –0.11 in the final 45 months compared with a worsening change of 0.17 in the original 15-week treatment period.

Following the data announcement, Shahram Attarian, MD, PhD, head of the Neuromuscular Diseases Service and ALS Department at Timone Hospital in Marseilles, France, said in a statement that “as an investigator involved since the beginning in the clinical development of PXT3003 in CMT1A, I find these long-term safety and efficacy data very encouraging. Being able to stabilize, or even improve, patients with CMT1A is an extremely worthwhile goal, particularly as these individuals will inevitably decline following the long-term natural course of the disease with the currently available standard of care.”3 Attarian, who served as lead investigator for PLEO-CMT and PLEO-CMT-FU, currently serves as lead investigator of the PREMIER trial.