The investigational candidate is the subject of a phase 3 study assessing efficacy and safety in adults with hATTR amyloidosis with transthyretin mutation.
By: Jenna Payesko
Published: August 19, 2019
Vutrisiran (ALNYLAM), an investigational therapeutic targeting transthyretin (TTR), has the potential to be a once-quarterly, low-volume, subcutaneously administered RNA interference medication for the treatment of TTR-mediated amyloidosis.

The investigational candidate, formerly known as ALN-TTRsc02, is the subject of HELIOS-A, a phase 3 trial (NCT03759379) assessing the efficacy and safety of vutrisiran for 9 months in 160 adults aged 18 to 85 years with hereditary TTR-mediated (hATTR) amyloidosis followed by an 18-month treatment extension period. Patients must have an adequate neurologic impairment score, an adequate polyneuropathy disability score, and an adequate Karnofsky Performance status.

“What’s exciting is that we’ve been able to use this newer version of our RNA interference technology to develop a molecule that can be given [as a] 25 mg injection subcutaneously quarterly, and we see about an 80% knockdown of transthyretin that’s produced in the liver,” Pushkal Garg, MD, chief medical officer of Alnylam, told NeurologyLiveTM in an interview.

FIGURE. Phase 3 HELIOS-A Trial Evaluating the Safety and Efficacy of Vutrisiran in Adults With hATTR Amyloidosis 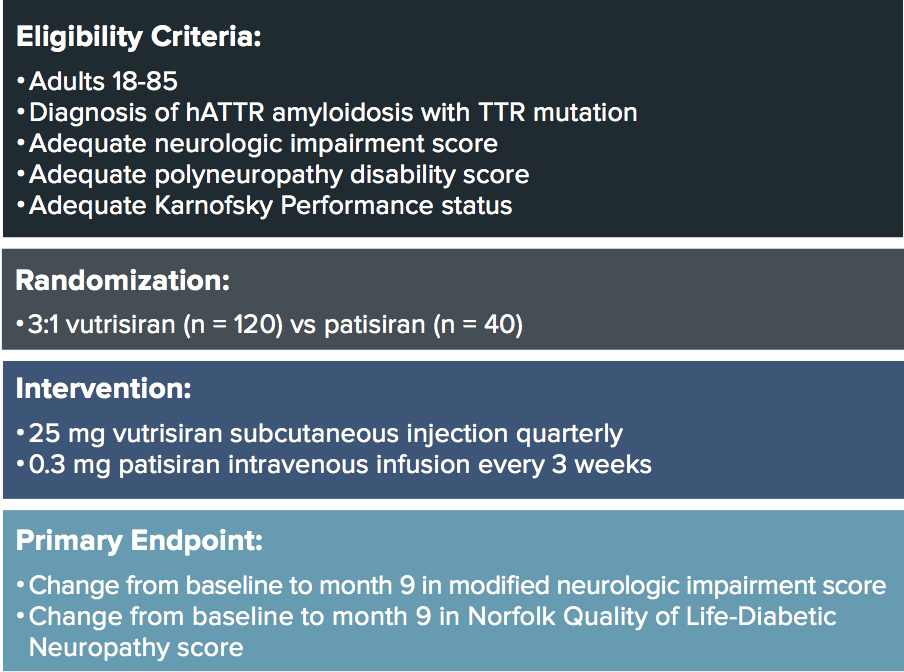 The study uses the placebo arm of the APOLLO study (NCT01960348) as an external comparator for the co-primary and most other eficacy end points because the placebo participants progressed fairly rapidly in the 18 months of the study.

“We’re trying to really address the same population of patients that we did with patisiran in the APOLLO study but use this newer medicine, which we think would be much more convenient for patients to take and allow them to adhere to their therapy as well,” Garg explained.

The primary end points are the change from baseline in the modifed Neurological Impairment Scale + 7 and the Norfolk Quality of Life Questionnaire-Diabetic Neuropathy total score at month 9. Secondary measures are the change in the timed 10-meter walk test, modi ed body mass index, Rasch-built Overall Disability Scale, and the reduction in serum TTR levels, all at months 9 and 18, as well as frequency of all-cause death and/or hospitalization in all participants and those with cardiac involvement until month 18.

An earlier phase 1 clinical study (NCT02797847) determined the safety, tolerability, pharmacokinetics, and pharmacodynamics of vutrisiran in 80 healthy patients.1 Participants were randomly assigned 6:2 to receive a single dose of vutrisiran or placebo by subcutaneous injection. Investigators discovered that a single 25-mg dose of vutrisiran reduced the production of the TTR protein by up to 98.4% for more than 4 months, and a 50-mg dose reduced it by 86.2%.

Garg explained that vutrisiran’s safety pro le showed that the therapy was well tolerated. In the phase 1 study, there were no serious adverse events (AEs) and no discontinuations due to AEs. All the AEs reported were of mild or moderate severity. In 8 subjects, there were 14 reported AEs that were considered possibly treatment related; these included injection site erythema, injection site pain, injection site bruising, rhinorrhea, pruritus, cough, nausea, fatigue, genital rash, and abdominal pain.1

HELIOS-A is currently recruiting study participants, and data from both the trial and the extension period are expected to be nalized in May 2024. In June 2018, the FDA granted orphan drug designation to vutrisiran.

“If we can recapitulate the e cacy pro le of patisiran in something that has the potential to not only halt but even reverse some of the polyneuropathy manifestations of the disease as was reported in the New England Journal of Medicine with patisiran, that would be fantastic,” Garg said, “and to do that with a once-a-quarter, low-volume SC [subcutaneous] drug, I think, would be a therapeutic advance for patients. REFERENCE
1. Taubel J, Zimmermann T, Karsten V, et al. Phase 1 Study of ALN-TTRsc02, a Subcutaneously Administered Investigational RNAi Therapeutic for the Treatment of Transthyretin-Mediated Amyloidosis. alnylam.com/wp-content/uploads/2018/03/10.-TTR-SCO2_FINAL.pdf. Accessed May 20, 2019.
Forgot password?