Marisa McGinley, DO, from the Mellen Center for Multiple Sclerosis Treatment and Research at Cleveland Clinic, offered her insight into the manual dexterity test and the need to better prognosticate dexterity issues. 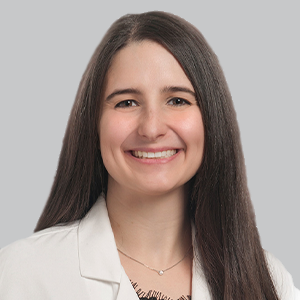 Multiple sclerosis (MS), as many specialists are aware, can often result in limb-related challenges for patients. These can range from issues with gait or the need for a wheelchair to impairment in hand and finger dexterity and strength.

For upper-extremity function, oftentimes, the 9-hole peg test (9HPT) is utilized to assess function, but it is limited in what information it can provide physicians. Additionally, due to the importance of walking in patient’s daily lives, the focus for many individuals may be on restoring or retaining their ability to do so. At the 2021 American Academy of Neurology (AAN) Annual Meeting, April 17-22, Marisa McGinley, DO, staff neurologist, Mellen Center for Multiple Sclerosis Treatment and Research, Cleveland Clinic, presented data from a recent assessment she and colleagues conducted with the Manual Dexterity Test (MDT), a digital, iPad adaptation of the traditional 9HPT for patients with MS.

She noted that the findings revealed that some of these novel outcome measures from the MDT were more sensitive to change over time. Specifically, it can produce longitudinal evaluation of novel upper extremity biomechanical outcomes and prediction of change. These more multi-dimensional outcomes might improve the physician’s ability to detect the progression of upper extremity impairment in patients with MS.

In this interview with NeurologyLive, McGinley offered her perspective on the current assessments of progression in this patient population and shared how improving its prognostication and measurement can improve not only care but clinical trials as well.

NeurologyLive: Could you provide an overview of this work that was presented at AAN?

Marisa McGinley, DO: In our traditional intake for MS patients, every time they come into the office, we have them do a battery of assessments on an iPad. What that includes is sort of adaptations of the traditional outcome measures of the MSS Functional Composite, or MSFC, and then it also includes patient-reported outcomes and some other disease characteristics. One of the components of that is an adaptation of the 9HPT. This presentation is specifically focused on the sort of ways to look at the data that we get from the digital adaptation of the 9HPT—that's called the manual dexterity test, or MDT.

What was revealed through your experience using this test?

There have been multiple validation studies of just the traditional outcome measure that we get from the digital adaptation of the 9HPT, so it is just as reliable. We get the same information from it. This study really was trying to take it one step further, and look at what the whole point is of doing a digital version of any of these tests that we do?

One is they're self-administered. Patients can come into the office and do this, and so we're more consistently obtaining a 9HPT score from our patients. But then, the bigger picture—and more what this abstract was about—is that we can get richer data from a digital assessment because, with the traditional assessment, you just get how long it takes the patient, which we know from using the 9HPT over time with patients with MS. Once you hit certain thresholds or certain change measures, it's meaningful, and you can see the patients are slower if they have impairment, and you can see that they get slower over time if there's progression. But you can't really characterize what the problem is with the dexterity.

The whole point of an upper extremity test is that we're trying to gauge a dexterity or upper extremity issue. But in MS, that can occur for a lot of reasons. Patients can be weak, or they can have a cerebellar ataxia problem. So, the whole point of the biomechanical breakdown of it is to really understand that impairment better in a patient. That's really what this study looked at: how can we break that down to understand it? Is it slow speed? Is it the patient's dropping the peg a lot? Is it that they have trouble getting the peg into the holes? We really wanted to understand that function a little bit better and see if that could characterize the dysfunction that patients are having a little better.

There are also the situations where patients may perform in the normal range, but still have an issue, that they compensate for well. The long-term hope with this is that we can capture subtle disabilities or issues with patients that are overcoming it to an extent, and really understand that upper extremity function in a more fine-tuned manner.

How important is that ability to prognosticate patient progression with dexterity, and how useful of a tool is the MDT for that?

We're not there yet. But I think that would be an advantage. What we found in this study is that some of these novel outcome measures were more sensitive to change. In MS, one of the big gaps in the field is the ability to detect progression. The main way that we look at progression in MS right now was with the Expanded Disability Status Scale, or EDSS. That's the kind of classic outcome measure, and that is heavily weighted towards lower extremity function and walking. But for MS patients, that's not always their primary issue. Then, when it gets to the point of walking issues, it's a pretty obvious progression.

Ideally, we'd want to be able to detect progression sooner, and so that will be helpful in clinical practice, but also in clinical trials. Really, there's a huge need to develop therapeutics for progressive forms of the disease, and so we really need to kind of reimagine how we measure progression in MS patients and understand that change better. Then we could truly, objectively quantify that a little bit better for patients. And again, we need to find ways to quantify progression that isn't just walking disability, too. I think that these sorts of these measures have the potential to capture that a little bit differently, and hopefully better.

For the clinical community who may look at these results, what are the takeaways?

One takeaway is that, clearly, monitoring upper extremity function is still of value in patients, and that it is important to think about our patients comprehensively. So again, I think that these results show that doing the test is helpful, and then doing it in a digital way is helpful because it's very practical, from a clinical standpoint, that we can capture this when a patient can administer it. Obviously, this is an in-clinic version, right? We're doing it with an iPad. But I think the wider community needs to really understand that. We're all trying to think about ways that we can transcend even the clinical measurements, and so, digital technologies have the potential for us to help our patients monitor their function both in and out of the clinic.

This study really shows the value of digital assessments, and that they have the potential to a monitor our patients better and more consistently, too. Then, ultimately, if we could translate this outside of our clinic, we'll be able to see what's going on with our patients in-between visits. I think that with most MS clinicians, we're not seeing our patients every month. Most of them are doing 6- to 12-month visits unless something's going on. Especially, we're thinking about progression, and we don't want to be surprised when the patient comes in at 6 or 12 months and they look worse. Ideally, we'd want to be able to capture that sooner and potentially intervene sooner.

Is this something that you could see being developed for patients to sort of track themselves on their own?

This specific one would be hard because the way that we did this was a specialized version that we put on an iPad. It's always possible that you could send that home with patients, but I think the reality is that this study really shows that we should continue to look at upper extremity function for progression and that we want to break it down more than just the kind of traditional outcome measures. Ultimately, here at Cleveland Clinic, we're working on several different adaptations for the phone that patients could do in-between visits. I think that this specific modality used in the abstract likely won't translate into the home situation, but it does serve as a good foundation for developing technologies that will be.