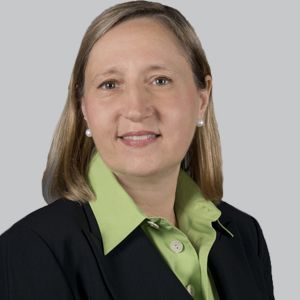 AS THE MIGRAINE TREATMENT TOOLBOX has expanded in recent years, the most notable option has been the introduction of the calcitonin gene-related peptide (CGRP) inhibitors. Biohaven’s third-generation, highly soluble small molecule zavegepant may be next to join that list of therapies.

In early April, the company announced that the first patient in a phase 2/3 clinical trial (NCT04804033) had been dosed with oral zavegepant.1 The pivotal double-blind, placebo-controlled study will enroll approximately 2900 participants to evaluate the safety and efficacy of 100-mg and 200-mg zavegepant over a 12-week study period.

“It is designed to be able to provide the FDA with what it will require for approval if we are ultimately successful,” Elyse Stock, MD, chief medical officer, Biohaven, told NeurologyLive®.

Stock noted that the company hopes to complete the study in the second half of 2022 and did not anticipate any interim data readouts. Rimegepant (Nurtec ODT), which was approved in February 2020 for the acute treatment of migraine in adult patients, was Biohaven’s first approved migraine medication and was crucial in better constructing the zavegepant clinical trial process.2 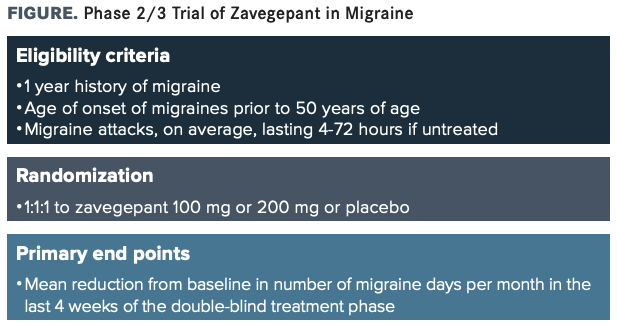 “The whole clinical trial process with rimegepant made this easier. There clearly is some guidance that we, and others, have gotten from the regulatory agencies across the globe on how to run these programs so that, if we’re successful and have a positive study, we get an approval,” Stock said.

Rimegepant, another CGRP-targeted treatment, was granted approval based on the results from 2 clinical trials: the phase 3 Study 303 (NCT03461757) and the long-term, open-label safety trial, Study 201 (NCT03266588). In its clinical development, more than 3100 patients were treated with more than 113,000 doses of the therapy.

As for zavegepant, Biohaven announced topline results from another phase 2/3 clinical trial (BHV3500-201; NCT03872453) evaluating the efficacy and tolerability of its intranasal form in 5-mg, 10-mg, and 20-mg doses vs placebo in 1673 patients for the acute treatment of migraine. At 2 hours, treatment with a single dose of zavegepant 10 mg or 20 mg showed statistically superior results to placebo on the coprimary end points of pain freedom and freedom from the most bothersome symptom (MBS; photophobia, phonophobia, or nausea).3

Across a number of secondary end points, the treatment continued to show its early activity (nominal P <.05). The treatment also had rapid onset with pain relief at 15 minutes (10 and 20 mg), with patients returning to normal function as early as 30 minutes in the 20-mg dose group. Therapeutic benefits on both pain relief and return to normal function at 2 hours were observed in both the 10-mg and 20-mg dose groups.

Zavegepant, which was known at the time as vazegepant, eventually had its named revised by the World Health Organization and was accepted by the United States Adopted Names (USAN) Council for use in the US.

Stock noted that there are a number of benefits that both oral and intranasal zavegepant can bring to patients. Discussing intranasal zavegepant, she told NeurologyLive®, “It may be more appropriate for someone who is getting a migraine all of a sudden and will need something that they will rapidly respond to and where they don’t want to take anything by mouth at all.”

She said there are a number of other disorders outside the migraine space that could benefit from CGRP. She explained that the company is looking into respiratory, dermatologic, and infectious disease spaces. Biohaven currently has ongoing studies involving patients with COVID-19 as well as psoriasis and is planning to start another that will include patients with asthma.