A Case of Cerebral Amyloid Angiopathy-Related Inflammation With Pathologic Features

A 71-year-old woman presented to the emergency department with subacute headaches and altered behavior that was initially attributed to emotional distress. What did the tests show? 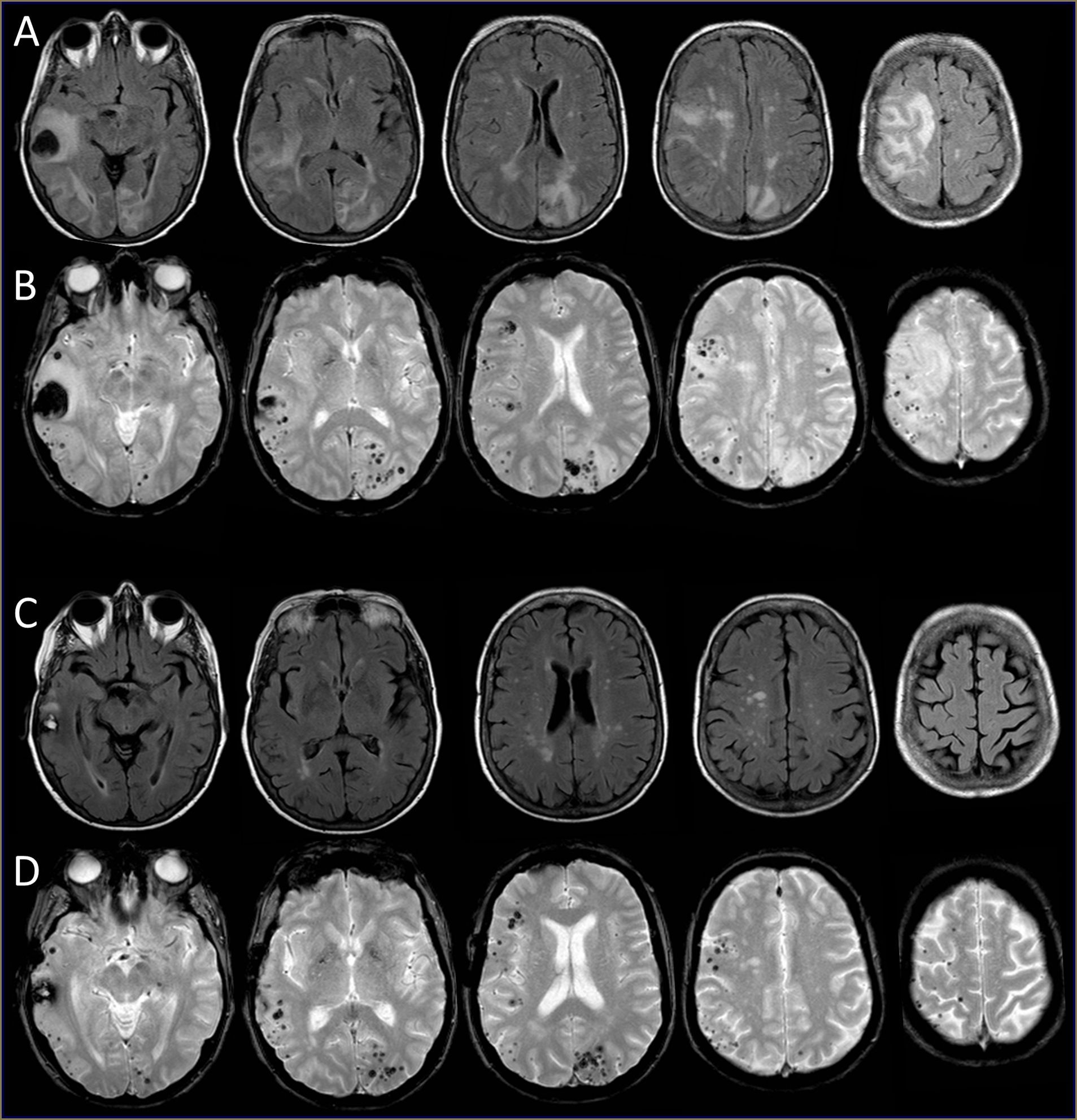 A 71-year-old woman presented to the emergency department with subacute headaches and altered behavior, such as leaving the shower running while fully dressed or not responding to calls, which was initially attributed to emotional stress related to her husband’s illness. She later developed left-sided weakness. A CT head showed a 2.2 cm3 intracerebral hemorrhage in the right parietal lobe. She was hypertensive, alert but confused, and minimally oriented, with impaired attention and concentration. She had left face and body weakness of moderate degree with sensory neglect of the left side and Babinski sign bilaterally.

Numerous cerebral microhemorrhages were seen on gradient echo brain MRI: one larger parietal hemorrhage, with the hemorrhages located primarily within large areas of hyperintense signal on T2 and FLAIR, with mass effect bilaterally suggestive of edema. She was homozygous for the APOE-Îµ4 allele. Other laboratory studies were unremarkable.

She was treated with intravenous methylprednisolone for presumed cerebral amyloid angiopathy-related inflammation and underwent a brain biopsy to confirm the diagnosis. She improved significantly with corticosteroid treatment, but remained mildly confused. She was transferred to inpatient rehabilitation and returned home largely independent a week later. Repeat MRI scans demonstrated near-complete resolution of the mass effect and T2-hyperintense lesions, while the microhemorrhagic changes were largely unchanged, as is typical (Figure 1).1,2

The brain biopsy included tissue from the right temporal artery, temporal lobe dura, and temporal cortex (Figure 2). There was increased perivascular cellularity without frank vasculitis. The parenchyma also had mildly increased cellularity with dysplastic-appearing cells and occasional mitotic figures. Ki67 staining confirmed an elevated mitotic index and GFAP staining was suggestive of gliosis, leading to a preliminary diagnosis of grade 3 anaplastic astrocytoma. The blood vessel walls stained intensely for Î²-amyloid by immunohistochemistry. In view of the arteriolar Î²-amyloid staining, classic neuroimaging, and a clinical history of long-term resolution with treatment with corticosteroids, the diagnosis was revised to cerebral amyloid angiopathy-related inflammation.

In retrospect, examination of consecutive tissue sections demonstrated that Ki67 positive cells were consistently activated microglia and IDH1 staining was negative (not shown), which led us to conclude that the dysplastic changes were due to exuberant inflammation. Her headaches, encephalopathy, weakness, and neglect improved markedly over several days. There was nearly complete resolution of the MRI findings 6 weeks after presentation. Over 3 years after presentation, she remained clinically and radiographically stable, with the exception of slowly progressive memory impairment. She has not developed any evidence of malignancy. She was still living at home at the time of her most recent reevaluation.

On MRI, there can be symmetric or asymmetric, patchy or confluent T2-hyperintense lesions in the subcortical white matter, and less commonly in the overlying gray matter, typically associated with numerous microhemorrhages at the junction of the gray and white matter in affected areas5; homozygous ApoE-Îµ4 genotype is overrepresented.3 The underlying pathophysiology is likely due to an autoimmune response to amyloid peptide deposition, and the pathology is characterized by intense T-cell infiltration of the perivascular space with variable granulomatous changes.6,7 While most patients respond favorably to immunosuppression, a minority have multimodal or progressive disease. The findings are similar to those occurring in patients treated with anti-amyloid monoclonal antibodies, ie, amyloid related imaging abnormalities (ARIA).8

The most striking aspect of this case was the appearance of the biopsy specimen that contrasted with the patient’s clinical course. CAARI does not usually affect the brain uniformly, so biopsies may miss key pathology and the classic inflammatory features may be evanescent, particularly in the context of active immunomodulatory treatment. Mitotically active microglia/macrophages and atypical astrocytes (Creutzfeldt cells) are often present in reactive conditions, particularly inflammatory demyelination, and may appear dysplastic, mimicking the findings in a malignancy.9

This case was typical of CAARI from a clinical and neuroimaging perspective, which led to a high index of suspicion, despite the pathological findings that raised the initial question of a brain tumor. Because a CNS malignancy is the most likely alternative diagnosis in patients with CAARI and the clinical management would change so dramatically, this case suggests particular attention should be paid to longitudinal neuroimaging in the diagnosis and treatment of CAARI, whether a biopsy is obtained.