Goals of and Recommended Approach for Acute Treatment

EP: 2.Goals of and Recommended Approach for Acute Treatment

EP: 5.The Importance of Patient Communication

EP: 10.The Role of Developing Agents in Acute Migraine Paradigm

A discussion on the goals of treatment and the recommended approach for selecting, combining and sequencing acute therapies.

Amaal J. Starling, MD: When you look at the clinical trials, the primary end points are 2-hour pain freedom, and that’s what’s defined by the FDA for our acute clinical trials. However, when I’m in the clinic sitting in front of a patient, the goal of acute treatment—and that’s what’s most important when I’m in the clinic with the patient—is what I can do for the patient to help them return to normal life as soon as possible without having adverse effects. That includes relieving not only their pain but also their other symptoms that go along with that migraine attack. I tell patients that I want them to be able to take a medication and, within about 2 hours, be back to their normal selves, so that they’re able to get back to what they need to do, whether it’s being a parent taking care of their kids, going back to school and being in class, or getting back to work. That’s a goal that I define for my patients.

There are different kinds of clinical profiles in the patients I see in clinic. In my clinic population, I’m practicing in a tertiary headache clinic. Many of my patients have not only chronic migraine but chronic daily pain—they have headache on a daily basis. For them and their acute migraine therapy, the goal may not be resolution of head pain, but they always have a certain amount of baseline pain, and then they’ll have headache exacerbations. For them the goal is to get them back to their baseline, get them out of that exacerbation of head pain. However, I do have some patients who have more of an episodic migraine pattern—in general, they have no pain on the majority of their days. For them, the goal is different. The goal is for them to be back to their baseline, and their baseline is no symptoms of migraine, no pain, no other migraine-associated symptoms like sensitivity to light, sound, etc.

As far as prescribing acute therapies, by the time they get to even a neurologist—honestly, for patients with headache disorders, even before they’re diagnosed with migraines perhaps—they’ve already tried some of the more simple analgesics or even combination analgesics. Things like over-the-counter medications like Tylenol or nonsteroidal anti-inflammatory drugs [NSAIDs], such as ibuprofen or naproxen, or the combination analgesics such as medications that have an NSAID or aspirin plus caffeine, like the name brand Excedrin. They may have already tried those even before they’ve received a diagnosis of migraine or if they fit a diagnosis of migraine.

By the time they get to the primary care doctor, they may have been prescribed a triptan medication, but sometimes that triptan may have not been given to them at an optimized dose. You want to make sure that when you, as a neurologist, receive that patient and they mention to you, “Oh, yes, I was given sumatriptan, or Imitrex, or Maxalt,” that you dig a little further and ask them about the dose that they were given. Because sumatriptan at 25 mg may not have done anything, and that may not give you information about what an appropriate dose of sumatriptan may have done.

In the past, if they have used a triptan medication but they’ve experienced a lot of nausea or vomiting, and it was an oral triptan, you may want to use a different formulation, such as a nasal spray formulation or an injection formulation. If someone has tried 1 or 2 triptan medications and they have not had a good response to it, maybe it’s been completely ineffective or they’ve had a significant adverse effect. These things do occur in about 30% to 40% of our migraine patient population, based on studies. In those patients we now have other options. We have medications like lasmiditan. We have gepant medications like ubrogepant, as well as rimegepant. We also have multiple devices that can be used for the acute treatment of migraine. Those are other things that we can explore.

There are patients who have contraindications to triptan medications. However, before they have the contraindication, maybe a triptan worked perfectly. For example, I can recall a patient of mine for whom eletriptan was great. It was a wonderful medication for them, but they came to me and they were scared to report that they had recently been diagnosed with a myocardial infarction. They knew that because of that I would no longer be able to prescribe their eletriptan, but they were scared because they didn’t know what they were going to do for their next migraine attack.

Fortunately, they do have other options now. Lasmiditan still works on the serotonin receptor, very similar to triptan medications. Fortunately, it works only on the 5-HT1F receptor, not on the 5-HT1B receptor, which is the 1 that is located on the blood vessels in the heart and the brain. It would still be OK in individuals who have a history of stroke and heart attack. This was a patient for whom I was able to prescribe lasmiditan.

Unknown block type "hrtag", specify a component for it in the `components.types` prop
Related Videos
View All
Related Content 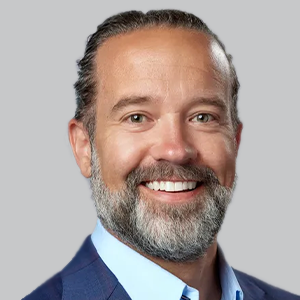