An update on responsive neurostimulation, the only implantable, closed-loop device approved for treating seizures. 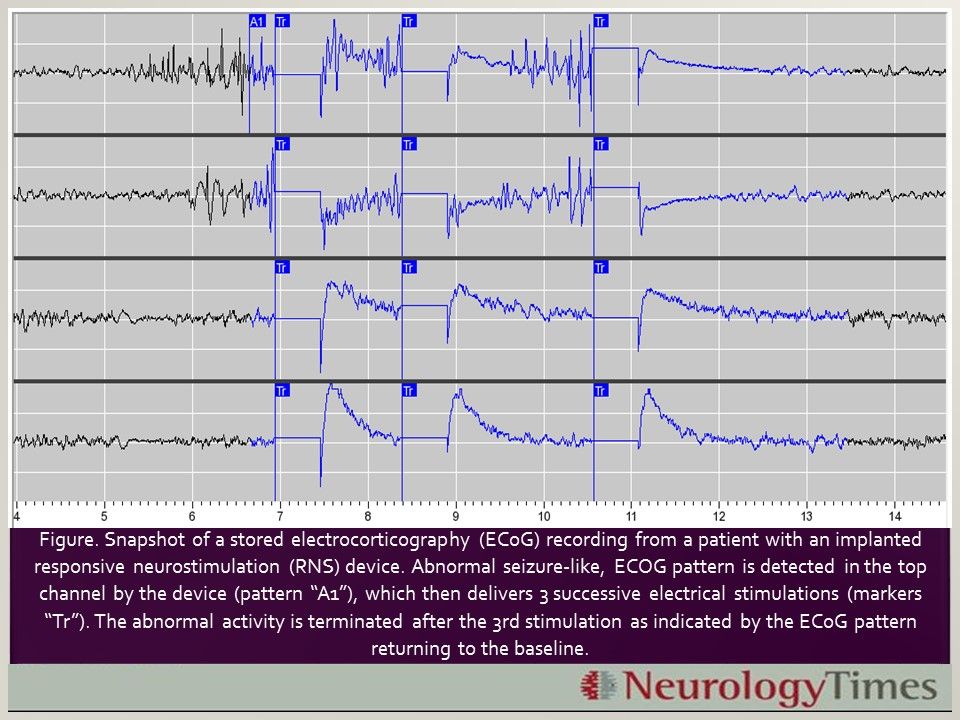 Dr Modur is Director of Seton Comprehensive Epilepsy Program and Associate Professor of Neurology, Dell Medical School, The University of Texas at Austin.

Responsive neurostimulation (RNS) refers to a novel method of controlling seizures by delivering electrical stimulations to the seizure focus from an implanted device. The RNS device (NeuroPace Inc., Mountain View, CA) received FDA approval in 2013. It is indicated as an adjunctive therapy for seizure control in adults aged 18 years or older with frequent (≥ 3/mos) or disabling partial seizures (focal motor, complex partial and/or secondarily generalized seizures) arising from 1 or 2 foci that are refractory to 2 or more antiepileptic medications.

RNS is a closed-loop device, designed to be triggered to deliver therapy only when the desired, abnormal electrocorticographic (ECoG) pattern of interest (eg, seizure) occurs, which is accomplished in 3 main steps:

1. The ECoG activity is continuously monitored and recorded by the implanted depth or subdural electrodes near the seizure focus.

2. The device detects abnormal seizure-like patterns from these recordings using algorithms based on programmable parameters.

3. The device delivers electrical stimulations to the seizure focus in response to the detected abnormal pattern at preset current and charge density with the goal of terminating the pattern (Figure).

A battery-operated, microprocessor-enabled neurostimulator device, placed under the skull, performs these tasks. Using a remote (hand-held wand connected to a laptop) and network connection, the patient can periodically upload the ECoG data to a cloud-based server, which is accessible to the physician. During subsequent follow-up visits, the physician analyzes the ECoG data and reprograms the device with appropriate detection and treatment parameters that are tailored to the specific seizure signatures of the patient. The overall goal is to terminate the seizure as soon as it begins, thereby offering palliative therapy for seizures.

RNS has shown incremental efficacy in controlling seizures. In the pivotal trial (n = 191), the mean seizure reduction over a 3-month period was 38% in the RNS treatment group and 17% in the sham group compared with baseline (ie, preimplant).1 In the open-label extension phase (n = 175), the median seizure reduction over 2 years increased to 53% compared with baseline.2

More recent data on long-term efficacy show that the median seizure reduction increased to 66% by 6 years.3 Over the 6 years of follow-up, no one was seizure-free for the entire period, but 13% experienced at least one period of seizure freedom lasting 1 year or longer. Quality of life improved at 1 year and the improvement was maintained at 5 years.

Comparing RNS to other types of brain stimulation

RNS is an alternative to vagus nerve stimulation (VNS) and deep brain stimulation (DBS) to control seizures. Unlike RNS, both VNS and DBS are open-loop devices that are programmed to deliver electrical therapy at preset intervals that are not necessarily timed to the occurrence of abnormal EEG activity. VNS (Cyberonics/LivaNova, Houston TX), which involves stimulation of the left vagus nerve in the neck, received FDA approval over 20 years ago for the treatment of drug-resistant focal epilepsy in persons aged over 12 years. In the pivotal trials, the mean seizure reduction with VNS was 25% to 28% (compared with baseline), but it increased to 44% at 2 years.4-6

Subsequent clinical experience suggests that the VNS is also beneficial for treating intractable seizures in children and in Lennox-Gastaut syndrome as noted in a recent practice parameter.7

More recently, a large clinical trial of a DBS device (Medtronic, Minneapolis, MN), involving the stimulation of the anterior nucleus of thalamus, was completed. The device is not approved by the FDA although it is approved in Europe. Data from the DBS pivotal trial showed a 29% greater seizure reduction in the stimulated group compared with controls.8 Long-term data from the trial showed improved efficacy over time with a 41% median seizure reduction at 1 year and 69% at 5 years.9

A VNS implant is not necessarily a contraindication although such patients were excluded in the clinical trial. As MRI cannot be done with RNS implants, anyone with a neurological condition that requires future MRI is not a candidate for RNS. It is also important to have reliable, cooperative, and motivated patients and caregivers because the device data need to be uploaded periodically to the server using the remote monitor.

RNS implantation is a neurosurgical procedure and consists of placing the electrodes intracranially and the device within the skull (typically the parietal bone). Each electrode consists of 4 contacts and can be placed within the brain tissue (as a depth electrode) or subdurally on the brain surface (as a subdural electrode). The electrodes exit through burr holes and connect to the device. Once implanted, the device is completely hidden inside the scalp, flush with the skull. Postoperative recovery is generally quick and patients are discharged within a few days. Subsequent battery replacements can be done relatively easily. The procedure is reversible, and the device and electrodes can be explanted if necessary.

RNS is designed to work best when the electrodes are implanted in close proximity to the seizure focus (ie, seizure onset zone). In temporal lobe epilepsy (eg, due to mesial temporal sclerosis), the electrode placement is relatively straightforward and consists of inserting a depth electrode stereotactically into the hippocampus via an occipital burr hole. On the other hand, in neocortical extratemporal epilepsy, an intraoperative electrocorticography or chronic intracranial monitoring may be required to localize the seizure onset areas before placing the RNS electrodes.

After implantation, the device is tested in the operating room to ensure that the ECoG signals are being recorded properly. The device is turned on to detect seizure-like ECoG patterns based on generic settings while the therapy remains disabled. Before discharge, the patient and caregivers are trained on using the remote monitor to upload the data.

After the patient has had an adequate number of seizures or seizure-like ECoG patterns, the data is analyzed by the team and the therapy is enabled. However, the stimulations delivered by the device are not perceived by the patient. The parameters can be changed over time to optimize the detection if the desired abnormal ECoG patterns are not adequately sensed by the device.

These parameters are patient-specific as the electrical signatures of seizures vary from patient to patient. Once the detection parameters are optimized, the focus shifts to optimizing the electrical stimulation therapy, which may involve changing one or more parameters including current intensity, stimulus frequency, pulse width, and stimulus duration. This is an iterative process carried out over multiple follow-up visits.

It is important to advise the patients that it might take several months after the implant to achieve adequate seizure control. Sometimes, patients become seizure-free soon after the implantation. This is known as the “implant effect,” and is transient and persists for a few weeks. The device allows limits to be set on therapy so the patient does not receive excessive stimulation. However, it is important to keep in mind that frequent detection and stimulation can reduce battery life. The battery can be expected to last a few years, but battery life is highly variable and depends on the settings. The device provides clear warnings regarding battery life, and when needed, battery replacement is a relatively simple procedure.

RNS is the only implantable, closed-loop device approved for treating seizures. It is intended for palliative treatment for patients with intractable epilepsy with seizure foci close to the eloquent cortex or bihemispheric seizure foci (such as bilateral temporal lobe epilepsy). Evidence suggests continued favorable efficacy, tolerability, and safety over the long term. While further studies are needed to elucidate the mechanism of action and determine the optimal parameters of stimulation, RNS clearly represents a major milestone in the treatment of epilepsy.