Are his symptoms related to a fall that occurred 2 years earlier at work? 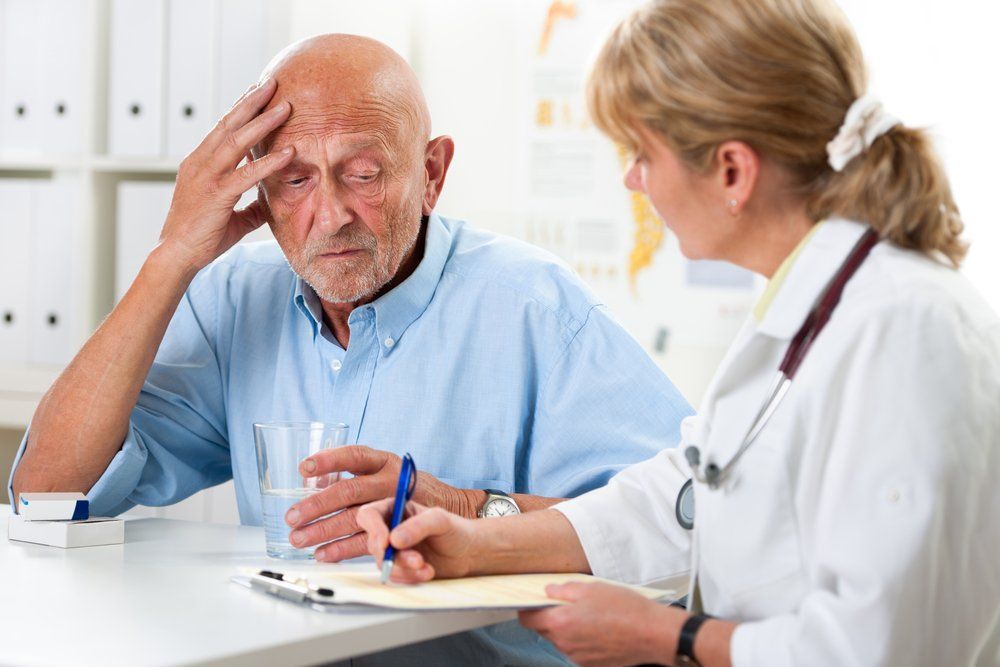 A 62-year-old man fell at work 2 years earlier and has been intermittently dizzy ever since his fall. He feels lightheaded, “as if he is going to fall,” several times a day but has never fallen except for the event 2 years ago. He says that he usually feels off balance and has to hold on to the railing when going up and down stairs. He also feels off balance whenever he closes his eyes. He does not ever feel that he might faint, and he does not feel that the room is spinning.

He works as a supervisor at a large warehouse. He recalls that when he fell, he slipped on the wet floor, got up, and continued to work the rest of his shift, for at least 3 hours. When he went home, he discovered that he had bruised his left arm and left hip. He informed his supervisor the next day, who told him to seek urgent medical attention.

His evaluation at an urgent care center revealed no fractures or acute abnormalities on his brain CT scan. He experienced pain over the next few weeks as the bruises resolved but did not use any analgesics because he was concerned about further bleeding due to his bruises.

He has hypertension, for which medication was prescribed. He does not always fill his prescription, and he says that this is because of the cost of his copay. He has been told that he has high blood glucose levels, but he has not received a diagnosis of diabetes or metabolic syndrome. His weight is normal.

The patient appears well-nourished and is alert and cooperative. His skin appears normal. Pulses are normal and regular. The results of cardiac, respiratory, and abdominal examinations are normal.

His cranial nerve examination is normal. No facial asymmetry or sensory deficits are noted. Pupils are equal, round, and reactive to light. He does not have papilledema.

He has right upper extremity dysmetria on his finger to nose test, without a deficit on the left. He also is slow and clumsy when performing rapid alternating movements with his right hand, but he has no difficulty on his left side.

His gait is normal, but he has difficulty with the tandem walk and looks like he will fall to the right. He leans in the wall for support. He is not able to stand with his feet together and his eyes closed.

His brain CT scan obtained at the time of his fall is re-examined. The cerebellar lesion was present at that time, was not obvious, and already appeared chronic. He had not had any previous vascular imaging.

What is your diagnosis? >>

The patient received a diagnosis of chronic cerebellar stroke, which was considered to be the cause of his dizziness and dysmetria. He did not have signs or symptoms of head trauma when he fell, which supports the hypothesis that his cerebellar lesion was the cause (rather than the consequence) of his fall 2 years earlier. Given his complete vertebral occlusion, he likely had an ischemic stroke.

The unusual aspect of his symptoms is that he has been complaining of dizziness since his fall, yet he did not seem to have these symptoms before the fall. While the fact that he had the cerebellar lesion prior to his fall raises suspicion that he could be exaggerating his symptoms for secondary gain, he is not interested in leaving his job and is proud of his ability to continue to work.

It is likely that the patient had some features of cerebellar impairment, such as dysmetria, before his fall, but that he began to notice his vulnerability after he fell. His mild sensory deficit could be new-onset neuropathy, perhaps related to his elevated blood glucose, and it may be adding to his sense of imbalance.

Cerebellar strokes are not as common as strokes in the cerebral cortex or the brainstem. This is largely because of the blood supply from both vertebral arteries.

Hypertension and small vessel disease can predispose to cerebellar strokes, and they can also be cardioembolic events.1Cerebellar strokes can be ischemic or hemorrhagic and may result in edema and possibly hydrocephalus.2

Symptoms can include any combination of lightheadedness, vertigo, nausea, headaches, and difficulty with balance and/or coordination, and trouble with swallowing. In addition to these non-focal symptoms, cerebellar lesions can produce focal symptoms, which tend to be ipsilateral to the lesion.

On physical examination, they can produce diminished reflexes and hypotonia, rather than the hyperactive reflexes and increased muscle tone characteristic of other central nervous system lesions. Cerebellar lesions can also cause a variety of signs on physical examination, including ataxia, saccades, dysmetria, tremors, dysarthria, and impaired gait.

The non-focal symptoms can be more noticeable to patients than the focal symptoms. Thus, cerebellar strokes can be misdiagnosed as migraine, vertigo, or movement disorders.

• A traumatic fall can cause a brain injury, but it may also be caused by a preexisting brain lesion

• Some patients are able to compensate well for their neurological deficits, which can potentially delay diagnosis

• Cerebellar lesions can produce non-focal symptoms, which can delay diagnosis