Matthew Klein, MD, MS, FACS, the COO of PTC Therapeutics, discussed a supplemental new drug application for the treatment in a younger group of patients, which has been granted priority review by the FDA. 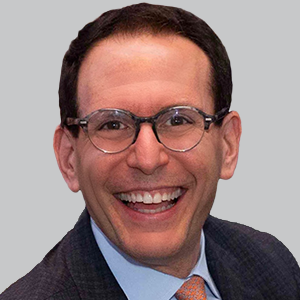 Risdiplam (Evrysdi; PTC Therapeutics/Roche) is currently used to treat spinal muscular atrophy (SMA) in adults and children older than 2 months of age, but earlier this month, a supplemental new drug application (sNDA) for the therapy was granted priority review by the FDA for presymptomatic babies younger than 2 months of age. If approved, the sNDA would make Evrysdi the first treatment administered at-home for presymptomatic babies with the condition.1

Evrysdi is being evaluated in several different trials, with the sNDA submission incorporating interim data from the RAINBOWFISH study (NCT03779334), which included 5 babies with SMA, all of whom maintained the ability to swallow and feed exclusively orally after 12 months of treatment.2 Further, 4 out of 5 babies (80%) were able to stand and walk independently, which is a remarkable feat, according to Matthew Klein, MD, MS, FACS, chief operating officer, PTC Therapeutics.

Klein sat down with NeurologyLive® to discuss the potential expanded indication, which could offer unique benefit for babies with SMA prior to the development of symptoms, hopefully improving outcomes via earlier intervention. Klein shed light on the data from the RAINBOWFISH trial, while also commenting on risdiplam’s safety profile and the advantages that at-home administration affords this patient population.

NeurologyLive®: How did the results of RAINBOWFISH compare with those in prior -FISH study populations?

Matthew Klein, MD, MS, FACS: It’s exciting data, and of course, great news from the FDA regarding the priority review for the sNDA. Evrysdi is already approved in the United States and in 71 countries around the world for children and adults with SMA aged 2 months and older. The sNDA, based on the RAINBOWFISH trial, focuses on expanding that label to include infants 0 to 2 months who are presymptomatic, so these would be babies who are born and diagnosed with SMA on newborn screening, don't yet have symptoms, but then would qualify for treatment with Evrysdi. Of course, it's well known in SMA, as well as in other diseases, that earlier treatment is better, and there's clear evidence that if we can treat SMA sooner, before there's loss of motor neurons, the outcomes will be better. So that's why this is so critically important in terms of being able to provide Evrysdi to a population that, while not yet symptomatic, can certainly enjoy benefits.

The RAINBOWFISH trial enrolled patients who were 0 to 2 months of age with a diagnosis of SMA, but [they] were not yet symptomatic—so they're presymptomatic patients with diagnosis of SMA that were treated with risdiplam. The interim data, which is forming the basis of the sNDA, is based on the first 5 children who were enrolled in that study, who demonstrated very important efficacy signals. First, 4 out of the 5 infants treated for greater than or equal to 12 months were able to stand and walk independently within the windows, the guidelines for healthy children. That's a remarkable outcome measure. This is a disease, SMA, where you would not expect these children to be able to achieve simple milestones like head control, sitting, rolling, crawling, let alone standing and walking. By being able to, in 80% of the children, achieve standing and walking, essentially within normal development criteria, is really an impressive result, and 100% of the children were able to crawl, roll, sit, and have head control, so really what you're seeing is the development of normal milestones, as if they were not affected by SMA, and that those are important results.

How would you describe the safety profile in this specific trial? Anything differ from the rest of the development program?

As always, safety is really important, especially when you are dealing with very small children. Over the course of the study, where this analysis was done, there were no serious adverse events related to Evrysdi. That's an important safety signal and a very encouraging safety finding.

Any adverse events that occurred were resolved or resolving with ongoing treatment with Evrysdi. The most common adverse events were all things that were reflective of the age of the babies, rather than the underlying SMA. What does that mean? That means you're seeing very common things that little babies would get in the trial, [which were] not attributed to the drug. In summary, we're seeing these really impressive clinical results with a very strong safety profile, as has been the case with Evrysdi to-date.

Were there otherwise any marked or surprising data points with risdiplam treatment in this population?

When you think about the natural history of SMA, that is, when it isn't treated, children don't achieve these important motor milestones—they don't achieve the ability to sit up, to crawl, to walk, can't swallow and as a result of these deficits are at risk for serious morbidity and even mortality. Then you look at the RAINBOWFISH data and see that all 5 infants who received risdiplam for greater than 12 months maintained the ability to swallow, were able to feed exclusively by mouth, achieved head control, the able to sit, to crawl, and 4 out of 5 of them are able to walk. These are impressive results, not only for what they represent in terms of functional benefit, but also minimizing the risk of disease complications like pneumonia and other infections that could be life-threatening in babies.

How critical is the timing of treatment, particularly with earlier diagnoses?

We know that early detection is important in many diseases, and it's particularly true in SMA because the loss of motor neurons, which is what happens with the disease, can't be regenerated. Once the disease starts to set in, and you lose muscle function, patients are not going to get it back. If you think about it, being able to treat before there's potentially any loss of muscle is incredibly important. There's a clear link between early treatment in SMA before symptoms start and the improvement of outcomes.

What would this expanded age indication offer to physicians in terms of the impact on patient care?

When you talk about newborn screening—newborn screening programs for any disease—the ones that are in place for SMA play an important role in early diagnosis and treatment. So, you're in a situation now where we have newborn screening for SMA, and that means that when babies are born, you can know right away that they have SMA, even though the babies don't have symptoms. This provides a very important situation that allows treatment to begin in these presymptomatic babies and prevent or reduce the symptoms of the disease from ever developing, which can significantly improve patient outcomes over time. It's a really important addition to the tools that physicians can have in the management of babies with SMA.

What advantages does the at-home administration offer?

An important defining characteristic of Evrysdi is that it is an oral small molecule therapy—something that can be taken by mouth—that can be given at home, that gets everywhere in the brain and elsewhere in the body that can be affected by SMA. It has all the advantages of an oral therapy—it's not being delivered to one part of the body, it's getting everywhere it needs to get, and it's oral and at-home. Importantly, as an oral therapy, Evrysdi can be administered at home. There is no need to travel to specialized medical facilities or hospitals for medical procedures in order to receive therapy whether that procedure is a repeat injection in the back, or intravenous administration.

The fact that this in an at-home therapy is an incredible advantage always, and then you think about where we live now in terms of COVID, it's even more significant, as parents don't want to have to travel to medical facilities for procedures in this current environment, or quite frankly ever, if they don't have to. That's really a benefit of the therapy.

What should the clinical community know ahead of the additional data being presented at MDA in March?

What's really important is the impressive findings reported to-date. All 5 children maintained the ability to swallow, 80% of them were registered as having achieved normal walking and standing milestones. That's not SMA—this is a clear departure from the disease—that all 5 children achieved milestones. I think these data are an incredibly important addition to the existing data collected from FIREFISH, SUNFISH and JEWELFISH studies and, with approval of the sNDA provide physicians the ability to potentially impact the disease in newborns before symptoms present.