Solriamfetol and the Impact of Residual Excessive Daytime Sleepiness

Paula K. Schweitzer, PhD, discussed her findings on the safety and efficacy of solriamfetol in patients receiving OSA therapy and the need for more research on residual excessive daytime sleepiness. 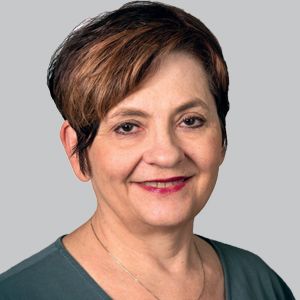 Data from an open-label extension trial (NCT02348632) evaluating solriamfetol (Sunosi; Jazz Pharmaceuticals) demonstrated that the treatment is safe and efficacious among patients with obstructive sleep apnea (OSA) regardless of adherence to continuous positive airway pressure (CPAP), defined as primary OSA therapy.1 Solriamfetol, a dual-acting dopamine and norepinephrine reuptake inhibitor, received FDA approval for the treatment of excessive daytime sleepiness (EDS) in adults with narcolepsy or OSA in March 2019.2

Lead author of the study Paula K. Schweitzer, PhD, director of research, St. Luke’s Sleep Medicine and Research Center, explained that the clinical need to treat patients who are both adherent and nonadherent to primary OSA therapy is what motivated her to conduct the study.

Schweitzer and colleagues found that at 40 weeks, mean Epworth Sleepiness Scale (ESS) scores were 6.5 in the adherent group and 6.8 in the nonadherent group. She sat down with NeurologyLive to provide more context to the study findings, as well as to discuss the current understanding of residual EDS and where it may stem from. Additionally, she stressed the need to improve awareness of EDS for both patients and clinicians.

NeurologyLive: What prompted this study?

Paula K. Schweitzer, PhD: Sleepiness is common among patients with obstructive sleep apnea. It doesn’t occur with everyone, but it’s fairly common. It persists in approximately 9% to 22% of patients despite adequate treatment for sleep apnea. Additionally, nonadherence to sleep apnea treatment is very common and a lot of people don’t like or can’t use CPAP because they have difficulty sleeping with it. Even those who are using it may not use it all night long, and so they can be sleepy as a result of inadequate treatment, no treatment, or even with adequate treatment. Sleepiness can still persist in those cases.

Because sleepiness has consequences for productivity, potential for accidents, and reduced quality of life, the clinicians who treat this need something to help with those situations. We were looking at solriamfetol as a new treatment for sleepiness in and of itself, and decided to use both patients that were adherent to treatment, as well as those who weren’t, because both types exist. There’s a clinical need for treatment in both situations.

We wanted to find out if treatment of excessive sleepiness would cause a decrease in the use of CPAP or whatever treatment they were using for sleep apnea. The study shows that it does not, and that's really encouraging because you still want to treat that underlying disorder. That's really important for cardiovascular health and other reasons.

What do we currently know about residual EDS and are there research areas within that which require attention?

Sleepiness can be caused by a number of things. In a patient with sleep apnea, it can be caused by inadequate treatment. It can also be caused by other things that we can control. For example, insufficient sleep. If you’re only sleeping for 4 hours, you’re going to be sleepy. You want to improve that. Sometimes patients with depression feel sleepy during the daytime. If the depression is inadequately treated, you may want to focus on treating that.

Sometimes it persists despite all that. Sometimes, as I said before, the patient can’t always optimize treatment for all those conditions because of an unknown reason. We want to be able to handle that. There are animal studies that suggest that intermittent hypoxia or intermittent loss of oxygen, which can occur in sleep apnea, can cause damage to wake-promoting neurons in the brain. It may not happen to all patients and we don’t know why. Those are things that we need to look at in the future. There are also some studies in humans that show white matter structural changes in patients with sleep apnea who have residual sleepiness, but not in patients with sleep apnea who don’t have residual sleepiness. There may be something going on in the brain that is causing this residual sleepiness.

Is there a lack of awareness of EDS among those who may be eligible for treatment?

I think that can happen. There are a number of patients with sleep apnea who are not aware that they’re sleepy. If you talk to the spouse, they’ll tell you that he or she falls asleep in front of the TV all the time, whereas the patient doesn’t necessarily perceive that. A lot of people do activities to prevent themselves from falling asleep. Sometimes you have to look a bit deeper in terms of what they’re doing to determine if it’s something that needs to be treated. It’s certainly something that needs to be addressed at clinician visits and asked about, regarding whether sleepiness is persisting. Some patients will complain of it, which is straightforward, but some others don’t. For safety purposes, the clinician does need to evaluate that.

What advantages does solriamfetol bring to the sleep disorder treatment landscape?

There’s been no head-to-head comparisons of the drug with other drugs in terms of treatment, but solriamfetol definitely increases alertness significantly throughout the day. It appears that it may be better than some of the other drugs that are available to treat sleepiness. However, right now in the US, the only other drugs that are approved by the FDA for treatment of sleepiness in patients with sleep apnea are modafinil (Provigil; Teva) and armodafinil (Nuvigil; Teva), which are similar drugs.

Those drugs are not approved in the European Union as their approvals were withdrawn. Additionally, those drugs may not treat patients as well as we’d like and sometimes require increased dose for treatment. We really don’t have any other drugs to treat residual sleepiness in patients with sleep apnea. We have some stimulants that we could potentially give them [off-label], but they’re not FDA-approved and haven’t been studied in that particular condition. We don’t have the data to indicate that’s what we want to do.

Are there any plans for future research building on this study? If so, what in particular would you like to examine?

We do need a better understanding of excessive daytime sleepiness itself—that’s across the board. Patients and clinicians sometimes don’t differentiate between feeling fatigued and having no energy versus actual sleepiness where they can’t stay awake. That may be an important distinction in determining both cause of the complaint, as well as how to treat the complaint. We need to do that.

We also need a better understanding of obstructive sleep apnea. Sleep apnea is a heterogenous disorder and we’re learning that it has a number of different underlying physiological traits and a number of different phenotypes or clinical manifestations. In order to provide personalized and individualized care for patients, we need to understand those factors.