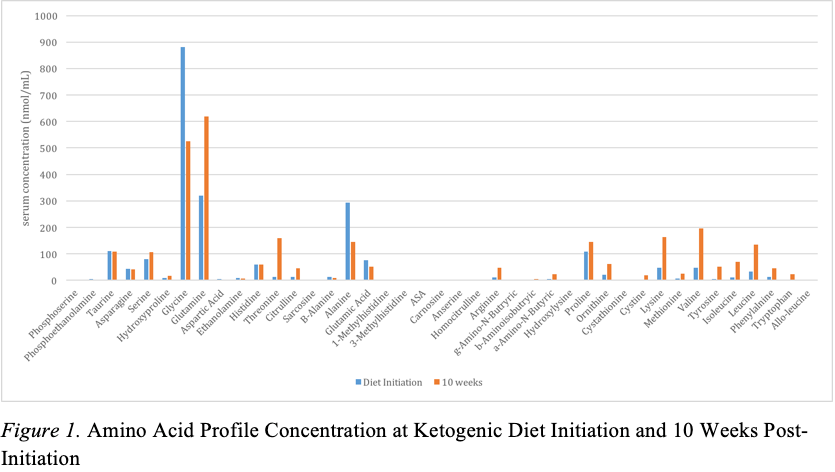 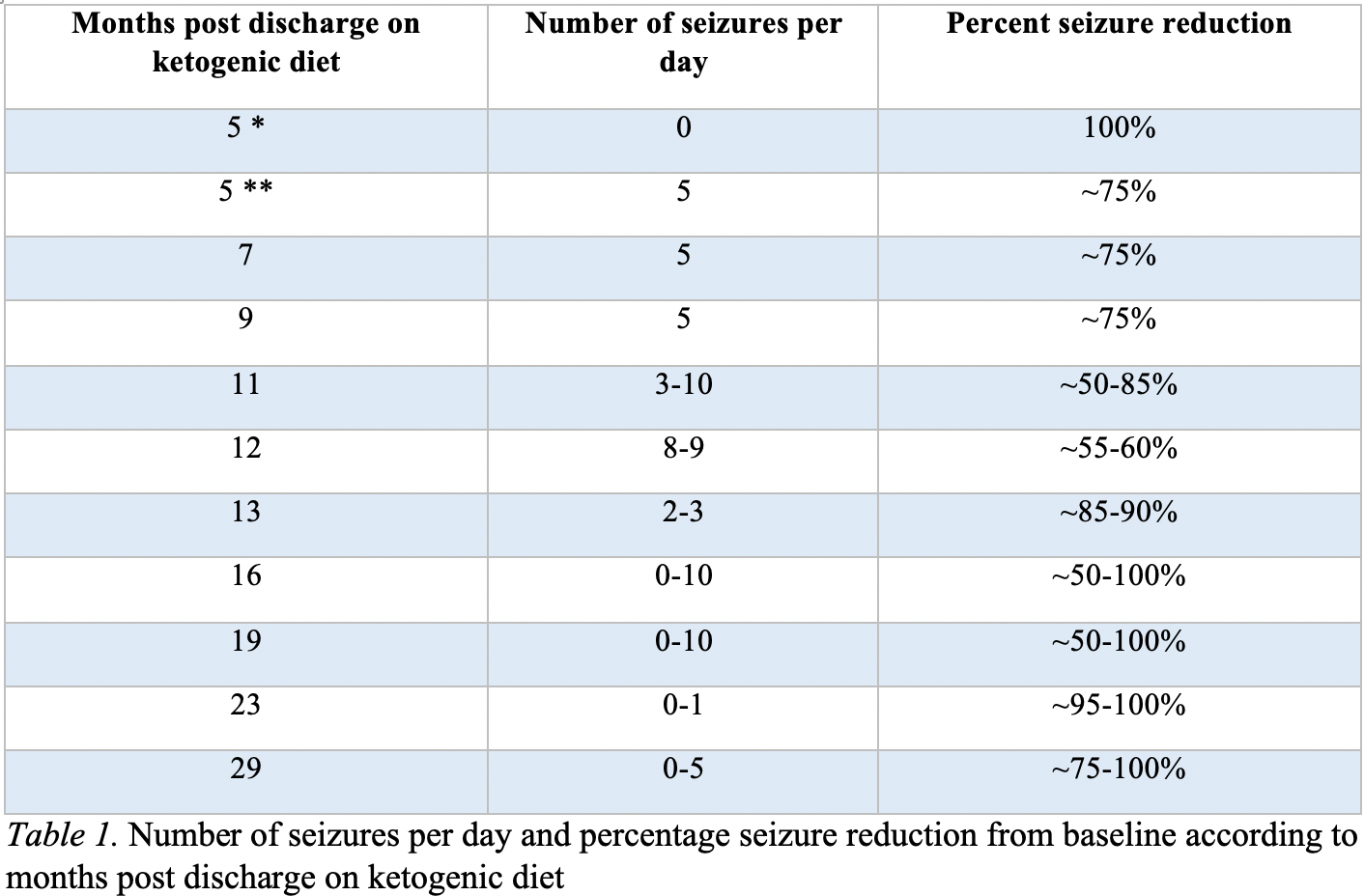 Table 1. Number of seizures per day and percentage seizure reduction from baseline according to months post discharge on ketogenic diet [* before broken femur;** after broken femur] 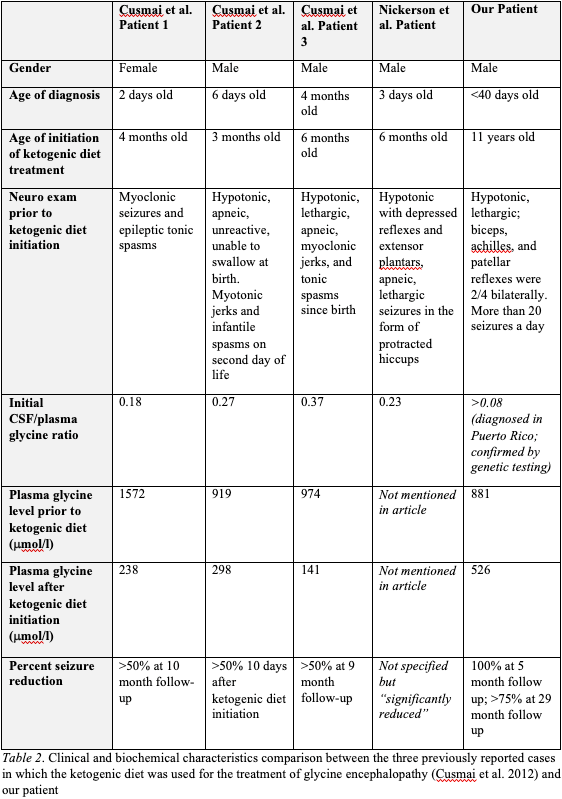 Table 2. Clinical and biochemical characteristics comparison between the three previously reported cases in which the ketogenic diet was used for the treatment of glycine encephalopathy (Cusmai et al. 2012) and our patient

Glycine encephalopathy, previously referred to as non-ketotic hyperglycinemia, is an autosomal recessive inborn error of metabolism involving the glycine cleavage system. It has an incidence of 1:60,000. As a result of this defect, glycine accumulates in several body tissues including the brain.1-4 Age of onset ranges from the neonatal period through infancy and clinical severity ranges from an attenuated form to severe. Those with the severe form suffer from lethargy, coma, seizures, apnea, and early death.1,3 However, approximately 15% of patients with neonatal onset and 50% of patients with onset during infancy have an attenuated form. Those with the attenuated form experience intellectual disabilities, seizures, hyperactivity, chorea, lethargy, and ataxia.3

The glycine cleavage mechanism is composed of 4 proteins, P-, T-, H- and L-. It has been determined that ~80% of patients with the glycine defect, have the error in the P protein,1,4

Glycine encephalopathy can also be diagnosed by biochemical and molecular analysis. It can be diagnosed by an elevated glycine level in cerebral spinal fluid compared to plasma as well as testing for mutations in the GLDC, AMT, and GCSH genes.2

The treatment goal is to reduce plasma glycine concentration and to block glycinergic receptors. Treatment options include: sodium benzoates, and NMDA receptor site antagonists such as dextromethorphan, ketamine, and felbamate. Aside from medical therapy, low protein diets can help lower plasma glycine.1,4 The ketogenic diet has been reported to reduce seizure frequency and lower glycine levels in 4 prior patients.8

We present the ketogenic diet as a therapy to treat intractable seizures and decrease plasma glycine levels in a patient with glycine encephalopathy, and review the current literature regarding this treatment.

An 11-year-old boy was transferred to our institution for evaluation and management of glycine encephalopathy. The patient was born full-term in Puerto Rico to non-consanguineous parents with a birth weight of 3.9 kg. The family reported he was discharged from the hospital on day 3 of life and was readmitted that same day in a comatose state. The patient remained in the hospital for 40 days, and during this period he was diagnosed with glycine encephalopathy based on reportedly elevated cerebrospinal fluid glycine/serum glycine ratio (>0.08). However, his specific plasma glycine concentration and CSF to plasma glycine ratio were not made available to us. Therefore, a genetic testing was done to confirm the diagnosis and indicated that the patient has a homozygous pathogenic variant c.499G>T identified in the GLDC gene.

The patient’s first reported seizure was on day 3 of life. The seizures are reported as stiffening of the legs and arms, eyes deviating to the right, and vocalization. Within 2 months, the patient developed other seizure semiologies including right-sided hemiclonic seizures. Six months prior to transfer, the patient’s parents took him to the emergency department because they saw jerking movements of the right arm and leg. His neurologist titrated his phenobarbital to 1mg/kg/day and levetiracetam to 60mg/kg/day which, according to the parents, made the patient more lethargic without significant improvement in seizure frequency.

When the patient was 11 years old, his neurologist suggested the ketogenic diet due to decreased responsiveness and poor feeding due to lethargy noticed after the medication titration. It was unclear whether the decreased responsiveness was a side effect of his recent change in antiepileptic medication, worsening encephalopathy from his underlying metabolic condition, or frequent seizures (more than 20 a day). He was admitted to our institution to initiate the ketogenic diet.

Upon admission, his neurologic examination was significant for axial and appendicular hypotonia in all limbs. He was nonverbal, and not interactive but tracked his mother and father with his eyes. His medications included dextromethorphan, lamotrigine, clobazam, levetiracetam, and phenobarbital.

The patient was started on the ketogenic diet as an inpatient in the pediatric Epilepsy Monitoring Unit (EMU) on a 2:1 ratio and titrated by 0.5 daily to a goal of 3:1.

The patient was connected for video electroencephalography (VEEG) monitoring for the duration of the hospital admission to characterize his electrographic background. The EEG demonstrated multifocal and bifrontal spike and wave complexes, frequent epochs of generalized attenuation, rudimentary sleep features, no well-sustained posterior dominant rhythm, and diffuse slowing. Electroclinical generalized tonic seizures were observed up to the second day after diet initiation which is also when the patient’s urinalysis started demonstrating ketone bodies.

The patient was discharged home after a 5-day hospitalization on a 3:1 ketogenic diet administered via nasogastric tube. Plasma glycine levels decreased following diet initiation and an improvement in both the amino acid profile and seizure frequency were documented (Figure 1 and Table 1, respectively). Upon discharge, the patient showed a dramatic increase in alertness and wakefulness compared to the day of admission. No seizures were seen after the first day with measurable ketones and for the first 5 months of diet therapy. Since then, the patient has had a greater than 50% seizure reduction. vEEG recordings both pre-and post-diet initiation were unchanged.

The ketogenic diet has been the therapy of choice for certain pediatric epilepsy conditions that are unresponsive to pharmacologic treatment alone, especially those secondary to metabolic diseases.7 This diet was only recently proposed as a treatment option for seizures in patients with glycine encephalopathy due to the ineffectiveness of antiepileptics alone. In all 4 of the previously reported cases, a reduction of seizures and a decrease in plasma glycine levels were noted when the ketogenic diet was used in conjunction with conventional treatments for glycine encephalopathy (Table 2).8

While the ketogenic diet has been shown to decrease seizure activity, the mechanism of action still remains unknown. Some hypotheses include:

The 4 reported cases in which the ketogenic diet was used for the treatment of glycine encephalopathy occurred in a 4-month old female, two 3-month old males, and a 6-month old male. In these cases, the ketogenic diet along with the standard therapy showed a dramatic decrease in seizure frequency and severity, an improvement in alertness, and a decrease in plasma and CSF glycine levels. All 3 of the Cusmai et al. patients had >50% seizure reduction at their 9-month follow up. Unlike our patient who was originally started on a 2:1 diet ratio and titrated to a 3:1 ratio, these patients were started and kept on a 4:1 ketogenic diet. Our patient’s diet never exceeded 3:1 due to his low energy requirements and the need to keep his ratio of calories and protein at the proper level.

Related content: Updated Clinical Guidelines on the Ketogenic Diet in Children with Epilepsy

Another difference between previous cases and this case was the relatively late timing of diet initiation after diagnosis. In the previous reported cases, the patients were started on the ketogenic diet just a few months after initial diagnosis. However, our patient was started almost 11 years after his initial diagnosis. This case suggests that the late-onset of diet initiation may still be effective in reducing seizures despite the heavy burden of seizures that have occurred thus far.

While all 5 of the patients experienced an increased level of alertness after initiation of the diet, they exhibited continuation of severe psychomotor delay even after seizure frequency improvement. This suggests that the ketogenic diet did not alter their static encephalopathy.

In all cases, a dramatic reduction in seizure frequency was reported just days after the initiation of the diet. In our patient, a reduction in seizure activity correlated with a decrease in glycine and increase in ketones. There was a decrease in seizure frequency by 100% up to 5 months following the commencement of the ketogenic diet until the patient broke his femur. A 100% seizure reduction rate was not achieved in any of the other cases. Among all patients, no significant adverse effects of the diet were reported.

The decrease in seizure frequency, increase in wakefulness and alertness, and relative safety of this treatment seen in this case emphasizes that a ketogenic diet along with standard treatments for glycine encephalopathy should be considered to treat intractable epilepsy. Larger studies are needed to evaluate the diets effect on plasma glycine levels.

12. Dahlin M, Elfving A, Ungerstedt U, Amark P. The ketogenic diet influences the levels of excitatory and inhibitor amino acids in the CSF in children with refractory epilepsy. Epilepsy Res. 2005;64(3):115-125.