One model of AD suggests that Aβ pathophysiology triggers downstream molecular pathways, including tauopathy, which lead to cortical neurodegeneration, and cognitive decline is further attributed to the associated neurocortical Aβ plaques. 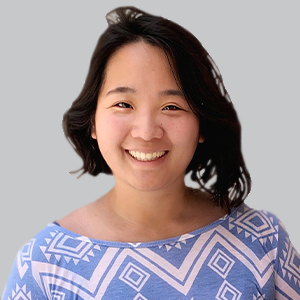 ALZHEIMER DISEASE (AD) IS A progressive and incurable neurodegenerative disease that compromises cognitive function, with an increased incidence in older individuals.1,2 AD currently affects approximately 45 million individuals worldwide and is ranked as the fifth leading cause of death globally.3 AD is stratified into early-onset (EOAD) and late-onset (LOAD), distinguished by age of onset (cutoff of 60 or 65 years) and clinical manifestations (EOAD is more aggressive and exhibits heterogeneous clinical presentations including visuospatial, language, executive, or motor dysfunction).2,3 Arguably, EOAD is more impactful on quality of life for affected individuals, as they are less likely to obtain an accurate diagnosis and may suffer social and financial disruptions because of their young age.2 Nonetheless, EOAD and LOAD share an underlying neuropathology: aberrant amyloid-b (Ab) homeostasis in the brain.2,3 Indeed, EOAD is associated with highly penetrant mutations affecting the Ab pathway (ie, APP, PSEN1, and PSEN2), whereas LOAD is a multifactorial disease with a more complex genetic background (ie, more than 50 gene variants with no known causal variant) that also includes disruptions to Ab homeostasis.2,3 One model of AD suggests that Aβ pathophysiology triggers downstream molecular pathways, including tauopathy, which lead to cortical neurodegeneration.1-4 Cognitive decline is further attributed to the associated neurocortical Aβ plaques,5 which are a pathological hallmark of AD.2,5

Approved AD therapeutics are designed for short-term management of symptoms: cognitive dysfunction and behavior.2,5 These therapeutics are accompanied by unpleasant adverse effects.1,5-7 Novel therapeutics are needed to address the root cause of AD and do so in a timely manner to mitigate neuronal and synaptic loss.3 Comprehensive studies of the spatiotemporal dynamics of the Aβ pathway can pinpoint the critical genetic and biological factors that regulate AD pathophysiology.3 This is particularly important, as Aβ pathophysiology occurs decades before the onset of outwardly visible, clinical symptoms.2,3 Novel Aβ-targeting therapeutics derived from these studies could then consider the disease stage and/or individual biology to better halt or even reverse Aβ plaque formation and preserve neuronal structure and function.3

Aβ is a degradation product of amyloid precursor protein (APP), a single-pass transmembrane protein expressed at high levels in the brain and rapidly metabolized by a series of proteases (FIGURE).3,5,6 Aβ peptides are continuously produced in the brain.6 These Aβ fragments can be categorized by length (ie, shorter Aβ1-37, Aβ1-38, and Aβ1-40; or longer Aβ1-42 and Aβ1-43).4 Patients with AD produce more of the longer Aβ variants, whereas cognitively intact individuals produce more of the shorter Aβ variants.4 This is significant because the longer Aβ variants tend to aggregate to form amyloid fibrils that make up the AD plaques that cause synaptic dysfunction and related cognitive deficits.3,5 Yet the shorter, diffusible Aβ variants have recently been shown to also be a major contributing factor to the cognitive decline experienced in AD by disrupting neuronal structure and function.5 Levels of soluble toxic Aβ in the brain correlate with spatial learning.3 No treatments that can eliminate these shorter variants currently exist.5 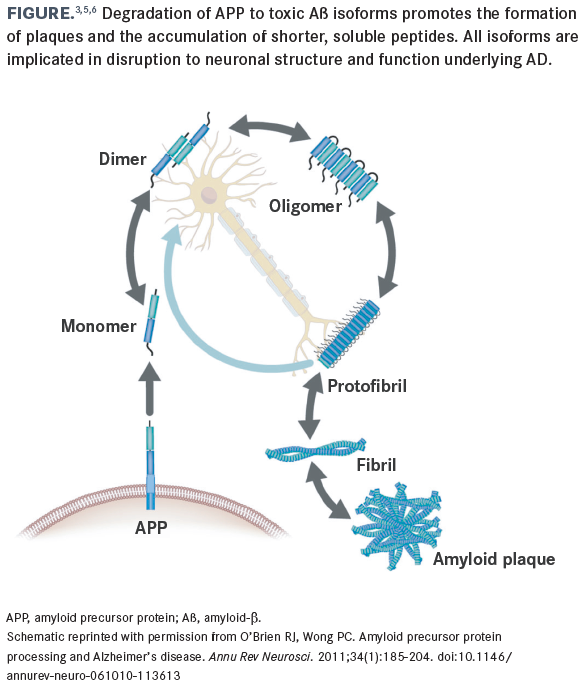 Aβ-mediated molecular pathways are linked to lipid homeostasis and angiogenesis.3 For example, Aβ1-42 may form ion channels and/or pore structures that regulate calcium homeostasis to drive receptor conductance.4 Biophysical assays have demonstrated a correlation between Aβ variant composition and formation of amyloid fibrils, whereby the shorter variant Aβ1-38 appears to disrupt Aβ1-42 from self-associating into channels, pores, and fibrils.3,4 Most Aβ length variants are considered neurotoxic or amyloidogenic and can cause significant defects in neuronal membrane integrity, synaptic plasticity, and memory formation.4

The dysregulation of Aβ lies in an imbalance between its neuronal production and extracellular clearance.3,4 In fact, Aβ1-42 accumulation in the brain increases during early development of AD, potentially because of decreased transport of Aβ1-42 from the brain or a change in enzymes that typically degrade Aβ1-42.6

A total of 32 APP, 179 PSEN1, and 14 PSEN2 natural variants are associated with EOAD.6 The pathogenicity of this APP degradation pathway is supported by evidence that a natural rare variant in γ-secretase, the enzyme that normally cleaves APP into Aβ peptides, appears to protect Icelandic individuals against AD by minimizing Aβ production.3 Natural variants in PSEN1/2, subunits of γ-secretase, can also shift the ratio of Aβ length variants to favor the production of the longer, plaque-implicated Aβ variants.3

Epigenetic dysregulation, particularly in small, noncoding RNAs like microRNAs (miRNAs), has also been linked to dysregulation of the Aβ pathway.3 These miRNAs impede the translation process by upregulating the APP gene or increasing activity of the β-secretase called β-site APP cleaving enzyme 1 (BACE1), which cleaves APP upstream of γ-secretase.3

LOAD can also be attributed to genetic variants.2,6 The most significant LOAD-implicated gene is APOE, the major apolipoprotein in the brain.3,6 APOE facilitates Aβ aggregation dynamics by accelerating the initial seeding or nucleation of Aβ deposition.2,3,6 APOE comprises 3 isoforms—apoE2, apoE3, and apoE4— whereby carriers of APOE-ε4 are at increased risk (3-fold for heterozygous individuals and 15-fold for homozygous individuals) for AD.3,6 Carriers of APOE-ε4 exhibit divergent age-related memory trajectories.3 APOE-ε4 may function to enhance Aβ aggregation by perturbing Aβ clearance.3

Lecanemab (Eisai and Biogen) and aducanumab (Biogen) are Aβ-directed monoclonal antibodies that can distinguish and bind to aggregated soluble and insoluble Aβ, to target these toxic Aβ variants for degradation.1,7 Aducanumab was approved for use (regimen scaling from 1-10 mg/kg) in 2021 for patients with mild cognitive impairment or mild dementia associated with AD.1 Lecanemab is in phase 3 trial (NCT03887455).7 Top-line results describe a decrease in Aβ in the brain accompanied by a minor improvement in the Clinical Dementia Rating Sum of Boxes (CDR-SB) score at 18 months.7 However, both monoclonal antibodies are accompanied by significant risks, including brain edema or sulcal effusions known as amyloid-related imaging abnormalities.1,7

An emerging approach to managing aberrant Aβ in AD is by directly preventing oligomerization of Aβ using drug candidates that can stabilize monomeric Aβ in an aggregation-incompetent state.5 One such drug candidate in preclinical trials is RD2, which was rationally designed from the drug D3 to include a repositioned amino acid sequence.5 RD2 (administered daily at ~200 mg/kg) enhanced Aβ elimination efficiency over 4 weeks in AD mice.5 RD2 successfully blocked progression of AD, even exhibiting a curative effect while also improving cognition and memory.5

Another emerging approach for stimulating APP metabolism and Aβ elimination is environmental enrichment.6 In a murine model, Aβ was indeed lowered because of synaptic activity triggered by intellectual stimulation and exercise.6 Other novel therapeutic strategies could potentially include multidrug regimens that simultaneously target molecular players in APP metabolism and Aβ degradation.6,7

Overall, abnormal processing of APP and subsequent accumulation of toxic Aβ peptides (both soluble and aggregate forms) are key factors in AD.6 Thus far, strategies for targeting components of the APP and Aβ pathway have been met with consequences to myelination, synaptic plasticity, memory, emotion, cognition, and even resulted in skin tumors in murine models.6 For instance, targeting γ-secretase effectively decreased Aβ production; however, as γ-secretase is implicated in processing transmembrane proteins, γ-secretase knockdown also impaired T- and B-cell maturation.6 Although such challenges exist, significant progress has been made over the past 30 years.6