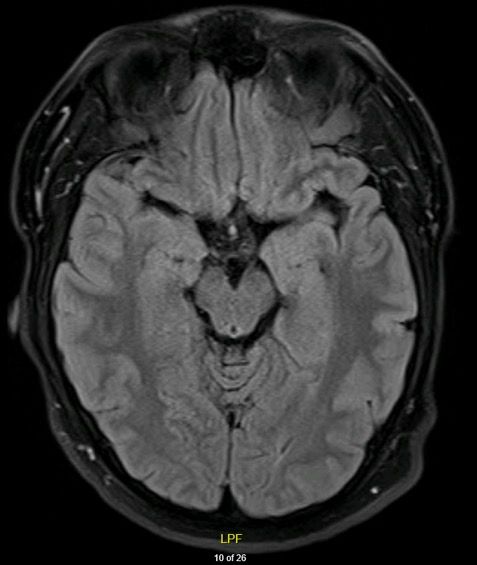 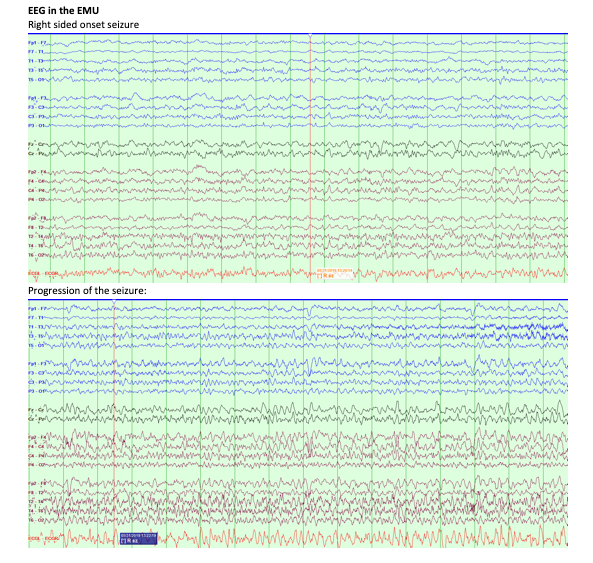 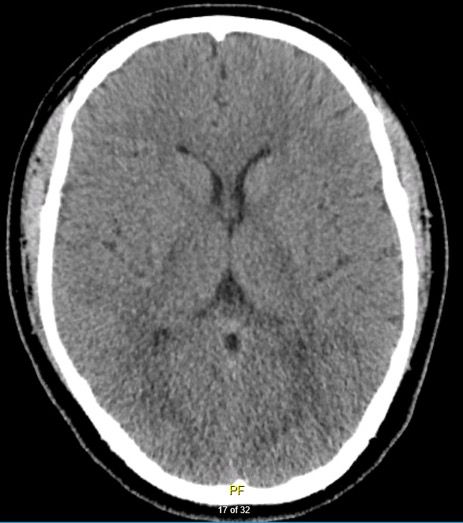 A 23-year-old male college student with no prior medical history except attention deficit disorder (ADD) since childhood (maintained on lisdexamfetamine) was seen in the emergency department with first seizure: a sensation of ringing in his ears and headache (severity of 5 to 10/10) immediately preceding a generalized tonic-clonic (GTC) seizure with loss of consciousness and tongue bite. The patients had no history of bladder/bowel incontinence and had post-ictal tiredness. There was no history of any identifiable precipitants.

Initial tests, including basic labs, and a CT of the head, were all normal.

He was seen by a neurologist within 2 days. Additional history obtained at the time revealed no risk factors for seizures: normal growth and development; no history of febrile seizures, prior head trauma or other neurological disorders; no family history of seizures; no history of tobacco, alcohol or other substance use. The general physical and neurological exam were normal.

One week later, the patient woke up around 4AM yelling in pain from severe headache. This was also associated with disorientation, slurred speech, and gait instability, but he returned to baseline within 20 minutes. He was seen by his neurologist 2 days later and was started on valproate (VPA) for presumed seizures. At that visit with the neurologist, the patient admitted that he had been having feelings of disassociation, auditory hallucinations, and tiredness throughout the day since the initial seizure.

Over the next few weeks, he had multiple episodes of falling out of bed during sleep (found on the floor) with at least 1 occasion of tongue bite. He was reassessed by the neurologist and with the episodes presumed to be seizures and not controlled on VPA 500 mg bid, lacosamide (LCS) 100 mg bid was added. He was then sent for evaluation in the epilepsy monitoring unit (EMU).

EMU evaluation occurred within 2 weeks of the last neurologist visit. Three focal right posterior temporal (T6/O2) onset seizures were recorded in the EMU. After the seizures were recorded, the patient was given a loading dose of LCS 10 mg/kg (=1000 mg) with plans to discharge home the next day.

Within 6 hours of LCS load, the patient had an acute episode of psychosis with suicidal ideation and physical aggression. Psychiatry consult was done and PEC with chemical restraints (haldol, seroquel) was instituted.

Fluctuating behavioral changes required continued use of chemical restraints as well as bedside sitter, while the patient’s family (parents and only sister) remained at the bedside. Work up was also initiated for encephalitis, occult malignancy, and infectious causes; and empiric treatment for herpes simplex virus was initiated.

With no clinical improvement and continuing behavioral difficulties (6 days after acute psychotic episode), empiric treatment with IVIG for possible limbic encephalitis was initiated. However, the patient had a reaction to either IVIG or Benadryl used as pre-medication, leading to a GTC seizure and respiratory depression, nearly requiring intubation and was admitted to Neuro-ICU with continuous-EEG monitoring. IVIG was then discontinued and high dose (1000 mg) steroids (x 7 days) were initiated. As for anti-seizure medication, LCS was discontinued due to the concern of LCS-induced psychosis, and VPA had to be changed due to high ammonia levels (98; normal range:10-50). He was maintained on eslicarbazepine with no further seizures noted on continuous-EEG.

However, the patient continued to have worsening hallucinations with suicidal and homicidal ideation. At one point, he exhibited significant agitation towards staff and family members and chemical restraints were continued, with psychiatry follow-up.

By day 4 of high-dose steroids, the patient started to exhibit less psychotic behavior with return of some insight, and he was transferred out of Neuro-ICU.

After 7 days of (IV) high-dose steroids (patient reported to be at 60% of his baseline cognitive state), steroids were continued (PO) on a tapering schedule, and IVIG was re-introduced. With initiation of IVIG, the patient was noted to have brief clinical seizures (left-sided facial twitching) and eslicarbazepine dose was increased (800 mg to 1200 mg). Repeat continuous-EEG monitoring showed right-sided focal slowing without any epileptiform activity or electrographic seizures.

The patient completed the 5-day course of IVIG without further events and was scheduled for discharge when he had another episode of significant agitation and aggressive behavior. He was then transferred to the Acute Psychiatry Unit (APU) for further management. He was continued on quetiapine 100 mg tid and was started on haloperidol 5 mg q 6h PRN as well as lorazepam 2 mg q 6h PRN. He stayed in the APU for 7 days and was discharged home from the APU.

At the time of discharge, the patient was alert and oriented with restricted affect. Memory and cognition were intact without hallucinations, delusions, suicidal, or violent thoughts.

Two weeks later, he was seen for out-patient follow-up by neurology, he was noted to have a slightly flat affect but was otherwise well. He also had follow-up with psychiatry around the same time and was reported to be at baseline with no suicidal ideation, homicidal ideation, self-injurious, or other violent behavior; he was accepting of the interventions with fair progress towards goals of care.

Additional results available at that time:

Three months after onset of symptoms (30 days in hospital, with 4 days in EMU, 8 days in NICU and 7 days in APU) was autoimmune (nmdar-Abs positive) encephalitis.

NMDAr-Abs encephalitis is typically reported in women and mostly associated with tumors (teratomas). The clinical course is usually (in females) with fever, headache, and respiratory or gastro-intestinal symptoms followed mostly by psychiatric symptoms and rarely seizures (if they occur, they are usually GTC seizures).

However, the presentation is different in men (rarer occurrence) who may present with focal seizures, normal MRI, and rarely have associated tumors. A high index of clinical suspicion is required for timely intervention and appropriate management.