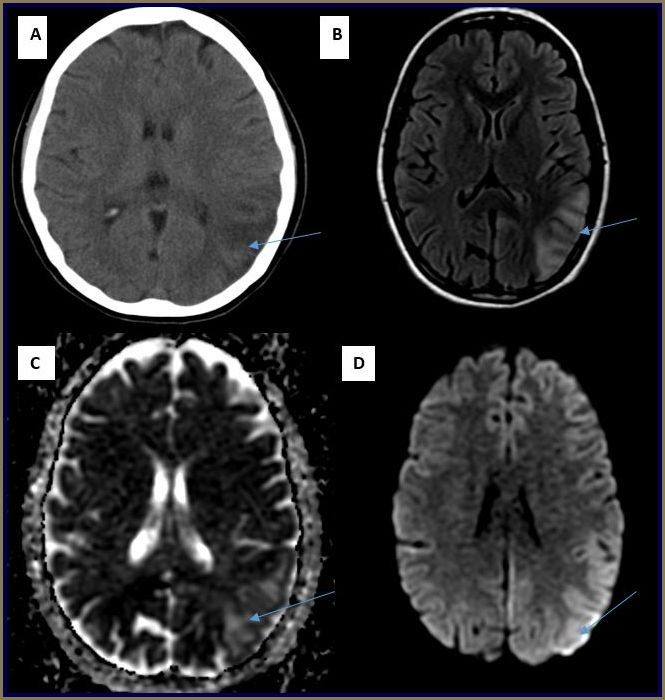 Mitochondrial encephalomyopathy lactic acidosis and stroke-like syndrome (MELAS) is one of a complex group of heterogeneous multisystem disorders affecting the nervous system, commonly referred to as mitochondrial encephalopmyopathies. Approximately 80% of MELAS cases are associated with a point mutation in the MT-TL-1 gene encoding tRNALEU (m.3243A>G).1,2 This mutation causes the absence of posttranscriptional taurine modification of mitochondrial tRNA-leucine–disrupting mitochondrial protein synthesis. Because it is inherited via the mitochondrial DNA, this mutation displays maternal inheritance with penetrance based on the degree of heteroplasmy.3 Although maternally inherited, most patients who present with MELAS have no family history of the disorder. When questioned, non-neurologic symptoms of mitochondrial disease, such as diabetes mellitus, hearing loss, or visual impairment, are often elicited in family members.

A 20-year-old man presented to the emergency department in status epilepticus. His parents reported 7 episodes of generalized tonic-clonic seizures with upward gaze deviation, each lasting for 1 to 2 minutes. The patient had experienced 2 earlier generalized tonic-clonic seizures, once at 2 years of age and once at 14 years, both associated with febrile illnesses. Family history was noncontributory.

On physical examination the patient was drowsy although he was oriented and able to follow commands. No focal deficits were seen and strength was normal in all 4 extremities. Computed tomography scan of the brain showed hypodensity in the right parieto-occipital region. Magnetic resonance imaging (MRI) of the brain showed findings consistent with ischemia in the same region (Figure) as well as confirmation that the Figure is original to the article. Magnetic resonance angiography and venography were normal. Electroencephalogram (EEG) showed mild diffuse encephalopathy without epileptiform activity. Laboratory studies, including cerebrospinal fluid (CSF) analysis, were remarkable for elevation in serum (8.0) and CSF lactic acid (7.5).

Differential diagnosis of focal ischemia in the setting of generalized tonic-clonic status epilepticus can be broadly categorized into vascular, inflammatory, infectious, autoimmune, neoplastic, or metabolic disease. Given the clinical picture of an acute stroke not conforming to a known vascular territory in a young patient with elevated serum and CSF lactic acid, the diagnosis of MELAS was considered.

The patient was started on a continuous infusion of intravenous arginine and symptoms resolved within 72 hours. Mitochondrial DNA sequencing identified a 51% heteroplasmic mutation at m.3243A>G, the most common mutation associated with MELAS.

The most commonly recognized laboratory abnormality in MELAS is lactic acidosis.7 Dysfunction in the electron transport chain leads to decreased production of adenosine triphosphate, which results in upregulation of glycolysis and overproduction of pyruvic acid. Transamination of excess pyruvic acid occurs, which results in alanine or reduced to lactic acid.3 Urine organic acids may show elevated lactic acid in the urine and plasma amino acid may show elevated alanine in the blood.

Elevations of protein, lactic acid, pyruvic acid, and white blood cells have been demonstrated in the CSF of patients with MELAS. Identification of elevated CSF lactic acid in the setting of a stroke should prompt evaluation for MELAS.

The affected areas typically involve the cortex and subjacent white matter, with sparing of the deep white matter.10 Magnetic resonance spectroscopy may detect the presence of lactic acid within the infarcted area or in other unaffected regions of the brain.11 MRI findings often disappear with improvement of clinical symptoms but may produce encephalomalacia, particularly later in the course of the disease.

In 80% of patients with MELAS, diagnosis can be confirmed by identification of the most common pathogenic mtDNA variant (m.3243A>G) in the blood. In the remaining 20%, other identified mutations may be found in the mitochondrial or nuclear DNA. Muscle biopsy may be required for those with negative molecular studies.

Patients with MELAS who present with stroke-like episodes should receive a loading dose of intravenous arginine hydrochloride. Optimal dose has not been defined, however a bolus of up to 0.5 g/kg should be considered as soon as possible after symptom onset. Continuous infusion of equivalent dose should be given over 24 hours for the next 3 to 5 days, and normal saline boluses are given to maintain cerebral perfusion. Dextrose-containing fluids are given as soon as possible to reverse ongoing or impending catabolism. If the clinical presentation of altered mental status or encephalopathy persists then patients should undergo EEG to assess for subclinical status epilepticus.13,14

Once patients with MELAS develops stroke-like symptoms they should be started on oral arginine 0.15 to 0.3 g/kg daily to increase underlying arginine stores and prevent stroke-like episodes.