Experts in neurology discuss changes in cognitive health and the role that sphingosine-1-phospate receptor modulators and disease-modifying therapies play in MS management. 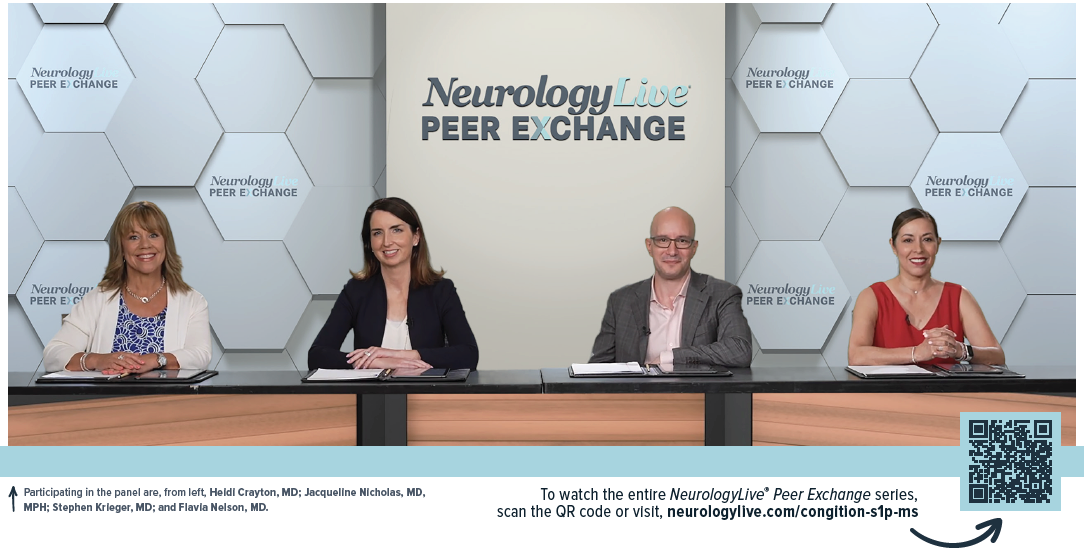 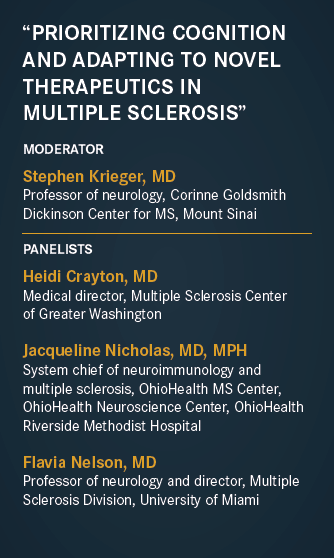 THE FIELD OF CLINICAL CARE for multiple sclerosis (MS) has evolved drastically since the turn of the century, and as new, more advanced therapies have been introduced, the need to adapt care correspondingly has emerged. The demonstrated efficacy of these novel therapies has allowed clinicians to shift their focus toward some lingering difficulties still faced by patients, namely cognitive issues.

Cognition has long posed a challenge for patients and providers, as decline can present heterogeneously and require individualized approaches. Despite therapeutic advances to control disease progression, little evidence exists showing an effect on cognitive issues, although a protective effect of early treatment initiation has been suggested. In addition, the nuance associated with this aspect of clinical MS care can be challenging to navigate. Ensuring that cognitive baselines are established and that consistent neuropsychological testing is administered are crucial, although these practices are often limited in real-world settings.

In a recent NeurologyLive® Peer Exchange, a group of experts in the clinical care of MS discussed the intersection of these advances along with lingering challenges. Titled “Cognitive Health and Sphingosine-1-Phospate Receptor Modulators in Multiple Sclerosis,” the conversation was moderated by Stephen Krieger, MD, professor of neurology at the Corinne Goldsmith Dickinson Center for MS at Mount Sinai, in New York, New York.

Krieger first guided the group through discussion about the various scales available to clinicians for the measurement of cognition, including the Symbol Digit Modalities Test, the California Verbal Learning Test-II, Brief Visuospatial Memory Test-Revised, and the Brief International Cognitive Assessment for Multiple Sclerosis. They acknowledged that many of these assessments are more effective in the clinical research setting, as they evaluate specific aspects of cognitive function, making their use in real-world settings less than ideal.

“Something like the Symbol Digit Modalities Test is a test of processing speed. It’s a good screening test, but how someone’s cognitive function is actually behaving in their lives, I think, ends up being often more meaningful,” Krieger said. He explained that the most crucial part of that process of evaluation is having the conversation with patients. “I think this is actually quite challenging because the way in our culture and our society we think about cognitive dysfunction, it’s so tied to our sense of self and our identity and our vocation and our abilities,” he said. 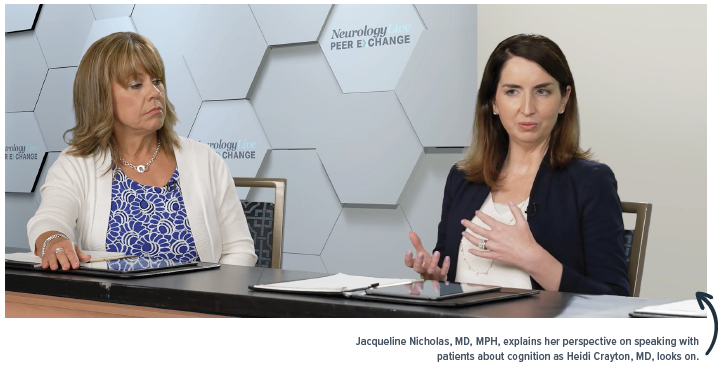 Because conversations about cognition can be sensitive to navigate, understanding patient awareness about their cognitive function can be vital to maintaining a pulse on performance. Heidi Crayton, MD, medical director of the Multiple Sclerosis Center of Greater Washington, in Vienna, Virginia, said patients often have an idea about their current function, but can be frightened by a conversation about it with their physician.

“I try to focus on talking about, if maybe there’s some cognitive dysfunction here, that we need to optimize the things that we can. Sleep and mood are huge,” Crayton said. “With those things, I really focus on initially to detract, I guess, a little bit from the frank cognitive decline that I know is going to be prevalent. I’ve seen their MRI, so I know that there is structural reason for this, but [we need] to really try to optimize sleep and mood to get the best that we can out of what we have.”

Depression and sleep deprivation, Krieger added, can both mimic and worsen cognitive dysfunction, making them essential to include in the conversation. Similarly, he said, anxiety can also replicate symptoms of cognitive dysfunction because individuals feel that they do not remember anything, but a lack of presence driven by anxiety can create a feeling of poor cognition.

Jacqueline Nicholas, MD, MPH, system chief of neuroimmunology and multiple sclerosis at the OhioHealth MS Center at the OhioHealth Neuroscience Center of OhioHealth Riverside Methodist Hospital, in Columbus, Ohio, explained that the key to these conversations is timing. Setting the expectation early that cognitive assessment is part of routine care is important to making patients aware of any potential issues. “Oftentimes, early on, [individuals] feel pretty good. They’re not thinking about that long term, but from day 1, we’re talking about the fact that MS is not only a physical disease but also affects your cognition. What we do now will help you to stay in that crew [of friends] that you love long term or help you to engage in conversations with your friends socially and your loved ones. We talk about how not addressing that can actually take away that identity that you have,” Nicholas said. 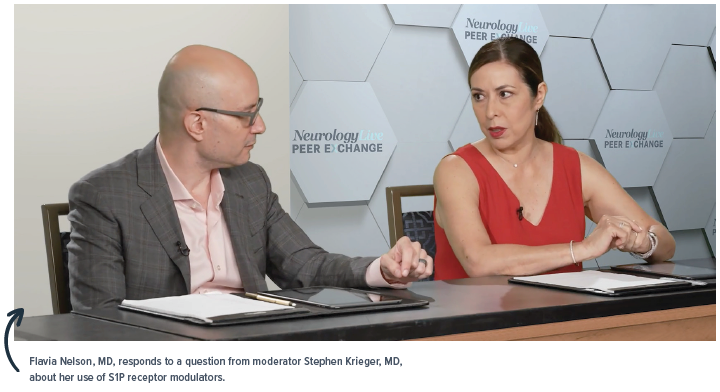 As Krieger and colleagues alluded, treatment with disease-modifying therapies (DMTs), particularly more advanced DMTs, can slow progression of disease, preserving cognitive function to an extent. Although many patients are initiated on high-efficacy therapies, the need for sequencing treatments and the discussion about stopping therapy in some patients has been an ongoing discussion among MS specialists. Some of the newer DMTs include those in the sphingosine-1-phosphate (S1P) receptor modulator class, which emerged as the first oral options for patients—making them preferred to injectable DMTs for many individuals with MS.

Crayton noted that she transitioned most of her patients on injectables to these oral therapies at the time they entered the market. “I also didn’t start [patients who had just received diagnoses] on an injectable product. I started them on an oral therapy. That’s probably the primary function for me with the [person who has just been given a diagnosis]. I don’t prescribe injectable platform therapies,” she said. “Psychologically it’s better. It’s kinder to start patients on an oral therapy. That’s probably where I use the most of my S1P receptor modulator products.”

Flavia Nelson, MD, a professor of neurology and director of the Multiple Sclerosis Division at the University of Miami, in Miami, Florida, shared that from her experience, S1P receptor modulators are good first-line agents because of their efficacy, although not every patient is willing to initiate treatment on high-efficacy DMTs because of concerns about adverse effects.

“Some patients are very concerned about safety,” Nelson said, adding, “In much the same way, some patients want something more aggressive to start with. Perhaps they can have induction therapy and then transition to something like an S1P. For example, let’s say someone goes on a monoclonal antibody, which is very important to monitor the JC virus [human polyomavirus 2] for risk for [progressive multifocal leukoencephalopathy]. You can start a patient on that [intravenous] infusion. But at some point—after a year, a year and a half, a maximum of 2 years—you need to switch medications.”

She added that clinicians do not necessarily need to switch to a higher-efficacy DMT, as some patients will respond well to lower-efficacy DMTs. “I recommend therapy on a case-by-case basis, trying to tailor it to the disease. The patient needs safety, risk vs benefit,” she explained.

Krieger agreed, noting the importance of applying data from clinical trials to the patient in question. “A treatment such as ozanimod (Zeposia; Bristol Myers Squibb) is a first-line agent or an early agent. That’s where their patient population was studied,” Krieger said. “On the other end, siponimod (Mayzent; Novartis) was studied in a much older, sicker, and more disabled population. That’s where I’m more likely to use that sort of agent, to try to match it to the data we have.

“The more we have high-efficacy medicines utilized, the more we’re going to need maintenance strategies after that,” Krieger added. “Not everyone is going to warrant the most powerful medicine we have at any given point in time for the duration. This is the nice thing about having a mature class of medicines in a mature disease state. We have the opportunity to personalize a lot of treatment choices.”