The World Sleep Society Narcolepsy Task Force surveyed clinicians in an effort to understand regional differences in the diagnosis and management of narcolepsy. 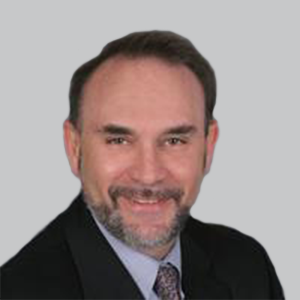 A recent survey has clarified the diagnostics and management of narcolepsy worldwide and revealed disparities due to treatment availability and expenses.

Investigators found that the majority of practitioner respondents (58%) reported not using the measurement of cerebrospinal fluid (CSF) hypocretin-1 test, while 1% reported always evaluating CSF-hypocretin-1 levels. They also saw much variability in the availability of recommended medications such as sodium oxybate (Xyrem; Jazz Pharmaceutical) and pitolisant (Wakix; Harmony Biosciences) while modafinil (Provigil; Teva) and antidepressants were the most commonly used medications.

“While there are available consensus papers on the diagnosis and management of narcolepsy, actual clinical practice is determined by access to care, availability of resources and affordability of available therapies, which differ around the world and have not been characterized. The World Sleep Society (WSS) Narcolepsy Task Force surveyed clinicians around the world, in an effort to advance the understanding of regional differences in the diagnosis and management of narcolepsy,” wrote first author Leon Rosenthal, MD, Sleep Medicine Associates of Texas, and colleagues.

Rosenthal and colleagues conducted a survey of 146 practitioners in 37 countries. More than 50% of respondents were from Europe and North America, with others from Oceania, Latin America, and Asia. The respondents had an average of 21 years in practice (standard deviation [SD], 12) and 83% reported being members of an academic institution. Most participants were neurologists (38%) and pulmonologists (21%); 10% were psychiatrists, 10% were various pediatric specialties, and less than 6% were internists, otolaryngologists, or psychologists. Fifteen percent reported their specialty as sleep medicine and these participants were mostly (59%) from North America.

The investigators found that the Epworth Sleepiness Scale was the primary clinical tool reported in assessing excessive daytime sleepiness (EDS). Sleep logs were used by 57% and actigraphy by 54%. Most practitioners reported using nocturnal polysomnography (PSG; 95%) and multiple sleep latency test, while only 39% use the maintenance of wakefulness test (MWT) although over 50% of participants in Europe and Oceania reported use of MWT.

Even in cases with cataplexy, 84% reported frequent to 100% reliance on using PSG for narcolepsy diagnosis while 2%, mostly in Latin America, reported diagnosis based on the clinical identification of cataplexy without the use of PSG testing. Thirty-eight percent, mostly from Europe, reported inclusion of HLA-DBQ*0602 typing in diagnostic assessments, 27% never included this test, and 34% rarely or sometimes used the test, mostly from North America and Oceania. Most practitioners reported identifying cataplexy in follow-up of patients with narcolepsy type 2, but in less than 10% of patients.

One percent of respondents reported always evaluating CSF-hypocretin-1 levels, 23% reported usually or sometimes, and 76% reported rarely or never. Forty-two percent reported narcolepsy type 1 (NT1) in less than 50% of their patients with narcolepsy, 36% reported NT1 prevalence between 50% and 70%, and 16% reported a greater than 70% prevalence, mostly in Europe.

The investigators found that common auxiliary symptoms (>70% of patients) were hypnagogic hallucinations (reported by 14% of practitioners), sleep onset paralysis (reported by 2%) and automatic behaviors (reported by 5%). Common sleep-related comorbidities (>10% of patients) were obstructive sleep apnea (81% reported), restless leg syndrome and periodic leg movements (62% reported), rapid-eye movement sleep behavior disorder (45% reported) and enuresis (10% reported). Out of psychiatric comorbidities surveyed, depression was the most common, with 45% of clinicians reported over 30% of patients were depressed. Cannabis was the most frequently used substance.

In terms of therapeutic agents, modafinil, methylphenidate, selective serotonin reuptake inhibitors, serotonin-norepinephrine reuptake inhibitors, and tricyclics were the most widely available pharmacological agents with reported availability by more than 90% of the participants (FIGURE). 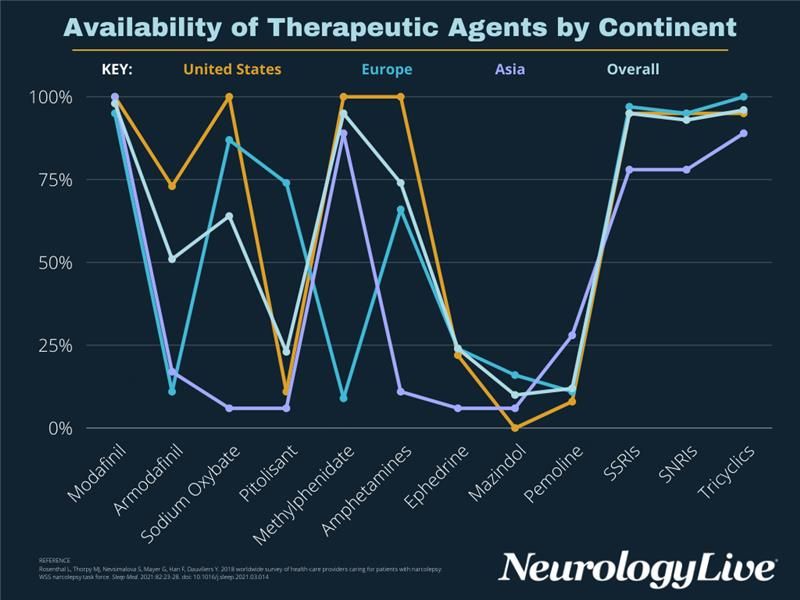 "More concerted efforts by Sleep Medicine Organizations are required in order to engage insurance and/or government decision makers and facilitate timely and adequate availability of newer therapeutic agents for patients with narcolepsy and narcolepsy spectrum conditions, as these agents have not only been proven to provide clear clinical benefit but have the potential to decrease the high utilization and expense of medical services that are typically rendered to these patients,” Rosenthal and colleagues concluded.