The investigational candidate is the subject of the 2-part phase 2/3 SUNFISH trial in young adult and pediatric patients with type 2 and type 3 SMA.
By: Jenna Payesko
Published: April 26, 2019 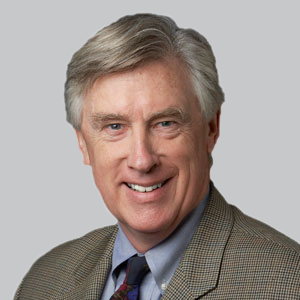 John Day, MD, PhD
After showing success in older infants with spinal muscular atrophy (SMA), risdiplam (Roche), a novel SMN2-modifying investigational treatment, is now being evaluated in adults, a patient population that has yet to be studied in a controlled trial. Risdiplam is a selective, orally active small molecule that is systemically distributed and designed to help the SMN2 gene produce more functional SMN protein, thus better supporting motor neurons and muscle function.

The investigational candidate is the subject of the 2-part phase 2/3 SUNFISH trial (NCT02908685), which is currently assessing the effect of risdiplam in young adult and pediatric patients aged 2 to 25 years with type 2 and type 3 SMA, followed by an open-label extension study.

“The point of this trial is to extend the age range of the patients, and so in the initial trial—the FIREFISH trial—we were looking at patients [who] were infants, and now we’re getting patients up to 25 years of age. That’s entering a new population,” John Day, MD, PhD, professor of neurology, pediatrics, and pathology at Stanford University Medical Center in California, told NeurologyLive. “It’s a very simple compound to use. That’s one of its advantages, that it’s an orally administered compound that is directed specifically at the splicing of the SMN2 gene. We are hoping—and the evidence to date [is showing]—that it improves SMN protein production, and thus it can really resolve the effects of SMA. So far to date, this has been evidently effective in the published data and the presented data, and it’s been really very well tolerated.”

Since there is currently very little evidence in a controlled trial format on treating SMA in adults, Day explained that regardless of the means of treatment, SUNFISH is adding value to the field by furthering the amount of data available for this patient population.

“The important point is this extension into the adult population,” Day added. “It’s problematic that nusinersen was approved for all patients with SMA irrespective of age, SMA type, or degree of severity. I’m not arguing that. I thought that was an appropriate response to the FDA with the data they were presented. But it did leave us with little to argue with insurance companies about whether or not it was appropriate to treat adult patients. I think that argument persists, and a lot of adults are having trouble being treated because there [were] scant data available to substantiate the value. If we can show in the SUNFISH trial that modification of SMN protein improves the function of adults with SMA, that’s going to be really useful across the board for SMA patients.”

Participants in the SUNFISH trial, which is taking place across 34 sites in the United States, Canada, Australia, and Europe, vary in functional status from weak nonambulant to strong ambulant, with degrees of scoliosis from none to severe (FIGURE). The trial is a 2:1 randomization of of risdiplam versus placebo for 12 months, after which all participants will move to the treatment group for an additional 12 months. Afterwards, all participants will enter an open-label extension. 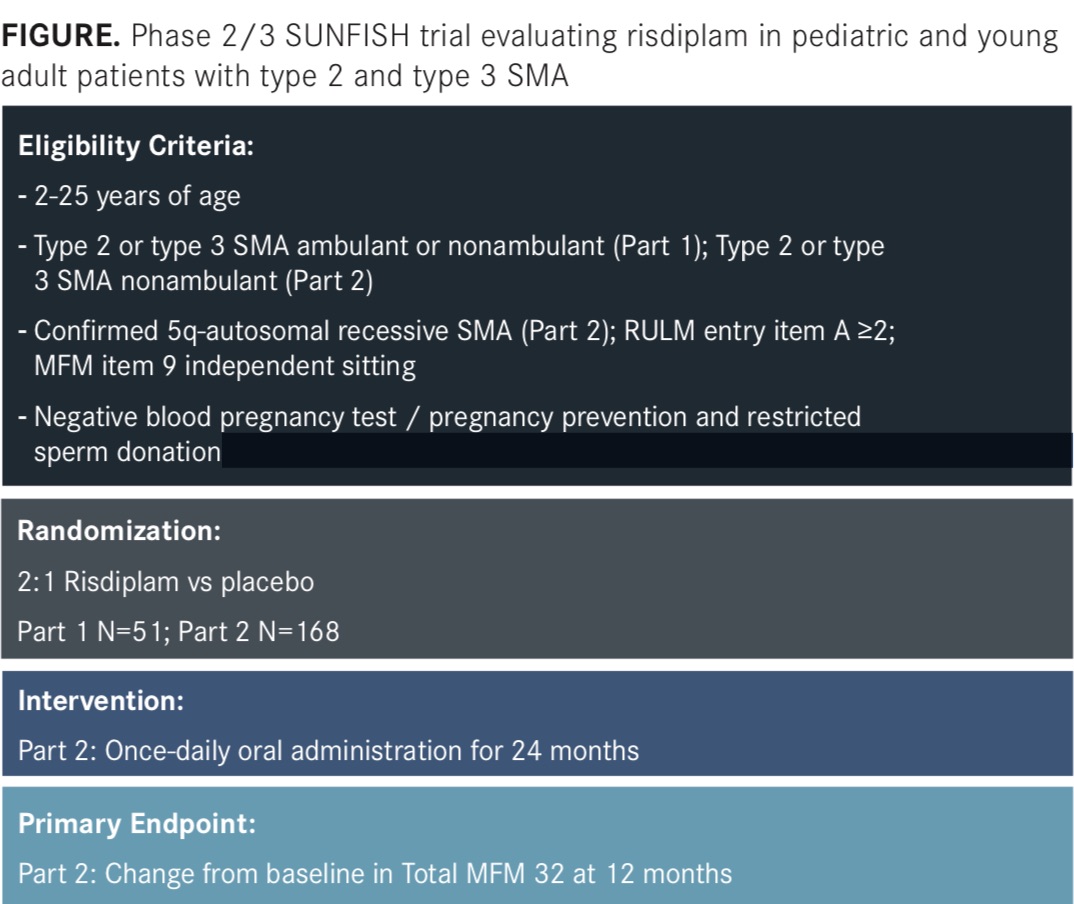 SUNFISH part 1 evaluated the safety profile and concentration of several risdiplam dose levels for 12 weeks in 51 participants; part 2 is assessing the safety and efficacy of the dose level selected from part 1 in 168 participants for up to 24 months, including change from baseline in Motor Function Measure (MFM)-32 score at 12 months.

Preliminary data from part 1, which was presented at the 23rd International Annual Congress of the World Muscle Society in Mendoza, Argentina, in October 2018, showed that 63.3% of participants receiving risdiplam for at least 1 year (19/30) experienced an improvement in MFM from baseline of 3 points or more. These improvements were observed in both participants aged 2 to 11 years (76.5%; n = 17) and 12 to 24 years (46.2%; n = 13). In addition, median increases in SMN protein greater than 2-fold were sustained over 12 months.

Serious adverse events that occurred in 2 or more of the 51 patients exposed to risdiplam were nausea (4%), upper respiratory tract infec- tion (4%), and vomiting (4%). No drug-related safety findings leading to withdrawal have been reported thus far.

“When you go into these older populations, inevitably, the population is more heterogenous in terms of their level of function when they enter the trial and their rate of progression,” Day concluded. “That’s where it gets to be challenging and that’s why you need to expand the number of patients in order to see those differences. I think we’re all optimistic that we’re going to see differences. The data to date [have] supported that, but I think that’s why we get into this situation of needing to expand the population.”