How Much Is Too Much? Debating Blood Pressure Control for Stroke 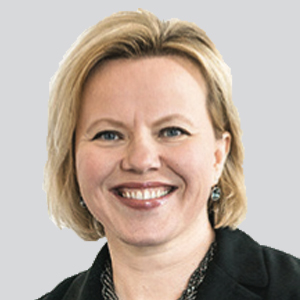 Natalia S. Rost, MD, MPH, FAAN, FAHA
According to the CDC, stroke affects more than 795,000 people in the United States each year. This breaks out to roughly 610,000 new cases and 185,000 recurring cases.1 Stroke also causes an esti- mated 140,000 deaths annually in the United States and is a leading reason for long-term disability and health care expenditures. Total stroke-related annual costs in the United States amount to approx-imately $34 billion, and this includes the cost of health care, medi-cations to treat stroke, and days of work missed. Over one-half of survivors older than 65 years experience reduced mobility as a result of stroke.1

Blood pressure (BP) control remains a critical cornerstone of stroke prevention efforts in high-risk patients. “Hypertension is the most important risk factor to control in order to reduce the burden of ischemic– and hemorrhagic stroke– related morbidity and mortality,” explained Natalia S. Rost, MD, MPH, FAAN, FAHA, chief of the Stroke Division in the Department of Neurology at Massachusetts General Hospital (MGH), associate director at the MGH Comprehensive Stroke Center, and professor of neurology at Harvard Medical School. “Furthermore, hypertension is responsible for the largest portion of the population-attributable risk of stroke. Thus, if we are ever to make a difference in stroke incidence and, as a result, decrease disability related to stroke on the population level, we absolutely must control hypertension.”

There is ongoing debate among experts regarding the role of intensive BP control in stroke prevention, and research findings on the topic are mixed. Nearly 2 decades ago, Lewington et al published a meta-analysis of 61 prospective observational studies that investigated the link between BP and mortality in 1 million adults with no history of vascular disease.2 Their results showed that “usual blood pressure is strongly and directly related to vascular (and overall) mortality, without any evidence of a threshold down to at least 115/75 mm Hg.”

Although this finding applied to all age groups examined, the strongest effect was noted for patients aged 40 to 69 years, for whom the differences in rates of death from stroke, ischemic heart disease, and other vascular causes were approximately 2-fold for each 20 mm Hg difference in systolic blood pressure (SBP) or 10 mm Hg in diastolic blood pressure (DBP). “All of these propor-tional differences in vascular mortality are about half as extreme at ages 80 to 89 years as at ages 40 to 49 years, but the annual absolute differences in risk are greater in old age,” Lewington and colleagues wrote. Similar age-specific associations were found for women and men and for ischemic and hemorrhagic stroke.

These results perpetuated the “lower the better” hypothesis, ultimately challenging the J-curve or U-curve association of BP levels in patients who have had a stroke, according to Craig S. Anderson, MD, PhD, professor of neurology and epidemiology at the University of New South Wales; clinical academic neurologist at Royal Prince Alfred Hospital in Sydney, Australia; and executive director of The George Institute for Global Health at Peking University Health Science Center in Beijing, China, who authored a 2019 editorial on the topic.3 Results of the SPRINT trial published in 20154 seem to align with the findings of Lewington and colleagues.2 Nondiabetic patients (N = 9361) with SBP ≥130 mm Hg and increased risk of cardiovascular events were randomly assigned to receive either intensive treatment with a target <120 mm Hg or standard treatment with a target <140 mm Hg. The mean SBP at 1 year was 121.4 mm Hg in the intensive-treatment group compared with 136.2 mm Hg in the standard-treatment group (FIGURE).4 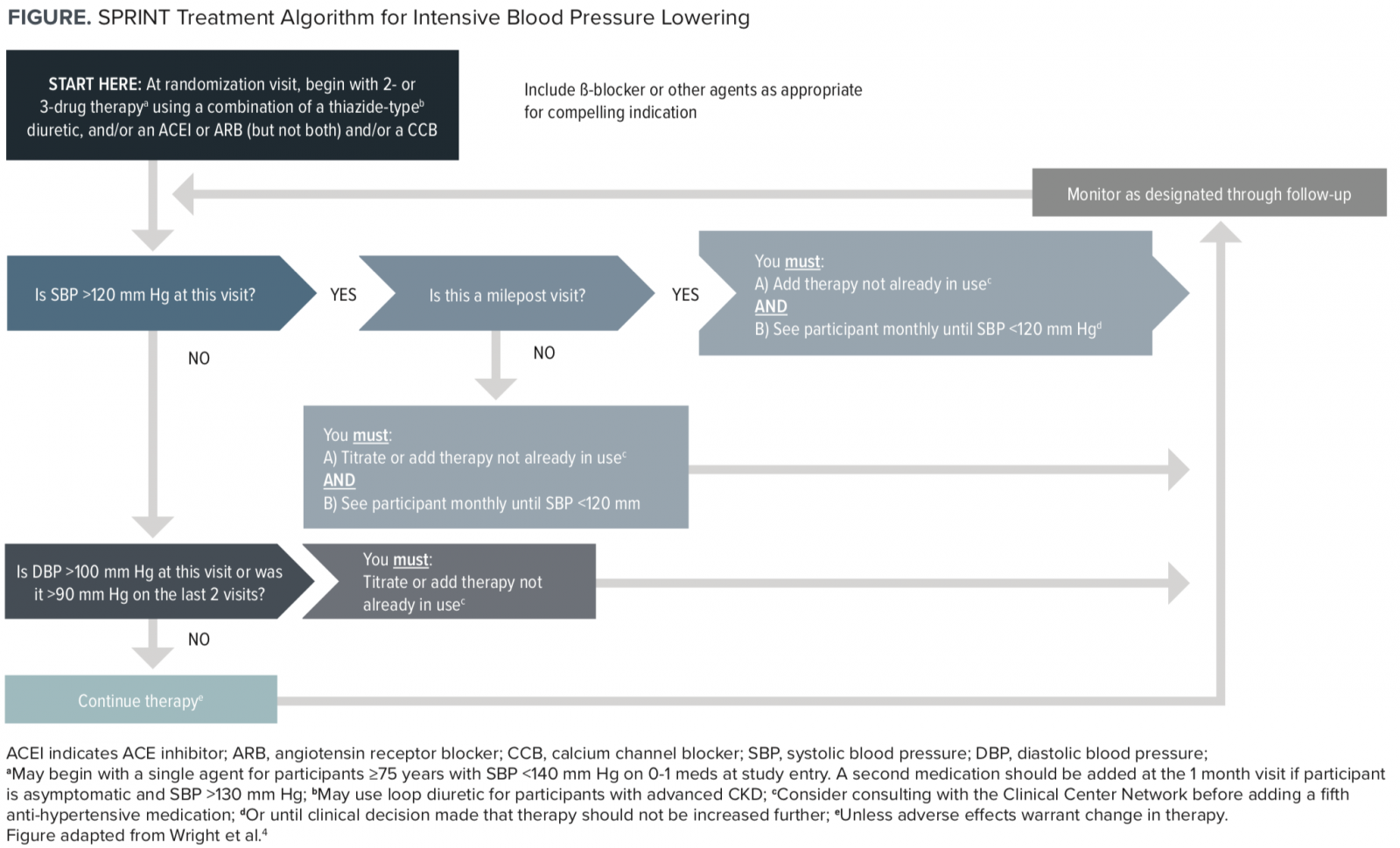 The trial was stopped early due to significantly lower rates of fatal and nonfatal cardiovascular events (1.65% vs 2.19% per year; HR with intensive treatment, 0.75; 95% CI, 0.64-0.89; P <.001) and all-cause mortality (HR, 0.73; 95% CI, 0.60-0.90; P = .003) with intensive versus standard treatment. However, the intensive-treatment group experienced higher rates of serious adverse events (AEs), including hypotension, syncope, electrolyte abnormalities, and acute kidney injury or failure compared with the standard-treatment group.

“Although SPRINT provides some reassurance that the benefits of more intensive BP lowering outweigh the justifiable concerns over harms, such as hypotension and renal impairment, especially in elderly individuals, the study has been criticized about the generalizability of the results to patients with a history of stroke...and about the use of unattended automated BP measurements to titrate therapy in a highly intensive monitoring schedule,” Anderson wrote.3

“While an intensive approach is supported by the results of the SPRINT trial, patients with a history of stroke—and diabetes for that matter—were specifically excluded from this study,” Anthony Kim, MD, MS, vascular neurologist and associate professor of neurology at the University of California, San Francisco (UCSF), and medical director of the UCSF Stroke Center, told NeurologyLiveTM. “In contrast, the SPS3 study, which specifically studied patients with a history of lacunar stroke, failed to establish a clear benefit of a lower blood pressure goal (<130 mm Hg) for secondary stroke prevention compared with standard care (130-149 mm Hg), although there were numerically fewer recurrent strokes seen with intensive blood pressure management.”5

More recently, the multicenter RESPECT trial (N = 1263) observed reduced stroke recurrence with intensive BP control (to <120/80 mm Hg) versus standard BP control (<140/90 mm Hg) in patients with a history of stroke in the previous 3 years.6 Additionally, the authors pooled their results with those of previous trials to conduct a meta-analysis, which revealed a significant 22% reduction in stroke recurrence associated with intensive treatment. “Intensive blood pressure control to less than 130/80 mm Hg is recommended for secondary stroke prevention,” they concluded.

Another study, the ADVANCE trial, examined the effects of intensive antihypertensive treatment in 10,948 patients with diabetes who had moderate to high stroke risk.7 Over 4.3 years, the authors found that intensive treatment with perindopril/indapamide led to lower SBP compared with placebo, as well as reduced all-cause mortality and major vascular events. These effects were not influenced by participants’ baseline SBP or DBP or 10-year cardiovascular disease (CVD) risk.

“We found no statistical evidence that cough and, in particular, hypotension/dizziness, both [adverse] effects common to antihypertensive therapy, were more likely to lead to permanent drug discontinuation in those with baseline SBP <140 mm Hg versus baseline SBP ≥140 mm Hg compared with placebo,” the authors reported.7 “Adults with diabetes mellitus appear to benefit from more intensive BP treatment even at levels of BP and CVD risk that some guidelines do not currently recommend for intervention.”

We have previously used 140/90 mm Hg as our general target for most [patients who have had a stroke], with the aggressive target of <130/80 mm Hg reserved for those with diabetes. The data from the SPRINT and RESPECT trials suggest that we should aim for this lower target in our overall population as well. Upcoming guidelines taking this new evidence into account will hopefully be available soon,” said M. Shazam Hussain, MD, associate professor of neurology at Cleveland Clinic’s Lerner College of Medicine and director of Cleveland Clinic’s Cerebrovascular Center. “Of course, this must be tailored to each patient’s specific situation. Conservative treatment may be indicated for very elderly patients or those with severe intracranial stenosis.”

Although many patients may benefit from intensive BP control, the data supporting this approach is currently stronger for primary versus secondary stroke prevention, Kim stated. “Furthermore, factors such as medication adverse effects; cerebrovascular anatomy, particularly when hypotension with flow-limiting vascular lesions is a concern; other comorbidities and frailty; and potential impacts on cognitive outcomes should be taken into account to personalize BP targets for individual patients.”

He noted that these issues pertain to chronic BP control rather than the acute phase following stroke, which may present more immediate concerns about hypoperfusion. “For secondary stroke prevention, a systematic approach to titrating therapy, with careful and coordinated longitudinal care, and attention to the possibility of AEs, is essential to achieving any blood pressure goal and becomes even more important if more intensive goals are pursued, since this often requires additional medications and potential for other attendant risks.”

“For my clinical practice, I will aim for a blood pressure target of 130/80 mm Hg with antihypertensive medications and use diet and lifestyle measures to further reduce blood pressure to <120/80 mm Hg,” Vivek Bhalla, MD,
assistant professor of medicine (nephrology) at Stanford University Medical Center and director of the Stanford Hypertension Center, told NeurologyLiveTM.

“How fast we achieve this goal depends on the severity and duration of hypertension and how well an individual adjusts to drops in blood pressure with initiation or escalation of antihypertensive therapy. This is particularly relevant for individuals with a prior history of stroke, as these individuals may be sensitive to a fast drop in cerebral perfusion pressure.”

"For secondary stroke prevention, a systematic approach to titrating therapy, with careful and coordinated longitudinal care and attention to the possibility of AES, is essential to achieving any blood pressure goal," said Kim.

“There are data showing that, as physicians, we do a poor job controlling hypertension even in patients who have survived a stroke—but we could reduce stroke recurrence, cardiac events, and mortality after stroke by more than 50% with improved blood pres-sure control,” Rost added. Decades of research demonstrate that stroke risk rises along with increases in BP, and results from studies of hypertension control in secondary stroke prevention support intensive management.

“More recent blood pressure studies have been largely set in the ‘primary stroke prevention’ setting in the general population, which is always the most heterogeneous group of individuals, with unique risk factor profiles and, possibly, subclinical conditions that are not accounted for,” she said. Despite the challenges that characterize such studies, Rost is “impressed at the overwhelming benefits of intensive blood pressure control, particularly with regard to cardiovascular mortality.” However, she reiterated the need to assess each patient individually to determine the potential risks versus benefits of intensive BP management, as there may be a segment of the general population that is at higher risk of compli- cations from this approach.

Among the remaining research needs pertaining to BP control and stroke prevention, some of the most important areas of focus are the mechanisms of disease, specifically the effects of long- term hypertension and resulting changes with intensive control, as well as the “complex interactions between vascular health and brain health, the so-called neurovascular unit and how it’s affected by chronic hypertension versus intensive blood pressure lowering,” Rost said.

“Related to the effects of hypertension on cerebrovascular health is the role of hypertension in the development or acceleration of neurodegenerative diseases of the brain, such as Alzheimer disease, vascular dementia, and vascular cognitive impairment,” she added. Although hypertension appears to be involved in the pathogenesis of these diseases, the underlying mechanisms have yet to be elucidated.

“Finally, understanding the hypertensive individuals who would unequivocally benefit from intensive blood pressure lowering versus those who may suffer [adverse] effects is the key objective and the essence of the personalized medicine approach that we hope to develop through ongoing and future scientific endeavors,” she said.

Additional research needs include BP control in a range of special populations, such as the very elderly and patients with severe stenosis undergoing medical management, to “discern the nuances of treatment, as opposed to prior studies that have grouped all stroke patients together, which can be a very heterogenous population,” suggested Hussain.

Further studies investigating the risks and benefits of a specific antihypertensive class, or classes, for secondary stroke prevention immediately following a stroke are also warranted, according to Bhalla. The American Heart Association, the American College of Cardiology, and other professional associations do not currently recommend a specific antihypertensive class for intensive BP control for long-term stroke prevention.

“Lowering blood pressure is the primary goal, but whether specific agents are superior to others in the initial poststroke period is unknown. Individuals are placed on multiple antihypertensive agents after stroke, and these may differ in inpatient versus outpatient settings,” Bhalla added.