With a positive track record in ALS, the investigational agent now sets its sights on the Alzheimer disease pipeline. 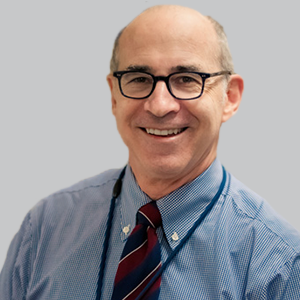 In June, Amylyx announced that it had completed enrollment and dosing in 96 of the previously planned 100 participants in the phase 2 PEGASUS trial (NCT03533257), which will assess the safety, tolerability, drug target engagement, and neurobiological effects of treatment with AMX0035 in patients with early dementia due to Alzheimer disease (AD) or late mild cognitive impairment (MCI).1

“In sporadic Alzheimer disease, for example, dysfunction in these pathways can be both a cause and consequence of amyloid-beta and tau pathologies, driven by a host of other cellular, genetic and environmental factors,” Steven E. Arnold, MD, PEGASUS principal investigator and translational neurology head of the Interdisciplinary Brain Center at Massachusetts General Hospital and Harvard Medical School, told NeurologyLive®.

The eligibility criteria for the 24-week, randomized, double-blind, placebo-controlled study is purposefully broad, which will allow the study to “assess the biological effects of AMX0035 across the disease spectrum,” Arnold said. “Further appreciating the heterogeneity of Alzheimer disease, we allow a diverse set of supporting biomarkers to determine Alzheimer’ disease diagnostic eligibility. Our hope was that this would open our study up to patients often ineligible for other trials while providing deep phenotypic insight into patients with a combination of neuroimaging, plasma, and spinal fluid biomarkers and multisequence MR imaging.”

Those eligible for inclusion in the study are between age 55 and 89, with Montreal Cognitive Assessment (MoCA) scores between 8 to 26 and a Geriatric Depression Scale score of less than 7. Patients with any central nervous system (CNS) disease other than suspected AD are excluded from the trial (FIGURE). 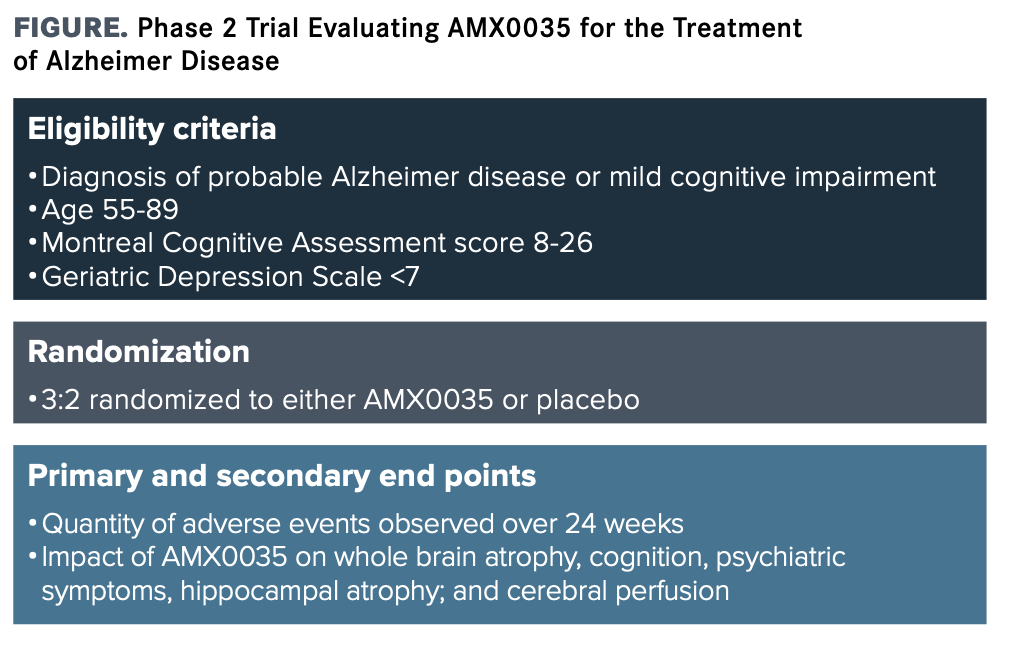 In addition to safety and tolerability, the study will focus on several disease-relevant brain biomarkers that be will be evaluated on both a composite and individual level. “These include cognition with established neuropsychological assessment and interview measures, hippocampal structure and function with MR neuroimaging, and cerebrospinal fluid and plasma amyloid, tau, and neurodegeneration biomarkers,” Arnold said, adding that the research teams will also examine more exploratory markers of inflammation and metabolism, as well. “Understanding how the drug may be working, and if a particular subset of patients is especially responsive in the phase 2 study, will allow us to tailor the design of a phase 3 study.”

The 2-drug combination approach makes AMX0035 1 of the more distinguished drugs making its way through the Alzheimer dementia pipeline. Arnold relayed that sodium phenylbutyrate is used in urea cycle abnormalities but also crosses the blood-brain barrier and is a histone deacetylase inhibitor. One of its main functions is to suppress the unfolded protein response which is overactive in AD. Tauroursodeoxycholic acid stabilizes mitochondrial membranes, thus improving the bioenergetics of cells. It can reduce or make cells more resistant to oxidative stress, while also working as a neuroprotectant by preventing apoptosis, he said.

“We recognize that there are a lot of mechanisms that are driving neurodegeneration in Alzheimer [disease], and if you just hit 1 thing and others are left unaddressed, you may have some very modest benefit, but you may have no benefit because everything else is working against the cell,” Arnold told NeurologyLive®. “By combining drugs to ameliorate the damaging effects of these different mechanisms that are active, overactive, or abnormally active in Alzheimer disease, we have a better chance of rescuing sick and dying cells.”

Confidence in the combination drug has only been bolstered by results from Amylyx’s CENTAUR trial (NCT03127514), where treatment with AMX0035 has been shown to be associated with a statistically significant (P < .05) slowing of amyotrophic lateral sclerosis disease progression based on change from baseline on the ALS Functional Rating Scale-Revised.2

Results from the PEGASUS trial are expected to be released in the first quarter of 2021. “We will work to accelerate patient access to AMX0035 according to any requirements issued by the FDA,” Arnold said.