Could expanding insights into the pathophysiology of autoimmune epilepsy offer seizure-free hope for patients? 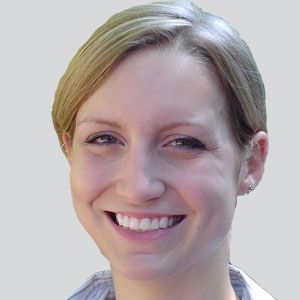 Although there have been relatively effective treatments for seizures since 1912, beginning with phenobarbital, the focus on the symptoms of epilepsy rather than the cause means that many patients with difficult to treat epilepsy still long for effective therapies. This is especially the case for autoimmune epilepsy, a under-recognized condition that is often unmanageable with conventional antiseizure medications.1 As a result, a truly “seizure-free” life has remained out of reach for many. This may be set to change as researchers continue to uncover the causes of different types of epilepsy and the mechanisms of action of different treatment modalities.

“Autoimmune epilepsy is essentially a seizure disorder where a neural-specific antibody is present, may be pathogenic, and may cause seizures,” said Lindsay Higdon, MD, a neurologist and epilepsy specialist at Jefferson University Hospital in Philadelphia, Pennsylvania. In one study, experts found that approximately 20% of unexplained epilepsy cases had evidence of circulating neural antibodies, suggesting an autoimmune cause.1 These antibodies can target antigens present on neural surfaces or within the neural cell.

Over the past decade, several neural surface antigens and intracellular antigens have been found and documented in patients presenting with epilepsy, and in 2017, autoimmune epilepsy was officially recognized as a distinct entity by the International League Against Epilepsy.2

When to Suspect Autoimmune Epilepsy

“There are several clues,” Sarosh Irani, BMBCh MA (Oxon), DPhil, head of the Oxford Autoimmune Neurology Group and associate professor at Oxford University in the United Kingdom, told NeurologyLive®. “These patients often present with an explosive onset, and a higher frequency of seizures than normal.” Most of these patients also present with other features of autoimmune encephalitis, such as memory disturbances, mood changes, and changes in personality. Some patients experience faciobrachial dystonic seizures, which are essentially diagnostic of an underlying antibody.

Patients with autoimmune epilepsy can also show characteristic MRI findings that are consistent with limbic encephalitis. A retrospective cohort study found that such patients usually demonstrated parenchymal atrophy that was disproportionate to age, or T2 hyperintensities in cortical or subcortical regions.3

To help clinicians make an early and accurate clinical diagnosis, Divyanshu Dubey, MBBS, and a team of investigators at Mayo Clinic have developed and validated a predictive tool.1,4 The APE (Antibody Prevalence in Epilepsy of unknown etiology) score takes into consideration the onset and progression of the seizure disorder, clinical signs, and MRI and cerebrospinal fluid (CSF) findings. If the APE score is greater than 4, there is a high chance that the epilepsy is of autoimmune origin.

Getting to the Root of the Problem

Once the cause is known, it makes sense to treat autoimmune epilepsy just like other autoimmune diseases—by modulating the immune system. “Along with antiepileptic drugs, we use either steroids, intravenous immunoglobulin (IVIG), or plasma exchange,” Higdon said. “All 3 treatments decrease immune-mediated inflammation in the central nervous system by suppressing or changing the immune system or removing anti- bodies.” Indeed, one study showed that immunomodulatory therapy led to a 19-fold increase in odds of a better seizure outcome, with plasmapheresis (odds ratio [OR], 32.5) proving to be more effective than intravenous steroids (OR, 8.25).1 In another study, about 75% of patients became seizure-free in the 2 months after starting immunotherapies.6

Many researchers are exploring IVIG—a concentrate of human antibodies obtained from healthy donors&mdash;as an alternative to steroids and plasmapheresis. Its administration is a simpler procedure compared with plasmapheresis and can help avoid the adverse effects of steroid therapy.

This form of treatment—flooding the body with more antibodies&mdash;may seem counterintuitive. However, IVIG is believed to stabilize and strengthen the immune system. How does this happen? “Currently, no one can answer that accurately, but there are a few hypotheses,” said Irani. “The IVIG possibly saturates the immune system, preventing key causative antibodies like leucine-rich glioma-inactivated 1 (LGI1) and contactin-associated protein-like 2 immunoglobulin G (CASPR-2) from functioning. IVIG antibodies could also directly interfere with these antibodies, or with their targets.”

A recent randomized controlled trial conducted at Mayo Clinic provided further evidence that IVIG was effective in reducing seizures in a cohort who met criteria for autoimmune epilepsy.7 Patients who tested positive for LGI1 antibodies and CASPR-2 were enrolled in the study. Of 8 patients enrolled in the IVIG arm, 6 showed more than 50% improvement in seizure frequency compared with none in the placebo group. After 5 weeks, 6 patients in the placebo arm of the trial who had persistent seizures were switched to IVIG; 4 of these then reported more than 50% improvement in seizure frequency. IVIG is still a relatively new treatment strategy and needs more research before it is adopted as the main modality of treatment. “We don’t know how it accesses the central nervous system, and how it affects B cells that produce target antibodies,” Irani said. “Assessing these factors could help identify groups of patients who would respond better to treatment.” Indeed, not all studies have shown favorable results with IVIG. For instance, one study showed a poor response rate in patients who tested positive for antiglutamic acid decarboxylase 65 antibodies (GAD-65); only about 32% of these patients responded to treatment with IVIG.8

Higdon clarified that the kind of antibody present could influence response to immunotherapy. “While antibodies to neural surface antigens (such as LGI1 and CASPR2) may respond well to immunotherapy, antibodies to intracellular antigens (like GAD-65) are less responsive,” she said. “This is because these antibodies may not be the cause of seizures, but more an epiphenomenon—a secondary symptom that occurs simultaneously with a condition but is not directly related to it.”

In a retrospective study of 50 patients, researchers showed that those who had antibodies to a neural surface antigen, the voltage gated potassium channel complex antigen, were more likely to become seizure-free compared with patients who had GAD-65 antibodies (FIGURE).9 Notably, those with antibodies to intracellular antigens may benefit from the addition of cytotoxic chemotherapy. 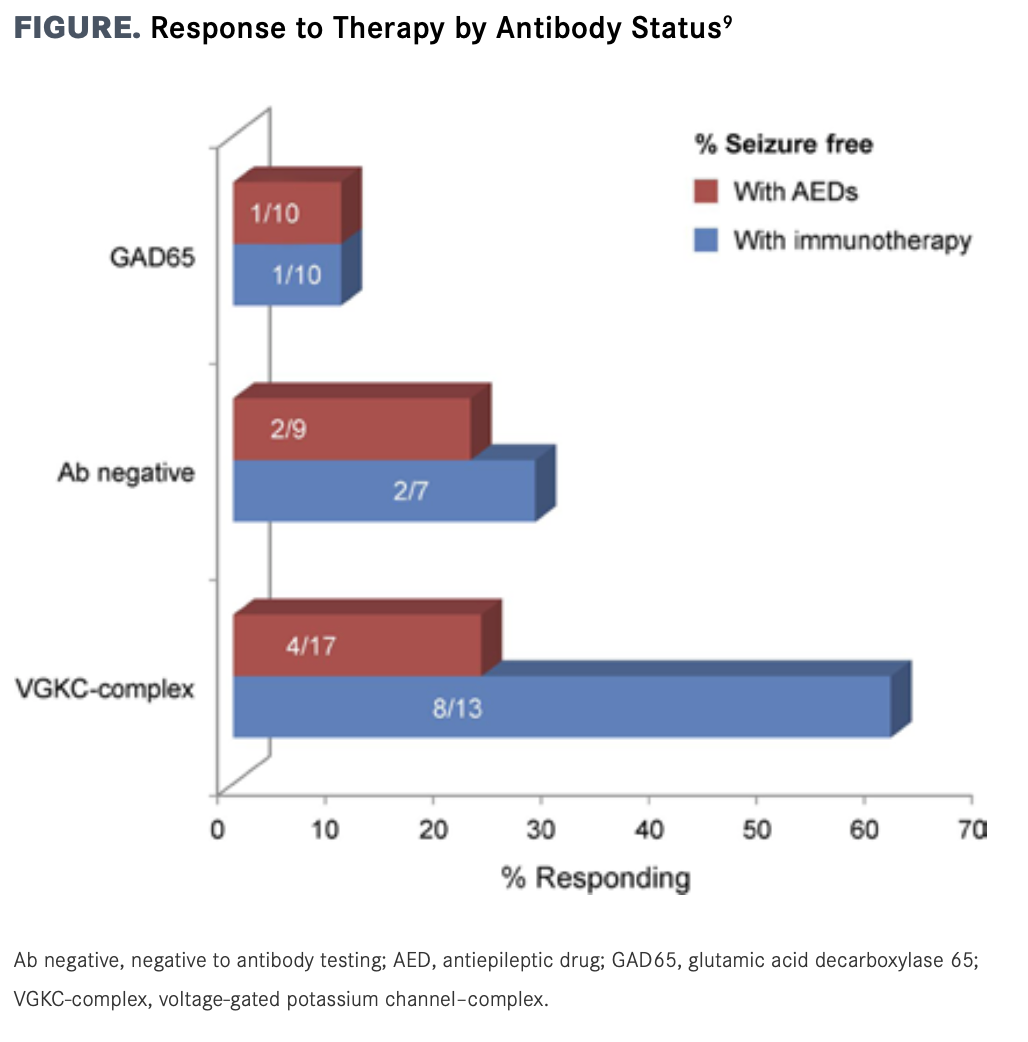 While IVIG may potentially be more convenient and safer compared with steroids and plasmapheresis, well-designed comparative studies are currently lacking. “Based on my current clinical experience, it is likely that steroids and plasma exchange will prove to be more effective,” Irani said. This opinion is partially shared by Higdon. Often, she said, “the response is transient and there needs to be repeated infusions or more aggressive immunotherapy with cyclophosphamide or rituximab.”

Many patients with autoimmune epilepsy can be successfully managed if a proper algorithm is followed, such as the one suggested by Higdon.10 “The first step, when you deal with a patient who has epilepsy of unknown origin, is to apply the APE score. If it is greater than 4, neural antibody testing should be carried out,” Higdon said. “Immunotherapy should ideally be initiated even before the antibody test results are received, either with steroids or IVIG.” She suggested that plasmapheresis be reserved for patients who fail to respond to previous treatments, or who have severe symptoms. If the antibody tests reveal the presence of an intracellular antigen, tumor screening must additionally be considered.

Of course, this fundamental algorithm does not cover all bases. “The ideal protocol for the duration of treatment and evaluation of response still needs to be developed,” Higdon said. It is also unclear if antiepileptic drugs can be tried again, if immunotherapy fails. In a retrospective study, a small proportion of patients did respond to antiepileptic drugs after immunotherapy had failed.8 The researchers stated that certain antiepileptics, like carbamazepine, also had immunomodulatory properties, and this dual effect could have been responsible for a seizure-free response in a small subset of patients.

Most experts feel that a better understanding of the pathophysiology of autoimmune epilepsy is the way forward. “We are currently focusing on how the B cells produce antibodies, and how these antibodies interfere with target antigens,” said Irani, whose most recent research has focused on exploring the characteristics and pathogenic potential of the LGI1 antibody. Understanding these key mechanisms could pave the way to establishing innovative methods of blocking the antibody effects.