Few prospective studies have been conducted to guide treatment decisions for this rare disorder. Now, a recent review describes the characteristics, diagnosis, and treatment of the group of neuromuscular disorder subtypes known as PPP. 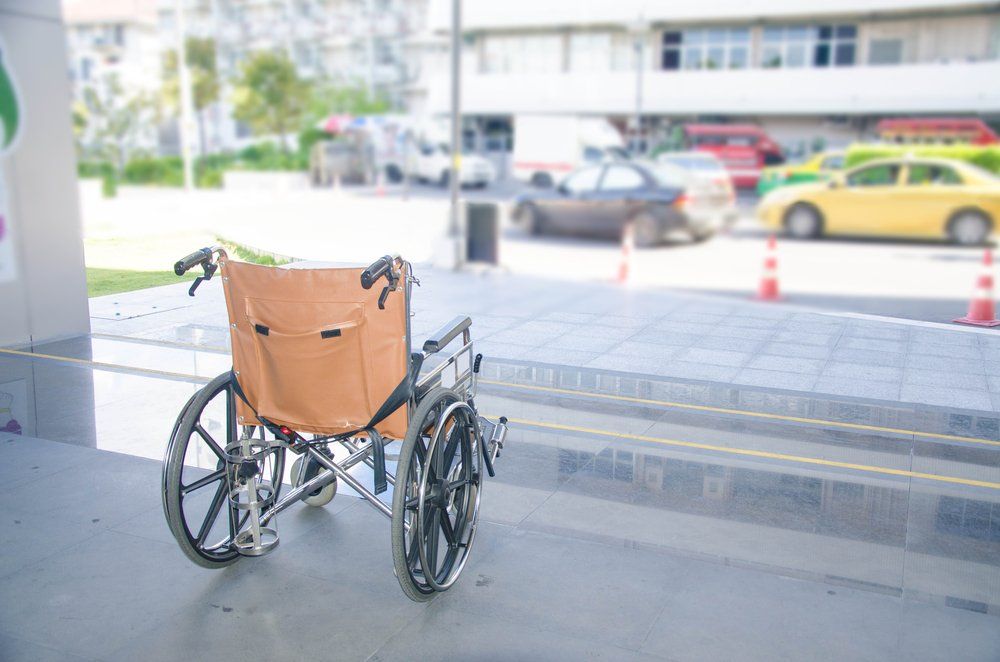 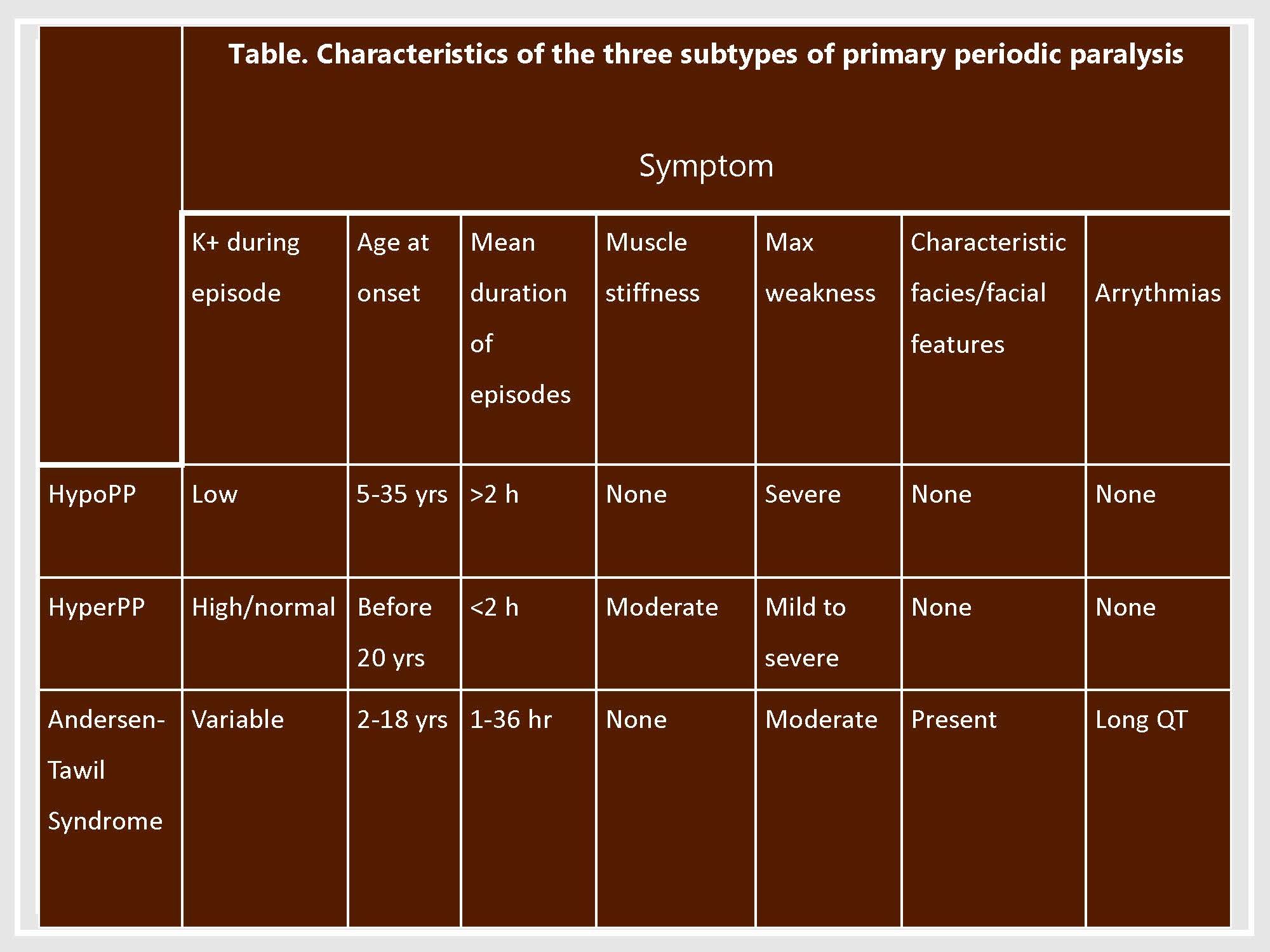 Table. Characteristics of the three subtypes of primary periodic paralysis

The review was published in the April issue of Muscle Nerve.1 “Because of their low prevalence in the general population, most experience with treatment for these patients is obtained from anecdotal reports. The present recommendations are based on a review of published literature with the exception of the Level I evidence supporting the use of dichlorphenamide in the long-term management of HypoPP and HyperPP,” wrote first author Jeffrey Statland, MD, of the University of Kansas Medical Center, Kansas City, and colleagues.

PPP is caused by mutations in the genes for sodium, calcium, and potassium ion channels in skeletal muscle, which generally follow an autosomal dominant inheritance pattern. The disease is characterized by episodic attacks of flaccid weakness lasting hours to days. Attacks are often triggered by diet or rest after exercise, and they are accompanied by changes in potassium levels. Weakness can persist later in life and require mobility aids in some cases, greatly affecting quality of life. Onset usually occurs in the first or second decades of life.

HypoPP, with a prevalence of about 1 in 200,000, is caused by mutations in calcium channel genes (CACNA1S) and sodium channel genes (SCN4A). Despite these different mutations, clinical symptoms are about the same. Attacks may occur in response to triggers, such as carbohydrate-rich meals, alcohol, and rest after exercise.

HyperPP, with a prevalence of about 1 in 100,000, is caused by mutations in the sodium channel gene SCN4A. Attacks are most common in the morning, and may be triggered by potassium-rich food, rest after exercise, fasting, cold exposure, emotional stress, and pregnancy. More than 80% of patients aged over 40 years have permanent muscle weakness, and about 30% have chronic progressive myopathy.

Andersen-Tawil syndrome, with a prevalence of about 1 in 1,000,000, can potentially be fatal. The condition can be caused by mutations in the potassium channel gene KCNJ2. While mutations causing HyperPP and HypoPP almost exclusively affect skeletal muscle, the diagnosis of Andersen-Tawil syndrome is more complicated. The condition can affect a wide range of tissues, causing cardiac arrythmias, distinctive facial features (low set ears, wideset eyes, broad forehead, small mandible), deformed fifth finger, fusion of toes 2 and 3, short stature, scoliosis, and other skeletal malformations.

Diagnosis of PPP relies primarily on clinical symptoms confirmed by genetic testing. About 30% of patients do not have a genetic mutation, in these cases subtypes of PPP are determined by clinical symptoms, potassium levels during episodes, and exercise testing. In the absence of a genetic mutation, other causes of PPP should be ruled out, such as renal, adrenal, or thyroid disease or medications such as laxatives or potassium-sparing diuretics.

Treatment consists of behavioral interventions, avoiding triggers, and modifying potassium levels through diet or medication such as diuretics, beta-adrenergic agents, and carbonic anhydrase inhibitors (acetazolamide and dichlorphernamide), as well as antiarryhtmics for Andersen-Tawil syndrome.

Treatment should be individually tailored based on PPP subtype. For example, only about 50% of patients with HypoPP and SCN4 mutations may respond to acetazolamide. Paradoxically, some may experience worsening of symptoms, which may respond to dichlorphenamide.

Individualized treatment is particularly important for Andersen-Tawil syndrome, depending on whether potassium levels are low or high. Certain medications that can exacerbate cardiac arrythmias should be avoided. These include: inhaled salbutamoil, thiazide diuretics, lidocaine, mexiletine, propafenone, and quinidine.

Because of the rarity of primary periodic paralysis, few prospective studies have been conducted to guide treatment decisions. Most recommendations are based on anecdotal evidence and case reports. The exception is dichlorphenamide, which has been studied in 4 RCTs and received FDA approval in 2015 for treating PPP.

• PPP often follows an autosomal dominant inheritance pattern, with mutations affecting sodium, potassium, or calcium channels in skeletal muscle, although the mutation for Andersen Tawil syndrome can affect a broader range of tissue and cause cardiac arrythmias

• Diagnosis relies on clinical symptoms confirmed by genetic testing; 30% of patients may not have a genetic mutation

• Treatment should be individualized, especially for Andersen-Tawil syndrome