Teenager Who Sleeps Up to 20 Hours a Day

EEG and brain MRI findings are normal-what do you suspect? 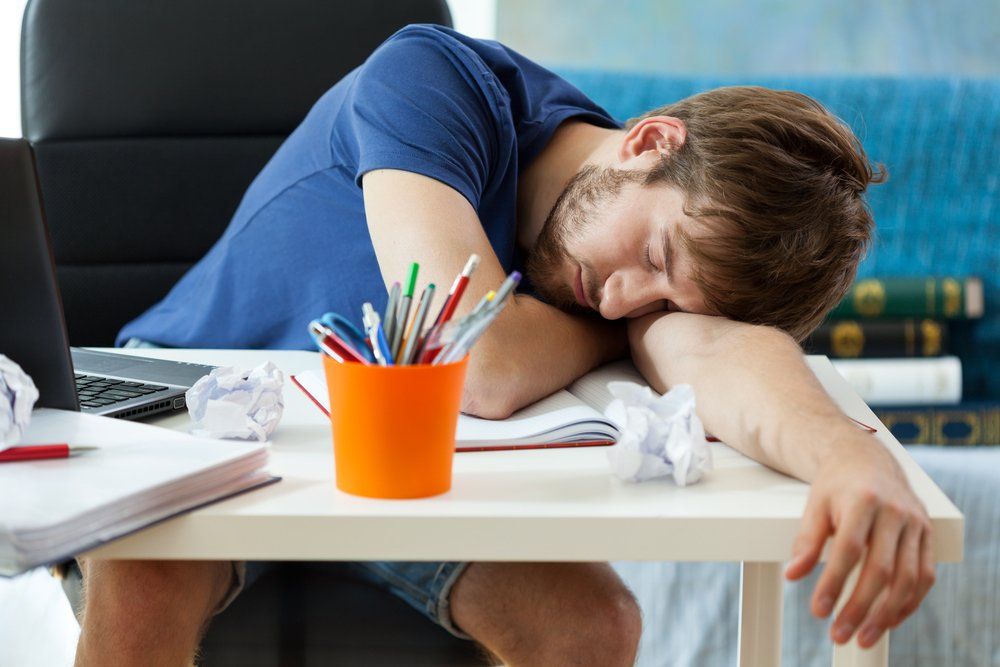 The parents of a 16-year-old boy are concerned because he has been sleeping almost all day for over a month. Initially, his parents thought he had a viral infection, and he stayed home from school for several days. When his condition did not improve after a week, they took him to the doctor.

He has had some diagnostic tests, still does not have a definitive diagnosis, and continues to be unwell. He is awake for about 5 hours a day, during which time he is groggy and hungry. He eats well and uses the toilet during the time that he is awake.

He says that he feels sleepy almost all the time and wishes he did not need to sleep so much. He does not recall his dreams, including any nightmares. He has no other symptoms such as pain, stomach upset, dizziness, or fevers. He denies stress, anxiety, depression, or any issues such as bullying or upsetting events.

When he was 13 years old, a similar episode occurred during summer vacation; his condition improved by the time school started. His parents have not had similar symptoms; both are in good health.

The patient is afebrile and appears well-nourished. He seems very tired and his eyes are deep set, with the appearance of “bags under the eyes.” He is cooperative, but his eyelids shut slowly every few minutes and he seems as if he is about to fall asleep in the exam room. He is oriented and does not have aphasia or dysarthria. No involuntary movements or jerking is noted. He does not seem to be having delusions or hallucinations.

His skin appears normal. Breathing is normal and regular, and his chest is clear. Pulse is regular, with normal heart sounds. Abdomen is non-distended and is not tender.

Facial movements and sensation are normal and symmetric. His pupils are equal, round, and reactive to light, and he does not have papilledema.

Motor strength is 5/5 in bilateral upper and lower extremities, and sensation is intact to light touch, pinprick, vibration, and proprioception. Coordination is normal, without dysmetria, and he does not have ataxia. Reflexes are normal, and he can walk heel to toe without difficulty.

A urine toxicology screen does not show any substances of abuse. The results of an electroencephalogram (EEG) and a brain MRI scan are normal. A polysomnogram shows normal sleep architecture.

The patient received a diagnosis of Kleine-Levin syndrome (sometimes spelled Klein Levin), a rare condition that can affect adolescents and young adults. It is more common in males than in females, but it can affect females as well. It is characterized by bouts of excessive sleepiness that last for weeks or months. His previous episode when he was 13 may have been a viral illness but could have been an earlier bout of this condition.

Young people with Kleine-Levin syndrome can have episodes characterized by sleeping for up to 20 hours per day. Fevers, muscle aches, and hyperphagia can accompany the episodes. Other behaviors that can occur during the episodes include moodiness, confusion, hallucinations, and uninhibited sexual behavior.1

Episodes of Kleine-Levin syndrome may last for several weeks or months. The condition resolves on its own without treatment. Episodes may recur several times throughout adolescence, and teenagers may have completely normal behavior and sleep patterns in between bouts of the illness. It is not associated with between-episode psychiatric problems, psychosis, behavioral problems, personality disorders, or drug use.

Kleine-Levin syndrome is a clinical diagnosis because there is no diagnostic test to identify or confirm the condition. It has been postulated to be triggered by a viral illness or hormonal dysfunction. Because of the symptoms, it may be mistaken for temporal lobe epilepsy, although electroencephalography can help distinguish the two conditions. The EEG tends to be normal. The polysomnogram shows decreased sleep efficiency with frequent waking from stage 2 sleep, normal sleep architecture, and an absence of shortened sleep latency or early REM sleep.2 These findings may occur with some other causes of adolescent and young adult hypersomnia, such as sleep deprivation or narcolepsy.

Standard imaging tests are normal, but functional MRI (fMRI) may show hypoperfusion and altered glucose metabolism in the tempoparietal and thalamic regions. Decreased connectivity between frontal eye fields and areas of the pons involved in REM sleep has been observed on fMRI, but the clinical significance of this finding is not clear.3

Lithium, valproic acid, and corticosteroids have been tried with some symptomatic improvement, but most patients do not respond to treatment.

Kleine-Levin syndrome has a reasonably good prognosis, with individual episodes spontaneously resolving, and a decrease in or complete discontinuation of further episodes during adulthood. Nevertheless, the illness has a substantial impact on quality of life, possibly affecting school work, social life, and participation in normal teenage activities. Support for families, including educating parents and the patient about potential complications such as hallucinations and emotional instability, can help in coping.