The research fellow in the Department of Radiology at Mayo Clinic Jacksonville spoke about the reasoning for conducting this study and what the findings mean for physicians in clinical practice.
By: Matt Hoffman
Published: May 22, 2019 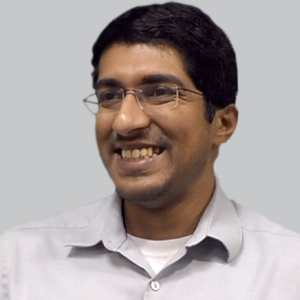 George Vilanilam, MBBS
Recently, a study presented at the American Academy of Neurology (AAN) Annual Meeting in Philadelphia, Pennsylvania, found that it may be reasonable to screen patients with moderate-to-severe obstructive sleep apnea (OSA) and atrial fibrillation (AF) for cerebral microbleeds (CMBs).1

To find out more about the reasoning for conducting this study and what the findings mean for physicians in clinical practice, NeurologyLive® spoke with lead author George Vilanilam, MBBS, research fellow, Department of Radiology, Mayo Clinic Jacksonville.

NeurologyLive®: What prompted this work in OSA and cerebral microbleeds?

George Vilanilam, MBBS: We are currently studying this entity called a CMB. It’s been gaining a lot of interest in the community and the reason being is that there’s not a lot known about it. The things that we do know about it—we’re not sure about how much of an impact it makes to decision-making around anticoagulating and everything else. This is basically a smaller subset of a much larger study that we are doing. We want to study the effect of OSA and the severity of OSA on the burden of CMB on patients with AF.

So CMBs by themselves are round ovoid areas they are basically an MRI artifact. They can be seen on a brain MRI as a signal void. So, if we look at sequences which specifically show CMBs, these are the SWI (susceptibility weighted imaging) or the GRE (gradient recalled echo) sequences, they are seen as signal voids—really dark areas. So traditionally dark areas in SWI or GRE, they’re referred to as hemosensitive things on MRIs. It could be anything with blood—hemiparesis, or in this case, these are CMBs.

Could you provide some background information for the study?

Like any other adult study, we studied adult patients that had documented AF on their medical records with at least 1 CMB on their brain MRI within the last 3 years, 2015 to 2018. We had 3 independent reviews: we read original brain MRIs, and we excluded all kinds of CMB mimics. These mimics are usually like any other blood content like hemorrhage in that area, or blood vessels, sometimes even metallic artifacts or sometimes traumatic chemocentric deposition. These are not truly CMBs.

After excluding them we had a very homogenous group of patients who had AF and CMB and OSA. We studied multiple factors within their OSA diagnosis that we usually diagnosis OSA from their polysomnography (PSG) reports, and multiple indices from the polysomnography reports these were things that the we associated with CMB burden we wanted to see if there was an association between CMB burden and these indices.

About 312 patients with concurrent AF and CMB were studied, and about 28%—that’s about 87 of those patients had a PSG study. Most of our patients were male, about 75% of them, and most of them were 75 years old. The mean AHI was 24.2 ±20.2. The grading or severity of OSA is graded by AHI, so a normal AHI would be considered to be less than 5, where mild would be considered to be between 5-15, and moderate is 15-30. Anything above 30 is considered severe. Our median was about 24, which is in the moderate sleep apnea range.

What were the findings of this study?

We had a significant association between moderate to severe—that’s with those with AHI >15—and the number of CMBs overall. We had a relative list of about 3.4 with a P-value of 0.001. This is a very significant result when we compare OSA to CMBs, and particularly, lobar CMBs and deep CMBs. CMBs are divided into lobar and deep CMBs, and we found that there was significant relation to both, on universal analysis.

Now, the moment we adjusted for age and BMI, we found that this association lost significance and there are 2 reasons why this could have happened. The number of patients that we had: even though we had 312 patients, the number of patients who had a PSG study were about 28%—that’s about 87 patients, so that’s a lower number. But we feel like with a much larger population with more PSGs documented, we might be able to get a much more significant result or find out more about relationships between other PSG studies—something that is yet unknown. Like I said, this is something that we’re doing as part of a much larger study. We’re in the process of so hopefully in the next few years we’ll have a much more definite answer.

What’s the impact of this data on the clinical community?

Although AHI is not found to be an independent risk factor in CMBs after adjusting for BMIs and age, it might be reasonable for patients with moderate AHI to be screened for CMBs because the importance of screening for CMBs and the high burden of CMBS.

So, although this threshold is not definitively known, for those with a high risk of CMB burden it might alter their antithrombotic treatment decisions. That is very important to the community.  Every other patient who comes to our outpatient department has to be anticoagulated either for prevention or for treatment purposes. Those with a population or cohort of patients with moderate to severe OSA and AF—they should be screened for CMBs.

A simple brain MRI can show whether they can have a high CMB burden, and that might be, in fact, from antithrombotic treatments. In fact, some physicians—a lot of physicians but this is very divided—are afraid of anticoagulated patients with CMBs. On the other hand, there are a lot of physicians who feel like CMBS have no relationship to inclusive bleeding and other factors and their antithrombotic positions don’t change. We feel like this is very important in adding additional information to this small entity in neurology.

Were the findings surprising or unexpected in any way?

For us, the main finding was not surprising because it has not been documented yet. I should’ve mentioned, initially, that even though OSA has been studied, that these factors by themselves have not been studied before. So even though this is what we would’ve expected theoretically, this is the first time it’s been proven.

We’re kind of disappointed that the other indices of PSG like arousal index, periodic limb movements, and oximeter, and Epworth Sleepiness Scale were not significant. The patients that had PSG studies were less than one-third of patients that we had, so that could be a big reason why we didn’t have a significant result with them. Although we were happy with one significant report, we weren’t with the indices of another. But that might be exciting to see those results in another study.