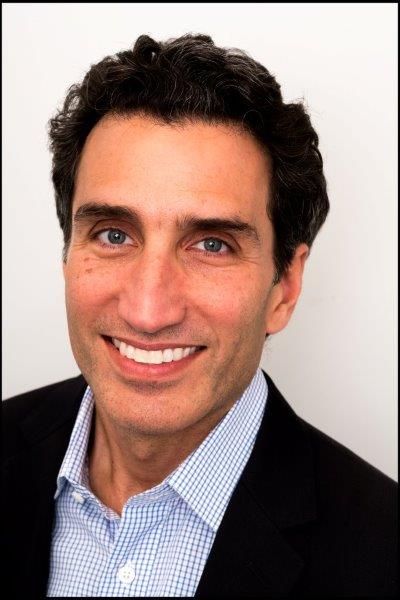 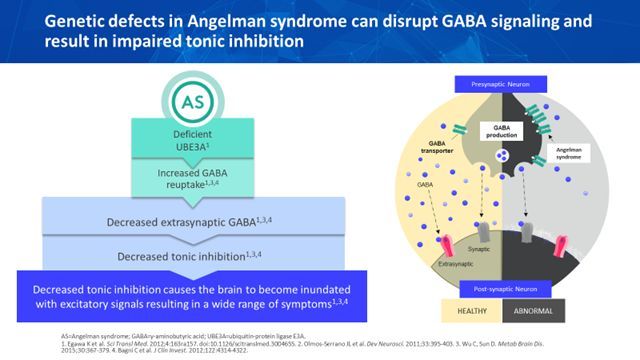 Neurodevelopmental disorders are a clinically heterogeneous group of conditions that affect early brain development and may lead to chronic and pervasive disabilities in cognitive, behavioral, and motor function. Other organ systems, such as cardiac, endocrine, gastrointestinal, and renal may also be involved. Most disorders, regardless of etiology, that become evident in early life and are chronic in nature can be considered neurodevelopmental.

Angelman syndrome (AS) is a rare, genetic, neurodevelopmental condition characterized by intellectual disability, seizures, ataxia, and severe impairments in speech, behavior, motor skills, and sleep. Developmental delays may become apparent by six months old but the typical clinical features of AS often do not emerge until around one year old or later. Features specific to AS include inappropriate laughter and smiling with a happy demeanor, combined with hand flapping, hyperactivity, tremors, and ataxia.

Dysmorphic features may be present and include microcephaly, prognathia, wide mouth, widely spaced teeth, and hypopigmented skin. The prevalence of AS is approximately 1 in every 10,000 to 24,000 live births and it affects males and females equally.1-3 AS is confirmed based on molecular methods, such as DNA methylation analysis, followed by fluorescent in situ hybridization (FISH), chromosomal microarray, or gene sequencing to determine the type of genetic defect.

AS is caused by disruption of the maternally inherited ubiquitin protein ligase E3A gene (UBE3A), located within the chromosome 15q11.2-q13 region. Mutations in the UBE3A gene lead to impaired expression of UBE3A protein and cause decreased degradation of gamma-aminobutyric acid (GABA) transporter 1 (GAT1), among other critical proteins. GAT1 is the primary GABA transporter, responsible for the uptake of GABA following its release into the extracellular synaptic and extrasynaptic space. If UBE3A protein is deficient, GAT1 is not degraded and the increase in GABA transporters leads to increased GABA uptake. This increased GABA uptake causes reductions in GABA in the extracellular fluid, especially in the extrasynaptic space.4 Reduced extrasynaptic GABAergic neurotransmission results in decreased tonic inhibition and may contribute to the underlying biology and clinical symptoms of AS.

Neurodevelopmental disorders like AS are notoriously challenging to treat given their complexity and the heterogeneity of clinical symptoms. While preclinical studies have shown therapeutic promise across a wide range of neurodevelopmental disorders caused by single gene mutations (eg, Fragile X syndrome, tuberous sclerosis, Rett syndrome), clinical trials have typically failed, in part due to the lack of objective outcome measures. These challenges have discouraged industry and academia alike from pursuing treatment development, despite the grave and high unmet need.

More recently, the genomic revolution has led to increasing opportunities to address these complex conditions, taking a genetics-first approach. Despite previous failed trials, studying clinical populations with shared biology based on genotype may increase the chances of demonstrating meaningful effects, assuming targeted therapeutics are applied. In addition, ongoing work in biomarker discovery will eventually dramatically improve clinical trial designs, and hopefully, success rates. Further, it is likely that treatments developed for specific neurodevelopmental disorders, like AS, may also be relevant for other disorders with overlapping biological underpinnings.

To date, pharmacological treatments in AS have relied on symptomatic strategies mainly unrelated to what is known about the neurobiology of the disorder. Experimental therapeutic trials with a variety of medicines (eg, minocycline; levodopa; pro-methylation dietary supplements) have been more targeted and biologically plausible but have likewise failed despite positive preliminary preclinical data.

With advances in genetic technology and improved access to testing, it is likely that more cases of AS will be identified in the future. Given the high unmet need, it is critical to develop novel and more targeted therapeutics to address the global developmental impact of AS. OV101 (gaboxadol) is a highly selective extrasynaptic GABAA receptor agonist which binds to the delta-subunit-containing extrasynaptic GABAA receptors.6 OV101 acts as an orthosteric agonist and restores deficits in tonic inhibition in mouse models of AS.7

Listen to the podcast: Phase 2 Trial for Angelman Syndrome Underway

Taking a genetics-first approach, Ovid Therapeutics recently completed the first industry-sponsored trial in AS. STARS was a Phase 2, 12-week, placebo-controlled, parallel group study in adolescents and adults with AS. The primary objectives were to evaluate the safety and tolerability of two different doses of OV101 in AS. Exploratory objectives included efficacy assessments on global clinical functioning, motor function, sleep, and behavior.

Results suggest that OV101 was generally safe and well-tolerated with improvement on measures of clinical global improvement, sleep, motor function, and behavior. Based on results from the Phase 2, a Phase 3 multi-site trial to demonstrate the efficacy of OV101 in treating symptoms of AS has been initiated.

• AS is a severe neurodevelopmental disorder that results from UBE3A mutations which cause loss of tonic GABAergic inhibition.

• There are currently no established treatments for AS that target the underlying biology of the condition.

• OV101 is a GABAA receptor agonist that may restore deficits in tonic inhibition and address the pathophysiology of AS.

• STARS was the first industry-sponsored Phase 2 trial in AS which demonstrated that OV101 is generally safe, well tolerated, and associated with global improvement in AS symptoms.

Dr Kolevzon is a child and adolescent psychiatrist and Professor of Psychiatry and Pediatrics at the Icahn School of Medicine at Mount Sinai in New York. He serves as the Director of Child and Adolescent Psychiatry for the Mount Sinai Health System and the Clinical Director of the Seaver Autism Center for Research and Treatment at Mount Sinai.

The author reports that he receives research support from AMO Pharma and acts as a consultant for Ovid Therapeutics; Takeda; Coronis Neurosciences; 5AM Ventures; LabCorp; and Sema4.